Leighton Meester Talks Filming 'The Weekend Away' Away from Her Family: 'That's Always Hard' (Exclusive)

Meester also spills on a trip she took that ended in someone getting punched and teases new music.

For Leighton Meester, filming the new Netflix thriller “The Weekend Away” meant some time away from her own family, something the actress admits is never easy.

Adapted from Sarah Alderson’s book of the same name, Meester stars in the film as Beth, a mom who joins her best friend in Croatia for a weekend-long vacation — her first since welcoming her first child with her husband. The trip goes to hell, however, when her friend winds up dead and she becomes the prime suspect.

Thankfully, Meester hasn’t had any vacations go awry quite as horrifically as Beth’s, but she told TooFab she could relate to the struggles that come with being away from your family while filming the movie overseas. The actress welcomed her second child, a baby boy, with husband Adam Brody in 2020. The two also share daughter Arlo, 6.

As far as vacation horror stories go, Meester does have one or two of those of her own too. Keep reading for our full interview below. “The Weekend Away” hits Netflix on March 4. 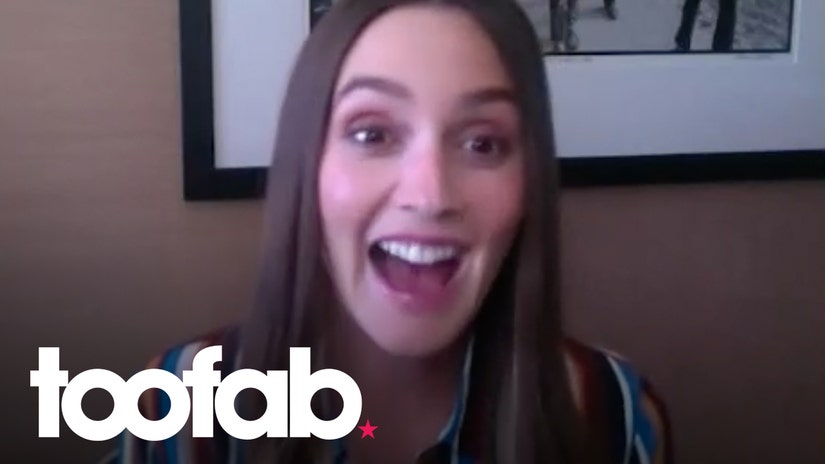 We haven’t really seen you in a thriller since The Roommate — which I love. This time, however, you’re the one in peril. Which is more fun to play: the villain or the one on the run?

Honestly, both. Can I do both? Can I do it back and forth?

Absolutely! What was it about this project that made it something you wanted to sign on for? I imagine being able to film in Croatia was a selling point.

Yes, that was definitely top of my list, one of the — sort of bucket list, honestly — places I wanted to go and I really love how it was captured in the film as this beautiful, picturesque vacation spot that honestly, juxtaposed against the tragic and tumultuous weekend, it’s quite lovely to look at.

We spoke to Sarah Alderson and she was saying one of the things she loved that you brought to this was that you were also, like your character, someone who just had a baby, going away on vacation … was this kind of a first big trip for you after welcoming your second kid too and did that help you get into that headspace?

Yeah, it did and yes it was. I didn’t get away from my child, he came. But it was my first time actually working after I had my second kid so that’s always hard. No matter how many times you’ve worked since you had kids, it’s just hard to leave them. It was tough at first, I mean, I felt that it was helpful even though I was with him during the evenings and on the weekends and everything. I was separated from my older child for about a month during filming, which was not cool. During Covid, it’s just kind of how it had to be. But, honestly, it did help me to an extent to tap into those on the surface kind of emotions that I needed to have access to, at the ready, so in that way it was good.

Now, hopefully you’ve never been framed for murder … but do you have any vacation horror stories you’d be willing to share?

To be honest, no! I’ve actually been thinking about this. I don’t really have any exciting or terrible vacation stories. There was one, I don’t even know if we have time for this, but I was on vacation with like a handful of friends and there was a guy that I was with — just a friend — and he got in a love triangle with a couple that we met on the vacation and I watched it all kind of unfold with our other girlfriends that were there and we were like, “This is weird.” Somebody got punched. Everyone was getting drunk, it was funny, but nothing too tragic, no.

I really like murder mysteries. I love crime stories, true crime, I consume that kind of thing. As far as horror and those kind of scary movies, those things just, I don’t know if I’m just like sensitive as I’m getting older, I’m too terrified that someone’s in the house. Or I have to consume it and watch something funny right afterwards to cleanse my palate. I did enjoy this because it kind of had a little bit of everything. Even watching it and having known everything in the film, even knowing the ending, it’s really fun.

Lastly, since your character in How I Met Your Father is a musician, we gotta ask … will we ever get new music maybe coming from you in the future?