Shorn of his lockdown mane but not his charisma, former UK Labour prime minister Tony Blair re-entered the political fray last week to tell his struggling party to go back to the past.

British Labour has endured four election defeats on the trot while the Australian Labor Party has been beaten in three. Both parties are led by men from the left faction who have hewn to the centre in the hopes of winning back voters worried by their predecessors’ expansive policy agendas. 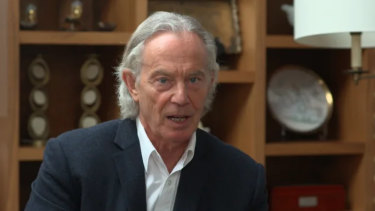 Tony Blair has issued dire warnings for the future of the centre-left if it doesn’t adopt his suggestions. Others see his prescriptions as the self-serving claims of a man who soared to government only to lead the country into the Iraq War.Credit:ITV News

Blair’s prescription for the centre left? Go further. In the face of rapid technological change, Labor should abandon its faith in big government and big taxes; keep values of social justice and equality but be prepared to use right-wing methods to get there; invest in infrastructure and overhaul services, he wrote in an essay in The New Statesman.

None of that is vastly different from Labor’s approach here but Blair advocates one sharp change. The centre left, he says, is failing to participate in the culture wars by either denying their existence or staying mum. That leaves the space, which includes everything from trans issues to racial justice and police reform and climate change, to the far left. They go too far and are pilloried by the right, Blair believes, leaving the whole left’s electoral standing sullied by association.

In Australia, climate change has occupied much of that space in the national discourse, become a defining issue since John Howard lost to Kevin Rudd, who was elected in 2004 with a strong platform on emissions reduction.

Joel Fitzgibbon, the member for Hunter and a persistent thorn in Albanese’s side for his views on coal mining, says Blair’s assessment is “spot on”. 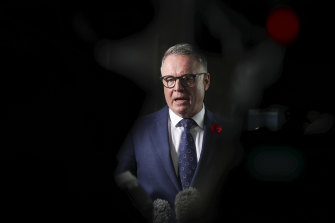 Joel Fitzgibbon has spoken darkly of Labor’s electability if it does not offer full throated support to fossil fuel workers.Credit:Alex Ellinghausen

“We’re going to have to be, I think, louder and more regular in our proclamations of our support for traditional industries like oil and gas and coal industries, and of course all those manufacturing sectors which rely upon them so heavily,” he says. Otherwise workers will see Labor’s climate rhetoric as a threat, Fitzgibbon says, pointing to Labor’s primary vote languishing in the 20s in areas like northern Tasmania and parts of Queensland.

He is dismissive of unions such as the Australian Manufacturing Workers Union that are “busy off talking about solar panels and wind generators, and all sorts of culture war issues and identity politics”.

The union’s national secretary, Steve Murphy, has been vocal about ensuring manufacturing workers have new green jobs to go to when heavy industry closes and says Labor wins elections when it is guided by its values, including on cultural issues.

“Working class people have the brains to contend with social issues,” notes Murphy.

Fitzgibbon does not disagree with Blair’s solution for arguments about climate change or any other contentious issue.

“The correct course for progressives on culture questions is to make a virtue of reason and moderation,” Blair argues. “To be intolerant of intolerance – saying you can disagree without denouncing.”

His answer echoes former US president Barack Obama’s instruction to young people to get over puritanical wokeness and find common ground with opponents.

“The world is messy; there are ambiguities,” he said in 2019. “People who do really good stuff have flaws. People who you are fighting may love their kids, and share certain things with you.”

Labor figures on both sides of the factional divide see some sense in Blair’s prescription on the culture wars.

“I thought that was the most interesting paragraph in the Blair article,” says New South Wales Labor senator Tim Ayres, a left faction co-convenor close to leader Anthony Albanese and a former staet leader of the Australian Manufacturing Workers Union.

But other elements, such as criticisms of unions, Ayres sees as the unhelpful thoughts of a man who led the UK into the Iraq War.

“It’s really Tony Blair in some sections of that essay, really just arguing to defend his own legacy, which is a hotly contested one,” Ayres says. 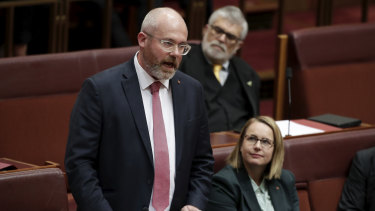 There is no shortage of polarised debates in Australia on which Labor could loudly stake out whatever it sees as a middle ground, most recently the debate about using the term “chestfeeding” rather than “breastfeeding”.

When asked about how to handle controversial issues neither Ayres nor Fitzgibbon want their leader spending too much time talking about trans issues, for example.

Ayres wants Labor “talking directly to the suburbs and the regions on the economic issues that are going to frame the next election” although he says Labor should have a “really clear” policy on issues such as trans rights.

It is hardly the kind of vocal position on social issues Blair urges.

Celeste Liddle, the commentator and unionist who is now running for the Greens against Labor in the inner Melbourne seat of Cooper, has the kind of politics that alarms Blair.

Equally, she has little time for his view that Labor should stake out the centre of cultural issues.

“I don’t know what the point of that would be, it’s kind of like they’re engaging with it but then they’re reinforcing the …. white Australian blokey sort of status quo,” Liddle says.

Liddle, who describes her politics as somewhere in the “socialist slash left-wing anarchist” and Indigenous space, acknowledges hard left stances have a ceiling of electoral popularity in the short term. But she argues that society has shifted radically in her 43 years and will keep moving, especially if people become more educated on things like Indigenous rights.

“If you are actually engaging in politics and you’re working for equality for as many different groups as possible, then the minorities get together and form a majority and so there is an opportunity to win through that,” Liddle says.