Labor aims for $1.9b from multinational tax crackdown

Labor plans to raise $1.9 billion from multinational businesses by cracking down on their use of debt to avoid taxes and making transparent their ties to global tax havens under a plan to be unveiled today.

Shadow treasurer Jim Chalmers and Labor’s finance spokeswoman Katy Gallagher will on Wednesday also reveal plans to cut public service outsourcing to contractors, labour hire firms and consultants by $3 billion, aiming for a 10 per cent reduction in their first year in office. 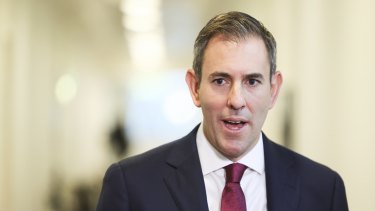 Shadow treasurer Jim Chalmers will on Wednesday announce Labor’s plan to raise $1.9 billion from multinational businesses by cracking down on their use of debt to avoid taxes.Credit:Alex Ellinghausen

The plan, to be released in Canberra, also confirms Labor will not adopt the Coalition’s 23.9 per cent tax-to-GDP cap, arguing no Labor government has never come close to the target which is unlikely to be reached until next decade.

Based on the Coalition’s own forecasts, the budget is forecast to remain in deficit for the rest of the decade and beyond with spending pressures growing in areas such as the National Disability Insurance Scheme, aged care, health and defence.

In their “economic plan and budget strategy”, Chalmers and Gallagher state the economy and nation’s finances need to be repaired and strengthened to deal with growing domestic and international pressures.

“As we emerge from the pandemic, Australia is unprepared for the most pressing economic challenges – rising inflation, falling real wages, and not having enough economic benefit to show for a trillion dollars in public debt,” they said.

Throughout the early stages of the campaign, Labor has stated it will tap multinationals for more tax to help pay for some of their pledges.

Over four years, it expects to raise $1.9 billion by building on already agreed principles put in place by the OECD that are aimed at protecting government finances.

They include supporting the OECD’s global 15 per cent minimum tax policy on the profits of large multinationals, particularly digital companies, limiting debt-related deductions by multinationals to 30 per cent of profits and limiting the “abuse” of tax treaties when holding intellectual property in tax havens.

It commits to “sensible and staged savings” from outsourcing arrangements which Chalmers and Gallagher said will reduce spending by $3 billion over the next four years.

Some of those savings will be spent on an expansion of the public service with an extra 1080 frontline staff for Services Australia, the Department of Veterans’ Affairs and the NDIS.

The Coalition has attacked Labor for not adopting its 23.9 per cent tax cap which was introduced by Scott Morrison. No government since John Howard in 2004-05 has breached the cap.

Chalmers and Gallagher will argue the cap has been breached on four occasions since Federation, all by Coalition governments.

“Labor is not attracted to the current cap and does not believe it needs to be revisited, given that both sides will not approach it in the forward estimates,” they said.

“The Morrison government is using it as a tool to distract from the fact that it is the second highest taxing government of the past 30 years, after the Howard government.”

Chalmers and Gallagher said the tax cap reflected an assumption that governments would return bracket keep to taxpayers when financial circumstances allowed.

They said this would also guide their approach to tax cuts.

“We will always prioritise working families and measures that stimulate growth in sectors that can unlock economic growth and opportunities,” they said.

Labor has also committed to an “internal audit” of what it describes as the Coalition’s “rorts and wasteful spending”. In 2013, the incoming Liberal government of Tony Abbott commissioned its audit of spending which contributed to its controversial 2014 budget.

Cut through the noise of the federal election campaign with news, views and expert analysis from Jacqueline Maley. Sign up to our Australia Votes 2022 newsletter here.