Kim’s Convenience, the hit that changed TV’s representation of Asians

This is the story of the little sitcom that could. It’s the story of how Kim’s Convenience, a dark, complex experimental Canadian stage-play about a Korean-Canadian family running a corner store but fractured by the schism between father and son, became a hit TV comedy, and then a global streaming superstar. And it’s the story of how the show has genuinely transformed Asian representation on the screen.

To call the show a slow burn is an understatement. Commissioned by the Canadian national broadcaster CBC, like another brilliant Canadian comedy Schitt’s Creek, Kim’s Convenience blossomed in its mid-life, aided by international release on Netflix. Its success has put one of its stars, Paul Sun-Hyung Lee, on The Mandalorian. And another, Simu Liu, in the upcoming Marvel movie Shang-Chi and the Legend of the Ten Rings. 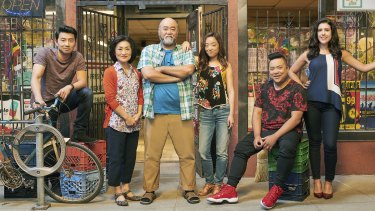 “It is such a surreal experience,” Lee tells The Age and The Sydney Morning Herald. “I can’t even begin to describe it. I use this phrase a lot, but it’s true, it’s like being Cinderella at the ball. For a number of years all of us just grinding it out, always wanting to do more, but always being denied the opportunity to audition because I was only seen as an Asian. I was never seen as an actor. Just Asian. Which is incredibly frustrating.

“The whole idea of people seeing the show outside of Canada, getting messages from Indonesia, Australia, and from Europe and Brazil, and Russia and Singapore … it was just like, what is going on here? And then another thing happened, the pandemic, which raised the profile of the show even more because everybody was looking for a show to bring them comfort.”

The story of Kim’s Convenience begins before its 2016 debut on CBC. The first grains of the story were laid down in 2005 when its creator Ins Choi was required, as part of a playwriting group, to present two scenes from a new work as an end-of-year assignment. Needing an older Korean actor to participate in the live reading, Choi found Lee who, like Choi, was the son of immigrant Korean parents.

“At that point I had been on Train 48 [the Canadian adaptation of the Australian drama series Going Home] and I had established a bit of a name for myself in the community at least, and I feel very strongly about giving back and helping the next generation,” Lee says. “I remember reading the first two scenes and, for me, I had never seen or read such an authentic portrayal of my parents before. And immediately that’s what struck me.” 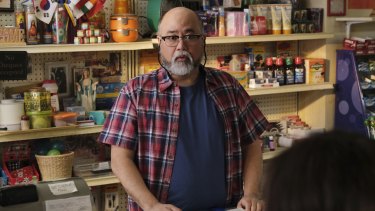 The project spent five years bouncing around a series of workshops. “He’d go off, he’d write and then he’d hire a bunch of actors and we’d get together for three or four days and we’d read the play and we’d ask questions and make suggestions,” Paul says. Critically – and in a twist to the tale that echoes the birth of Desperate Housewives and Mad Men – every theatre company in Toronto turned it down.

Then, in 2011, it debuted at the Toronto Fringe Festival, selling out its seven-show run in a 200-seat theatre. It starred Lee and his television co-star Jean Yoon as parents Appa and Umma, with Choi, who also directed, as estranged son Jung, and Esther Jun as daughter Janet. In 2013 the play toured nationally and, in 2016,a television adaptation was produced with Lee and Yoon, joined by Simu Liu as Jung and Andrea Bang as Janet.

The heart of the story can be found in a line from Choi’s original stage play: “My whole life is this store,” Appa says to his daughter. “This store is my story. You take over store, my story keep going.” It taps a kind of parent-to-child generational story framework which is evident in everything from The Bible to Star Wars.

“When you’re younger the generational hand-off doesn’t mean as much; that’s something that you really come to at a later stage in life,” Lee says. “How will I be remembered? And for a lot of people it’s very easy to grab onto something physical. Something that you’ve built from the ground up, that you want to pass on. Something tangible.” 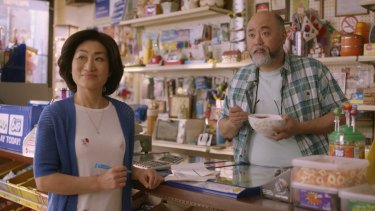 Jean Yoon and Paul Sun-Hyung Lee as Umma and Appa in Kim’s Convenience.Credit:CBC

In truth, the play in isolation is a dark and complex comic tragedy. It is set in the painful aftermath of Jung’s separation from his family, and time is essentially paused. “In the play the family is shattered, they’re playing out the clock,” Lee says. “It has been the same dreariness day in and day out because the family’s missing a part.”

“You can’t have that be a sitcom, so we realised that the tone of the play, part of it could carry through for the television audiences, but it had to be more gentle just to make it more accessible, more family friendly. And thus began the journey of the Kim’s family just becoming a little bit more gentle, just a little bit more broad.”

The dramatic heart of the show is the story of father and son and the awkward, tender road to reconciliation. “One of the things I think really separates Kim’s from a lot of other sitcoms is that heart where you get those devastatingly honest moments that aren’t funny, that just tear at your heart,” Lee says. “And then it’s followed by a laugh.”

Equally, Lee says, he had to fight to stop Appa turning into punchline-recycle-repeat in the style of Homer Simpson. “There’s a danger of just playing a buffoon,” he says. “That’s what you fight against as an actor, especially having the luxury of playing the same role for basically the last 10 years. There are times where you can have those laughs. I just don’t want him to become all that, so you need to earn those moments of just being silly, by being real.” 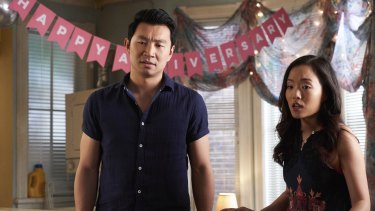 Simu Liu as Jung and Andrea Bang as Janet in Kim’s Convenience.Credit:CBC

Perhaps the most meaningful aspect of the show’s success is the way in which it talks to a cultural moment around Asian visibility on the screen. That spans Bong Joon Ho’s Oscar-winning film Parasite, to Tigertail, another Netflix comedy from Parks & Recreation writer Alan Yang. Plus Crazy Rich Asians, another Netflix teen romantic comedy series, The Half of It, and more.

The importance of meaningful representation cannot be understated, says Lee. “If you hire somebody just based on their skin colour or sexuality or gender, or any of that stuff, that’s tokenism, and you don’t want that,” he says. “You want to go in there and go, I got this because I was the best actor in the room. I think that’s what a lot of people want. They want that opportunity to go in and show what they can do.

“Even with George Takei on Star Trek, I didn’t want to be Sulu, it was like, hey, he looks like me, but I wanted to be Spock,” adds Lee. “And that’s the thing. It’s not enough just to have them there. You’ve got to give them something to do. Otherwise, it’s just window dressing. And audiences are ready for that, they’re hungry and looking for something else because we’ve been eating off the same menu for so long. Everybody wins when that happens.”

As for the impact, “I’m very conscious of that, I’ve got two sons who are very impressionable,” Lee says. “They look up on the screen and do they see themselves reflected there or not? It’s way better now than it was before, in my day, I’ll tell you that. And it does make a difference. I get notes and messages from kids letting me know it makes a huge difference and that it gives them hope.”

The show’s astonishing success saw it renewed for a fifth and sixth season – the fifth has just premiered on Netflix – but stresses on the production, Choi’s exhaustion and concerns from the cast about the lack of diversity in the writer’s room turned into a perfect storm for the series. Choi and co-executive producer Kevin Whyte left at the end of the fifth season, effectively cancelling the show.

All of the cast have spoken publicly of their disappointment. Liu highlighted the fact that the show’s writer’s room lacked both East Asian and female representation and, critically, “a pipeline to introduce diverse talents.” Liu also said story contributions from the cast were ignored. “Many of us in the cast were trained screen writers with thoughts and ideas that only grew more seasoned with time. But those doors were never opened to us in any meaningful way.”

“While representation in front of the camera was fantastic, I think we really sort of failed as a group in terms of representation behind the scenes,” Lee told Canadian media when the cancellation was announced. “We didn’t cultivate. We didn’t develop young writers or writers of colour or producers. It’s telling that they didn’t have anybody from within to step up who could have taken over the reins.”

When CBC confirmed the series would not return for a sixth season in March, the statement said they could not “deliver another season of the same heart and quality that has made the show so special” without Choi and Whyte. “Authenticity of storytelling is at the centre of the success of Kim’s Convenience,” the statement said.

And yet to some extent the behind-the-scenes remains largely untold. Choi wanted to spend time with his family, it has been reported. And when Lee tried to persuade him to return, he did not return Lee’s calls. “It’s a cautionary tale,” Lee says. “No matter how good it can be, if you don’t deal with issues from within and try to gloss it over because everything on the surface looks fantastic and idealistic, then you are just asking for trouble. I think that’s the unfortunate lesson from this whole thing.”

Kim’s Convenience is on Netflix.

Find out the next TV shows, streaming series and movies to add to your must-sees. Sign up to get it every Thursday.