Kate's couturier – and the sibling bond that's been a wild inspiration

Kate’s couturier — and the sibling bond that’s been a wild inspiration: Their careers could hardly be more different. But as top designer Jenny Packham faces her biggest test yet, the scrapes her BBC star brother Chris has got her into over the years means she fears nothing

When fashion designer Jenny Packham wants a frank opinion of her collection, she can count on her brother, nature presenter Chris Packham.

‘Every collection I’ve ever done I get quite a critique,’ she says cheerfully. ‘He’ll say: “That one was good, that one was rubbish.” But I don’t mind. In fact, I love the honesty.’

It’s hard to imagine a more improbable pair of siblings. Chris is the intense presenter of programmes such as the BBC’s Springwatch and Autumnwatch and notorious for his outspoken views on conservation that have led to him receiving death threats.

In contrast, Jenny, at 55, four years his junior, is the creator of exquisite wedding and evening dresses beloved of celebrities including Angelina Jolie, Kate Winslet and Jennifer Aniston. Then there’s the Duchess of Cambridge who, for years, has worn Jenny’s fairytale gowns to official events, even choosing her pretty day dresses for her first appearance outside hospital after the birth of each child. 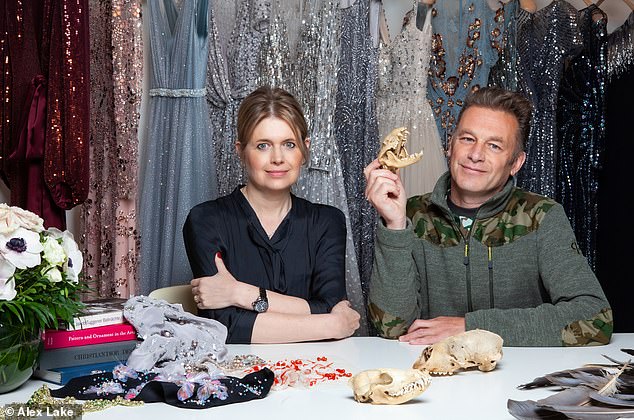 Jenny Packham who grew up in Southampton, reflected on childhood memories with her brother Chris (pictured) and the challenges facing her brand

The siblings grew up in Southampton, where their father was an engineer, their mother a housewife.

Chris’s nature obsessions dominated family life. ‘I used to dread being asked to clear out the freezer, because you’d be rummaging around and suddenly you’d put your hand on a bit of roadkill,’ Jenny recalls, sounding indulgent rather than indignant. ‘Or you’d come home from school and a snake would be slithering down the stairs.’

Jenny was in thrall to her big brother. Once she swallowed three tadpoles at his bidding; another time she allowed him to lock her in the car to memorise a book of birds’ eggs.

‘Chris is one of those people you just end up saying “yes” to, because he’s so charismatic. He’d be doing photography and I’d end up with a snake around my neck — but he’d have a way of making you feel safe.’

It was only in his 40s that Chris was diagnosed with Asperger’s syndrome, a form of autism which often manifests itself in single-mindedness and an inability to read social cues.

‘Growing up we’d never heard the word Asperger’s; everyone just thought he was very clever and a bit intense,’ Jenny says.

Chris lives in the New Forest, Jenny in London, but their bond hasn’t dimmed. ‘We really try to help each other as much as we can,’ Jenny says. 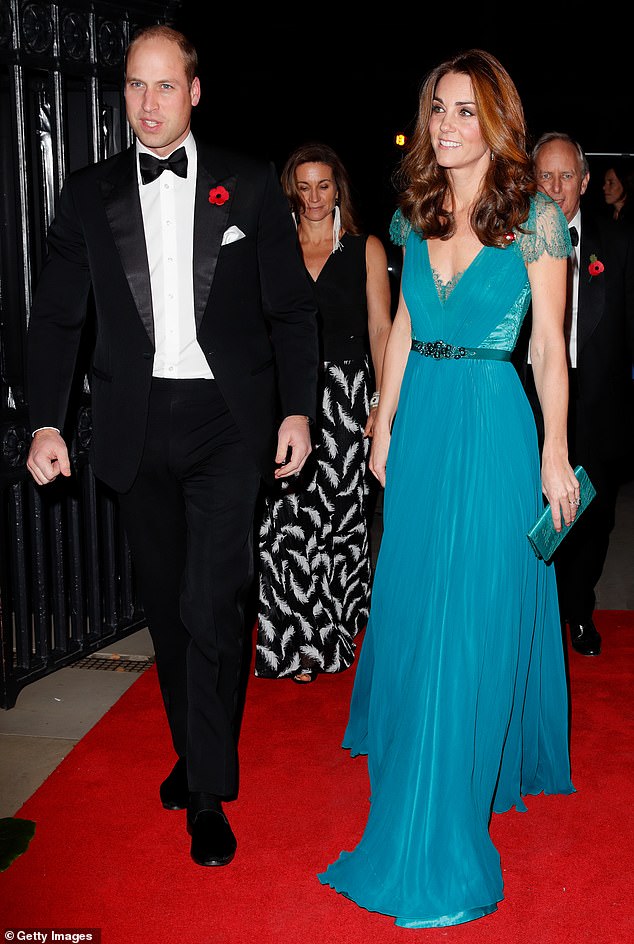 Jenny who has designed dresses worn by celebrities including the Duchess of Cambridge (pictured), revealed both of her parents encouraged creativity

She still gets pulled in to his crazier projects, as happened on a holiday they took in The Gambia about eight years ago. ‘There’s a wonderful picture Chris took of me next to the back of an alligator — which apparently is the most dangerous place you can sit,’ says Jenny, laughing. ‘He was like, “Just sit next to it!” ’

During lockdown, the siblings were in close contact. ‘He was on and on throughout: “You’ve got to come see my badgers,” so, last week, we went to the New Forest and had to lie quietly on the ground for an hour. Then 12 came out and it was just magical! That’s the thing about Chris — you get to do these moments with him.’

I wonder if Jenny started sewing (inherited from both grandmothers) as a way to develop her own passion.

‘Yes,’ she says softly. ‘And I always loved glamour.’ Her parents encouraged their children’s hobbies.

‘There was always a lot of enthusiasm about creativity from both my parents, I was making clothes and Chris is an amazing artist and photographer,’ she says.

‘To this day, I’ve always taken it for granted that being creative is a self-help method. If I’m stressed or worried I sit down and start drawing.’ 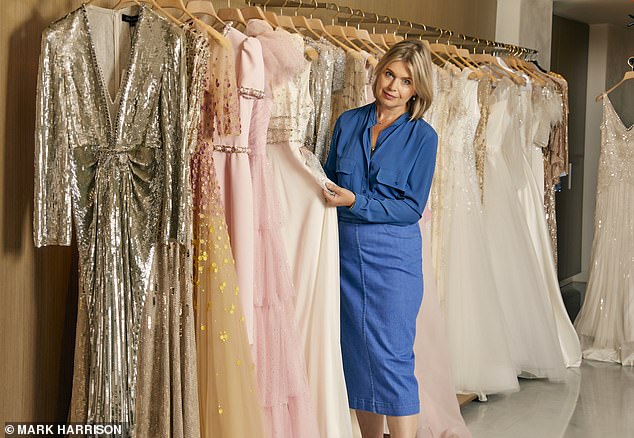 Now Jenny’s lending her voice — along with Victoria Beckham and Claudia Winkleman — to the national Let’s Craft appeal which, this summer, is donating crafting packs full of materials to the 1.3 million British children in need of free school meals, in the hope of inspiring them.

‘I think the boxes could be giving the kids a lifetime of creativity, which is essential to wellbeing.’

If you needed proof of how creativity can serve you well, then you need only look around Jenny’s eponymous shop where we’re sitting, in the heart of Mayfair, flanked by showrooms of some of fashion’s biggest names such as Balenciaga, Dior and Christian Louboutin.

The racks are laden with diaphanous frocks, studded with sequins and crystals. Downstairs are rows of dreamy bridal gowns.

But on a weekday morning, the glossy surrounding streets are eerily deserted and only one bride-to-be enters the shop during our chat to discuss some details.

After all, in the Covid-era, when weddings are limited to 30 socially distanced guests, there’s little call for dresses costing several thousand pounds.

‘In all our years, this is the biggest challenge we’ve faced,’ Jenny admits. In the 32 years since its launch, her label has weathered credit crunches and gulf wars. 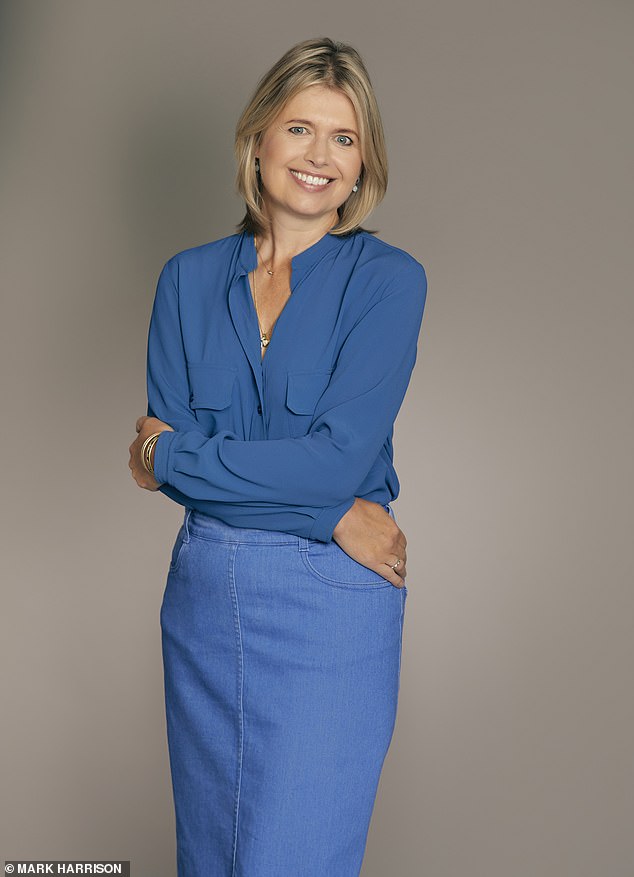 Jenny (pictured) who spent lockdown designing and redesigning her upcoming collections, has seen sales picking up in the Far East

‘Usually your thoughts immediately turn to what can you do to deal with it, how you can step up,’ says Jenny. ‘But, this time, you just had to be patient and that was a challenge for me.’

That’s not to say Jenny had a quiet lockdown. Instead, she filled her days designing, then redesigning her upcoming collections.

‘We’d design then think: “This doesn’t look right.” We took away some of the red-carpet pieces and added more casual stuff to the range. But for the whole fashion industry it’s very, very difficult at the moment.’

Still, sales are picking up in the Far East, with brides trickling back to her stores in Shanghai, Beijing and Seoul. ‘When it comes to wedding dresses, no one wants to buy online. It’s much better to go with your mum or your friend.’

The trickier thing is not being able to show seasonal collections to customers, especially department-store buyers who used to fly in from all over the world. For now, Jenny is modelling garments digitally, on avatars.

‘Already my feedback is buyers absolutely hate this,’ Jenny says. ‘It’s much better to see actual clothes than photographs.’ 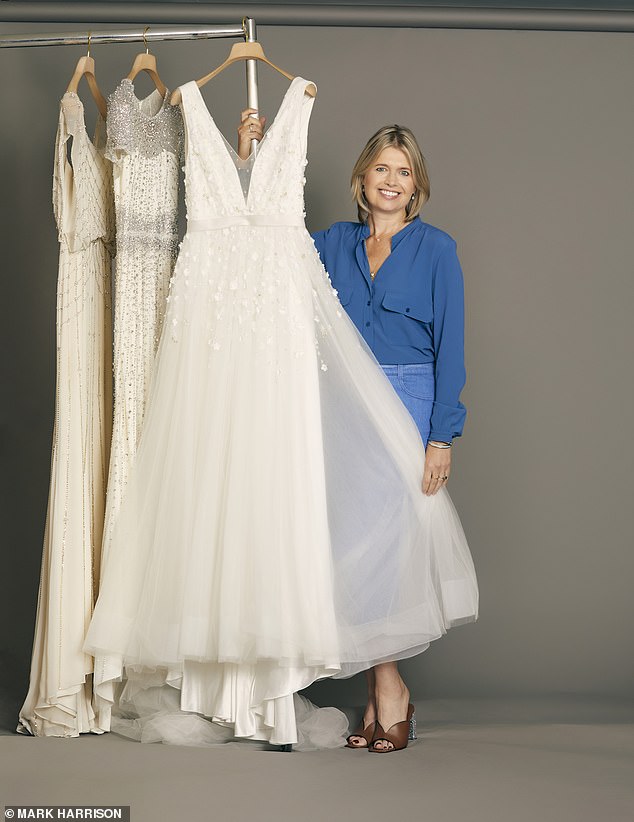 Jenny (pictured) said she stopped doing catwalk shows because ‘it all felt too crazy after a while’, now preferring to display her work to small groups

She’s still deciding whether she’ll show her clothes at Paris Fashion Week next month, having opened a showroom in the city 11 years ago.

She’s stopped doing actual catwalk shows — ‘it all felt too crazy after a while’ — preferring to display her work to small groups in her showroom. ‘I think some designers will be showing their collections, though they’ll probably just film their catwalk collections’.

‘I doubt a lot of people will be travelling but, if they are, we will make the effort to go — it makes all the difference — and we’ll show the collections here to as many people as we can. But it will be a strange time.’ After leaving St Martin’s College of Art in London, Jenny set up her label under a London flyover with her boyfriend Matthew, a sculpture student from Cambridgeshire, quite a feat for two poor young graduates from the provinces.

‘Looking back, I do admire myself because we didn’t even start off with cheaper garments. We went straight into the luxury market. In the end, it turned out to be good for us.

‘There weren’t too many people making things for special occasions then so, from early on, we were selling internationally in the U.S. and Middle-Eastern stores.

‘A lot of the customers from then we still sell to now.’ 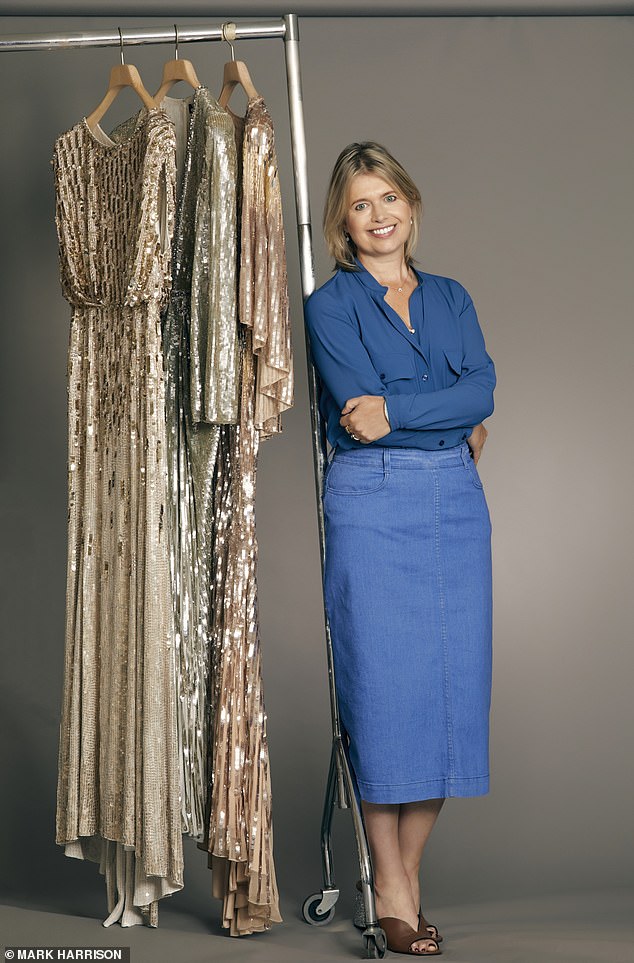 Pretty and soft-spoken, Jenny, who has two daughters aged 22 and 26, is the polar opposite of the stereotypical in-your-face fashionista.

Her calmness must come in handy, especially with hysterical A-listers who need a red-carpet outfit by yesterday.

Today, Jenny’s wearing a black jacket and trousers accessorised by a badge reading I Still Miss Elvis. At home, does she waft around in ball gowns? ‘Oh no, that’s absolutely not me! I very much design for other people, I don’t think about myself at all.’

After all, the bridal specialist only got round to marrying Matthew four years ago. Jenny wore a self-designed knee-length dress of grey, Austrian lace pulled together by a single seam.

‘I couldn’t have worn one of our long white dresses, I was too old for that.’ What took them so long to tie the knot? ‘We were just busy with the business and kids.

‘I thought it was really nice to get married later, so the guests were all people who had supported our relationship over the years.’ 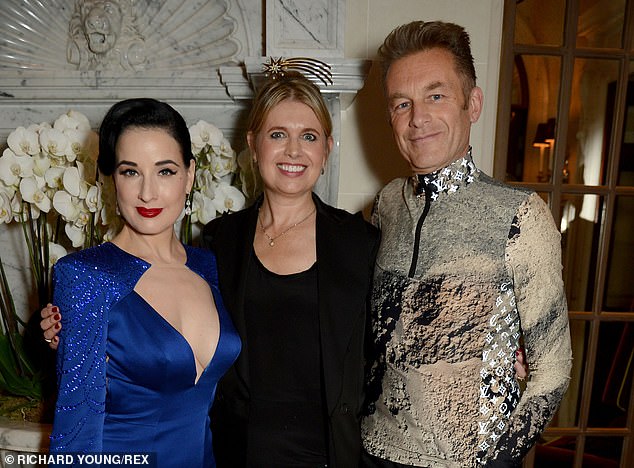 Jenny said it’s important ‘to lead the opposite of what people imagine fashion life to be, because otherwise the industry will destroy you’. Pictured: Dita Von Teese, Jenny Packham and Chris Packham

She eats well, exercises by walking her dog and does everything to minimise stress. ‘Fashion’s really hard work and you have to be really fit.

‘You have to lead the opposite of what people imagine fashion life to be, because otherwise the industry will destroy you.

‘It doesn’t bother me, I’m much more interested in the creative side of fashion than the party side.’

Everyone wants to know how Jenny’s coped for three decades working with her husband. ‘People are fascinated, but it’s our way of life and we have adapted.

‘Now I don’t understand people who don’t work with their husbands!’

Does she have any plans to work with brother Chris? A huge smile breaks over Jenny’s face. ‘I think he’ll stay away from ladies’ evening wear,’ she chuckles. I think she’s right.

To donate £10 to the Let’s Craft appeal, text CRAFT to 70085 or donate online at craftscouncil.org.uk