Seeing double? Kate and Meghan don near identical black midi dresses with heels as they join Prince William and Prince Harry for first joint appearance since 2020

Kate Middleton and Meghan Markle wore near identical black dresses as they made their first joint appearance together since March 2020.

The Prince and Princess of Wales, both 40, took to Windsor to inspect the sea of floral tributes laid outside the gates of the Berkshire estate in tribute to the late Queen, who died in Balmoral on Thursday, aged 96.

During the engagement, they were joined by the Duke of Sussex 37, and the Duchess of Sussex, 41, marking the first time that the two couples have all appeared in public since Commonwealth Day on March 9, 2020, just weeks before the Covid lockdown.

A Kensington Palace source said that the Prince of Wales invited the Sussexes to join him and the Princess of Wales earlier today.

And the two women opted for similar outfits for the appearance, both cutting stylish figures in black midi dresses, matching them with black tights, and minimal black pumps. 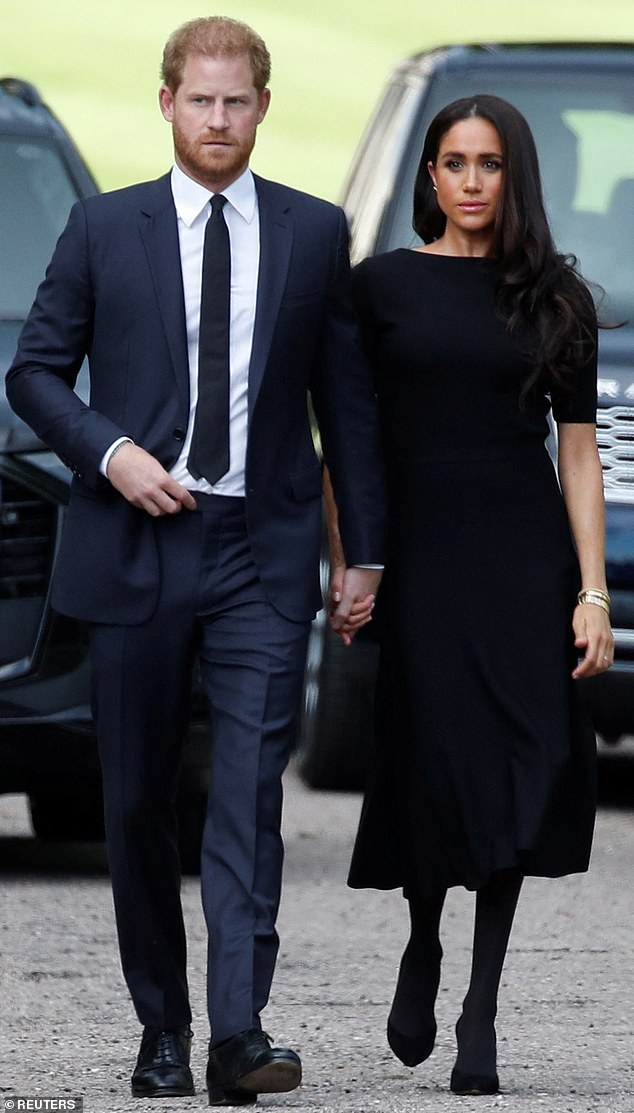 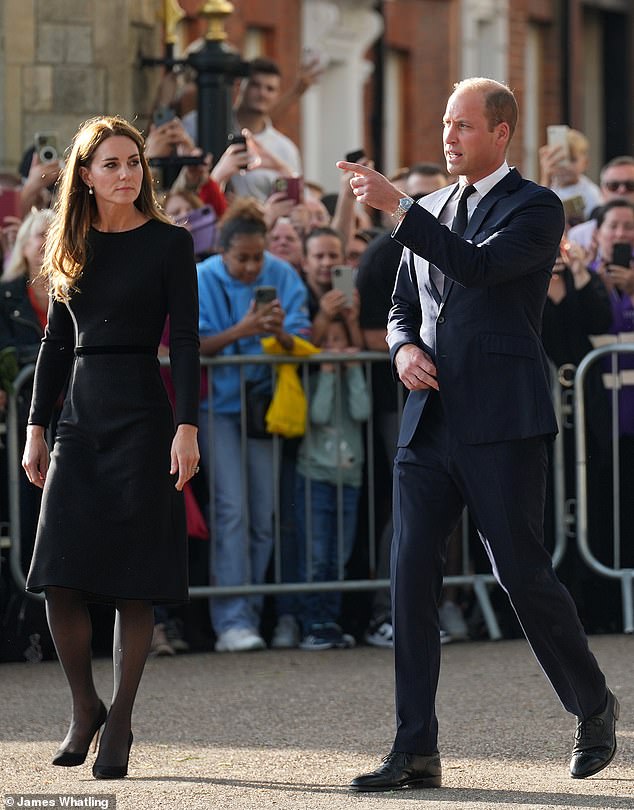 The Prince and Princess of Wales made their first public appearance together since the death of the Queen, and were joined by Harry and Meghan

While Kate opted for a long sleeved dress that ended just below the knee, Meghan chose a slightly longer cut, that fell slightly lower on her calves.

And while Kate’s dress had long sleeves, and a belt detail, Meghan opted for shorter sleeves.

Both of the Duchesses chose to pair their elegant frocks with classic black tights, and similar pointed black stiletto pumps.

And both finished their respective looks by styling their hair into loose curls, and choosing understated jewellery.

Matching looks: the Princess of Wales (left) and the Duchess of Sussex opted for similar looks for their engagement today, both donning black midi dresses and heeled pumps 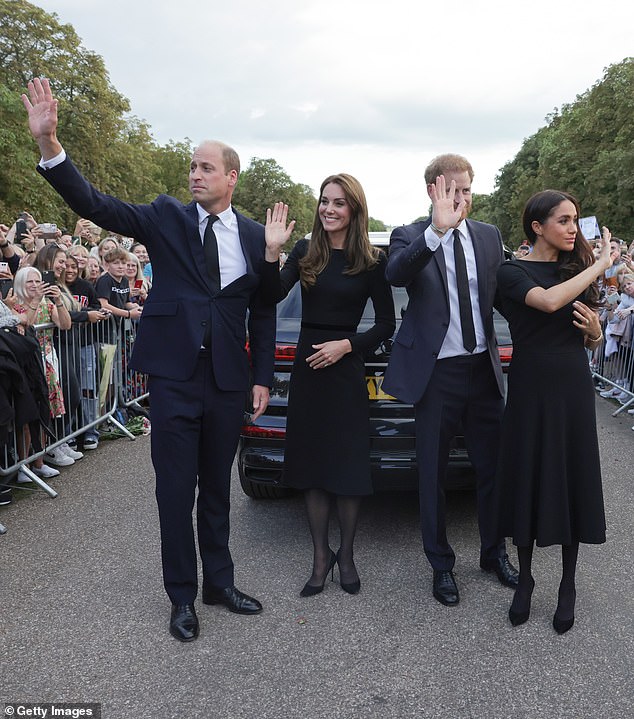 The two couples, once known as the ‘fab four’, wave to crowds after spending some 40 minutes meeting and greeting members of the public in Windsor

The Sussexes’ appearance at the walkabout came as a surprise to most people.

The engagement followed Prince William sharing a public statement regarding the death of his grandmother.

In the post, which he shared on Instagram, the royal wrote: ‘On Thursday, the world lost an extraordinary leader, whose commitment to the country, the Realms and the Commonwealth was absolute. So much will be said in the days ahead about the meaning of her historic reign.

‘I, however, have lost a grandmother. And while I will grieve her loss, I also feel incredibly grateful. I have had the benefit of The Queen’s wisdom and reassurance into my fifth decade. 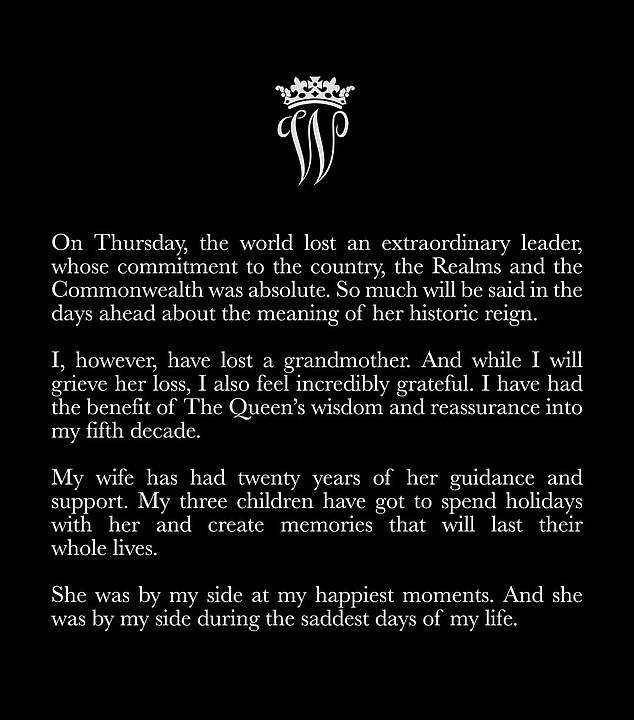 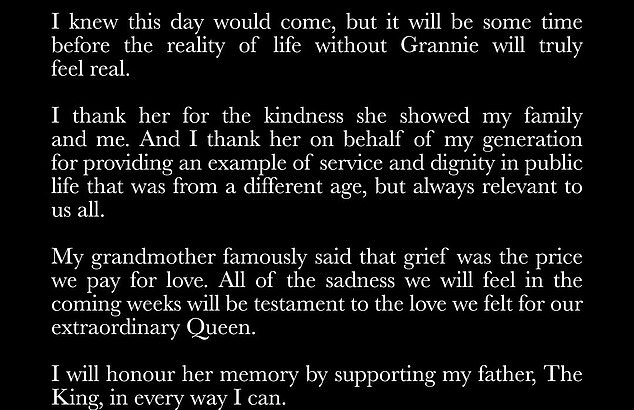 ‘My wife has had 20 years of her guidance and support. My three children have got to spend holidays with her and create memories that will last their whole lives.

‘She was by my side at my happiest moments. And she was by my side during the saddest days of my life. I knew this day would come, but it will be some time before the reality of life without Grannie will truly feel real.

‘I thank her for the kindness she showed my family and me. And I thank her on behalf of my generation for providing an example of service and dignity in public life that was from a different age, but always relevant to us all.

‘My grandmother famously said that grief was the price we pay for love. All of the sadness we will feel in the coming weeks will be testament to the love we felt for our extraordinary Queen.

‘I will honour her memory by supporting my father, The King, in every way I can.’