‘Just not OK’: Only 6 per cent of NDIS trial participants completed survey

A survey that included just 35 National Disability Insurance Scheme participants was used to justify the introduction of independent assessments, a move the federal Opposition and Greens have labelled a sham.

From mid 2021, independent assessments will be part of the process in which people are accepted into the scheme. By the end of the year, it will be used to review those already part of the scheme. 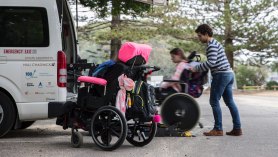 From mid-2021, independent assessments will be used to determine people’s eligibility for the NDIS.Credit:Louie Douvis

The three-hour appointments will be used "determine the significance of a person's disability", the scheme's website says, and help the agency make "fair and consistent decisions" about who is eligible for funding through the scheme.

The national roll-out follows trials of the process run by National Disability Insurance Agency. The second pilot program is still under way, but the first was completed in November 2019. It included more than 510 people as well as a survey of their experience of their assessment appointments.

The agency reported 91 per cent of participants or their representatives in the first trial reported "high levels of satisfaction with their appointment".

Under questioning from Greens disability spokesman Jordon Steele-John in October's Senate estimates, the Department of Social Services defended the survey's response rate saying 145 responses from participants or their representatives was a "statistically significant sample".

Labor's NDIS spokesman Bill Shorten said the small number of survey participants showed the decision to use independent assessments was based on "tokenistic consultation with the very people who will be affected by the change".

"The rushed Liberal plan to make 400,000 Australians audition before a panel of strangers to get on or stay on the NDIS has already angered people with disability," he said. "And now the proposed system of 'independent assessments' has been revealed as only having sham consultation."

Senator Steele-John said the situation was "just not OK".

"Compulsory independent assessment is a solution that is being forced on disabled people against our will," he said.

The decision to introduce independent assessments was initially recommended by the Productivity Commission in 2011, and later in the NDIS Act Review of 2019.

One of the reasons for introducing the assessments was participants reported struggles with bearing the costs of getting their own assessments completed.

Minister for the NDIS and Government Services Stuart Robert said the government was "on track" to delivering major improvements to the scheme, making it more responsive and fairer for participants and their carers.

"Independent assessments are a fair and consistent way of ensuring new and existing participants receive more flexibility and greater choice and control over the reasonable and necessary supports provided through the scheme," he said.

"It is estimated independent assessments will save people with disability and their families collectively up to $170 million per year in out of pocket expenses."