Prime Minister Scott Morrison and his Japanese counterpart Fumio Kishida will hold a virtual summit on Thursday to ink the defence pact, which will lead to more maritime war games, military aviation exercises and the stationing of troops in each other’s countries. 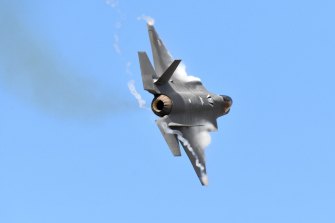 The F-35Joint Strike Fighter could be involved in more aviation exercises between Australia and Japan.Credit:Joe Armao

The long-awaited Reciprocal Access Agreement, which has been negotiated since 2014, will ensure militaries from both countries will more easily be able to visit each other’s countries and conduct joint exercises.

The finalisation of the deal comes after Australia and Japan have grown increasingly concerned about escalating tensions in the region, including China’s growing militarisation of the South China Sea and its butting up against Tokyo in the East China Sea.

It is the first agreement of its kind Japan has struck with another country, and the most significant since the 1960 Status of Forces Agreement with the United States.

Mr Kishida was due to travel to Australia to sign the final version of the agreement, but was forced to cancel the trip to deal with a worsening COVID-19 outbreak in Japan.

Mr Morrison said the “historic” agreement will mark the “opening of a new chapter of defence and security cooperation between our two countries”.

“This landmark treaty will underpin greater and more complex practical engagement between the Australian Defence Force and the Japanese Self-Defence Forces,” he said.

“It will, for the first time, provide a clear framework for enhanced interoperability and cooperation between our two forces.

“This treaty will be a statement of our two nations’ commitment to work together in meeting the shared strategic security challenges we face and to contribute to a secure and stable Indo-Pacific.”

The agreement is expected to lead to more aviation exercises between the two countries, including air-to-air refuelling operations involving jet fighters such as the F-35 Joint Strike Fighter.

John Blaxland, professor of international security and intelligence studies at the Australian National University, said it was an “obvious evolution of a deepening security relationship that has been building for more than 20 years”.

“It’s fair to say this is historic, it is something that two decades ago would have probably seemed inconceivable,” he said.

Professor Blaxland said the growing unease about the US’s resolve to remain engaged in the region amid the rise of China, and the desire of Australia and Japan to “collaborate with each other in coaxing America to stay engaged”, has brought the two countries closer together.

“There will probably be some people on the margins who will criticise the agreement,” he said. “But overwhelmingly, across the political spectrum, there is a sense that in light of the surge of ‘wolf warrior’ diplomacy and sharp power exercised from China, combined with the growing closeness and obvious overlap of interests between Australia and Japan, that this is a natural progression.”

Mr Morrison and Mr Kishida are also expected to discuss growing instability across the Taiwan Strait, as well as the need to strengthen global bodies such as the World Trade Organisation.

They will also discuss initiatives to boost cooperation on cyber security, quantum and artificial intelligence, as well as shoring up supply chains in areas such as hydrogen.

Later this month the world’s first shipment of liquid hydrogen will be sent to Kobe, Japan, made from brown coal out of Victoria’s Latrobe Valley.