Late-night hosts in California have been forced back to broadcasting from their homes as a result of new restrictions on filming in Los Angeles due to spikes in cases of the coronavirus.

The state is among one of the hardest hit in the country, prompting the actors union SAG-AFTRA and other Hollywood producers to call for productions to be suspended indefinitely until more hospital beds can open up to treat the influx of patients.

“Patients are dying in ambulances waiting for treatment because hospital emergency rooms are overwhelmed. This is not a safe environment for in-person production right now,” Gabrielle Carteris, the president of SAG-AFTRA, said in a joint statement Sunday (via Reuters).

James Corden was among the first to announce that he was taking his show back to his garage after returning to his studio in September.

“No, you're not experiencing déjà vu. With Los Angeles back on lockdown, we're once again taping the #LateLateShow in @JKCorden's garage until it's safe to return to our studio,” a tweet posted on the show's account Monday reads. “So mask up, stay safe, and we'll see you tonight.”

In his first monologue back from the holiday break, Cordon addressed the situation with his band.

“That’s right, we’re back in lockdown. For a few days we’re going to be doing the show from my house until it’s safe to return,” he said. “The first time we were here was in the spring so, once again I’m saying hello to my garage and goodbye to my pants.”

He joked: “Last time we were in the garage we were… do you remember when everyone was making sourdough bread? Back when everyone… had energy…”

Jimmy Kimmel also shared a photo of himself on Twitter announcing that he’s back to recording from his home.

“This is our first show of the new year, an exciting new year; 2021 is in, 2020 is out. I’ve been bubbling with enthusiasm, optimism. I’ve been ready for a return to normalcy and here I am doing the show from my kitchen again because there’s a deadly virus that seems to be living in L.A. now,” he said in his opening monologue Monday. “It seems to have taken permanent residence here. I believe it lives across the street from me in Kendall Jenner’s old house.” 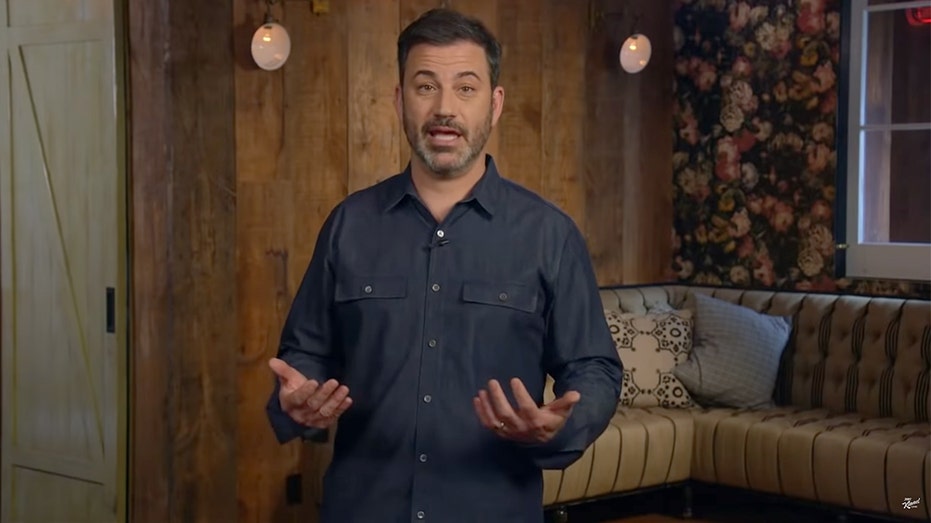 Jimmy Kimmel was forced to return to broadcasting from his home amid spikes in the coronavirus in California. (ABC)

The host continued to comment on the surge of the coronavirus in California, blaming Donald Trump’s mishandling of the pandemic for the current state of things in the country.

“Things are bad here in southern California. Hospitals are full, ambulances are driving around in circles trying to find open beds for their patients, frontline workers are dying and our president does not care at all.”