When Jane Harper was invited to visit the set during filming of her first novel, The Dry, she took full advantage. The director, Robert Connolly, was on location in outback north-west Victoria and needed extras for a scene being shot in a small church. Harper didn't need to be asked twice, showing up with about a dozen friends and family ready to play grieving townspeople.

"The church is peppered with various acquaintances, which was very funny. But it was also rather surreal; it was like a real funeral sitting in there," Harper said. "There was a sad montage of photos and they gave you a fold-out order of service. It was all hushed and respectful." 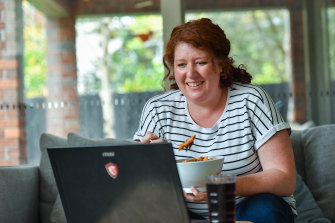 Jane Harper says having worked for years as a journalist helped when she turned to fiction.Credit:Joe Armao

The film is in the can and was due for release in August but, as with so much that has been delayed thanks to coronavirus, it won't be in cinemas until April.

Harper did see it at a screening for investors and other important people in February. She was impressed. "I'm so happy because I feel like there are so many times you've read a book and see the film and it's not as you imagine it, doesn't really capture it. When it's your own book, that fear is heightened tenfold."

What particularly delighted her was that the tone was "pitch perfect" and Eric Bana great as her federal investigator Aaron Falk. "I really liked how it was so true to the book without being a slavish reproduction. Robert Connolly has taken the important essential elements of it and turned it into a fantastic film in its own right." 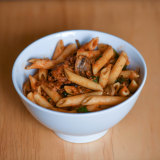 Fortunately, our lunch hasn't been delayed, but in lockdown Melbourne it is different. We did meet face to face, but not at a table sharing a nice meal. I saw her across the threshold of her home when I played delivery boy for our encounter.

She had chosen the St Kilda stalwart Topolinos, reliable purveyor of pizza and other Italian dishes, as the source for our lunch. As we happen to live within a few minutes walk of each other, I volunteered to pick up her penne del bosco (mushrooms, sun-dried tomatoes, eggplant, baby spinach and napoli sauce) and diet Coca-Cola and my risotto selvagio (porcini and wild mushrooms, with pinenuts and sage).

We had a bit of a chuckle as I hovered – masked and awkward – at an appropriate distance from her front door, clutching the brown paper bag containing her lunch. Then I scurried home so we could continue our encounter via the helping hand of the Google empire.

The thing that strikes you about Harper is how down-to-earth and unaffected she seems by her success. This is, remember, the writer whose first novel, The Dry, has sold more than 1 million copies, whose next two books have sold a total of 1.5 million, and who is credited with creating the quintessentially Australian "outback noir" genre that has delighted so many readers of crime fiction around the world. 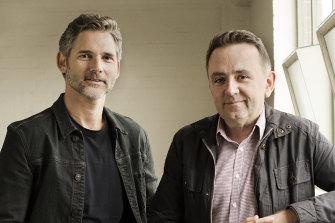 Eric Bana (left) and Robert Connolly, star and director respectively of The Dry, which was adapted from Harper’s bestselling novel.Credit:

The Dry changed her life "completely, unrecognisably". Until a few years ago, she had been a journalist, first in Britain on papers in Darlington and Hull. During the GFC, when there were no jobs to be had on Fleet Street, she returned to Australia – she had spent six years here between the ages of eight and 14, living in Boronia – and worked for The Geelong Advertiser and, most recently, The Herald Sun.

"I wasn't married, didn't have children, working that full-time journalist thing doing long hours. And then you fast forward five years later, I've got two children, married and on my fourth book and I get to set my own working day, I get to write what I want to. It's amazing. It's honestly been an absolute dream, really fantastic."

That fourth novel, The Survivors, has just come out and has already topped the bestseller charts. Its main character is Kieran, who has returned at the end of summer to the small coastal town in Tasmania where he grew up to help his mother pack up the family home and shift his father, who is suffering from dementia, to a care home in Hobart. 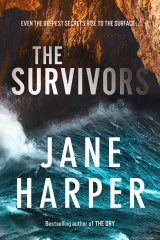 Kieran is guilt-ridden, having been blamed for the drownings 12 years earlier of his elder brother and one of his brother's friends during a massive storm. That same night, a girl went missing and, on the night Kieran returns, another girl is found dead. Secrets, like flotsam, float to the surface.

I read the book as a novel about guilt, grief and parenting – which it is – but Harper says those aspects emerged only as she was writing.

She is known for her feel for place in her fiction – just ask anyone who has read The Dry, which has an almost visceral sense of the heat and aridity of its setting. This time, Tasmania, she says, ticked all the boxes for a coastal setting. She went there in February for research – to talk to fishermen and townsfolk and, somewhat reluctantly, to scuba dive. Had she left it a few more weeks, it would have been impossible to visit.

There she had an early encounter with the impact of coronavirus. One of the things that kept coming up in her chats was the ripple effect of the virus-dampened Chinese new year celebrations. 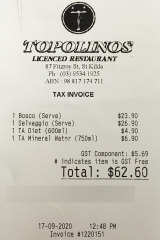 "The exports that they relied on quite heavily had taken a real hit," she says. "Back then, it hadn't quite reached our shores, but the hit on the Asian market had directly affected these Tasmanian fishermen. They were saying, 'It's going to cost X million dollars', and I remember thinking, 'Isn't it incredible how in this global economy this virus that we see only happening in China is directly impacting these lives in a small Tasmanian town?' Then sure enough, within weeks … "

She has always been a reader and thanks her parents for not making a fuss about it when she was a child. "It was never a big deal, never forced or encouraged, it was just always there. I could see that was the way they relaxed, a genuine hobby, and I absorbed that, which I'm really grateful for."

Perhaps that's why she always had a secret ambition to write a book. She studied English and history at the University of Kent at Canterbury, and has now increased its list of former students turned novelists – Kazuo Ishiguro, Sarah Waters, David Mitchell and E.L. James.

Going into journalism was a way to write professionally.

"It's helped me a lot, the discipline, the ability to express yourself on the page. It has given me skills that I still use every day when I'm writing a novel."

But her success as a writer has affected the way she reads for enjoyment. On the one hand when a book isn't working for her she wonders why not and what it would take to fix. On the other, when a book is completely working she is wondering why and how the author has done it.

"I'm always trying to lift the bonnet and see the working parts."

There's a slight irony that the most influential Australian crime writers of recent years, Harper and the late Peter Temple, were both immigrants: Temple from South Africa and Harper from Britain.

To be fair, though, Harper did have her time here as a child. They were formative years – she became a citizen then and now considers herself completely Australian – and going back to England was like going back to a foreign country.

"I sort of had to learn how to be English again. Then, when I moved back here when I was 28, I think I had these quite intense, fully formed memories and it was quite interesting to see how accurate they were or otherwise.

"I was interested to revisit places I had gone to as a child and see how different they were. I think I was really aware of the differences and I think that has always helped me in terms of being able to tap into things that are uniquely Australian and make it something that the reader can latch onto."

I wondered at what stage she thought her son and daughter, both still very young, might read her books. After all, they have been dedicatees. "I sometimes think of that. It's hard to know what age. I'll probably take the approach my parents took: just have the books there and let them pick one up as they become interested."

The Survivors is published by Macmillan.

Get our Morning & Evening Edition newsletters