In Milan, a Design Pop-Up Celebrates Color and Creativity 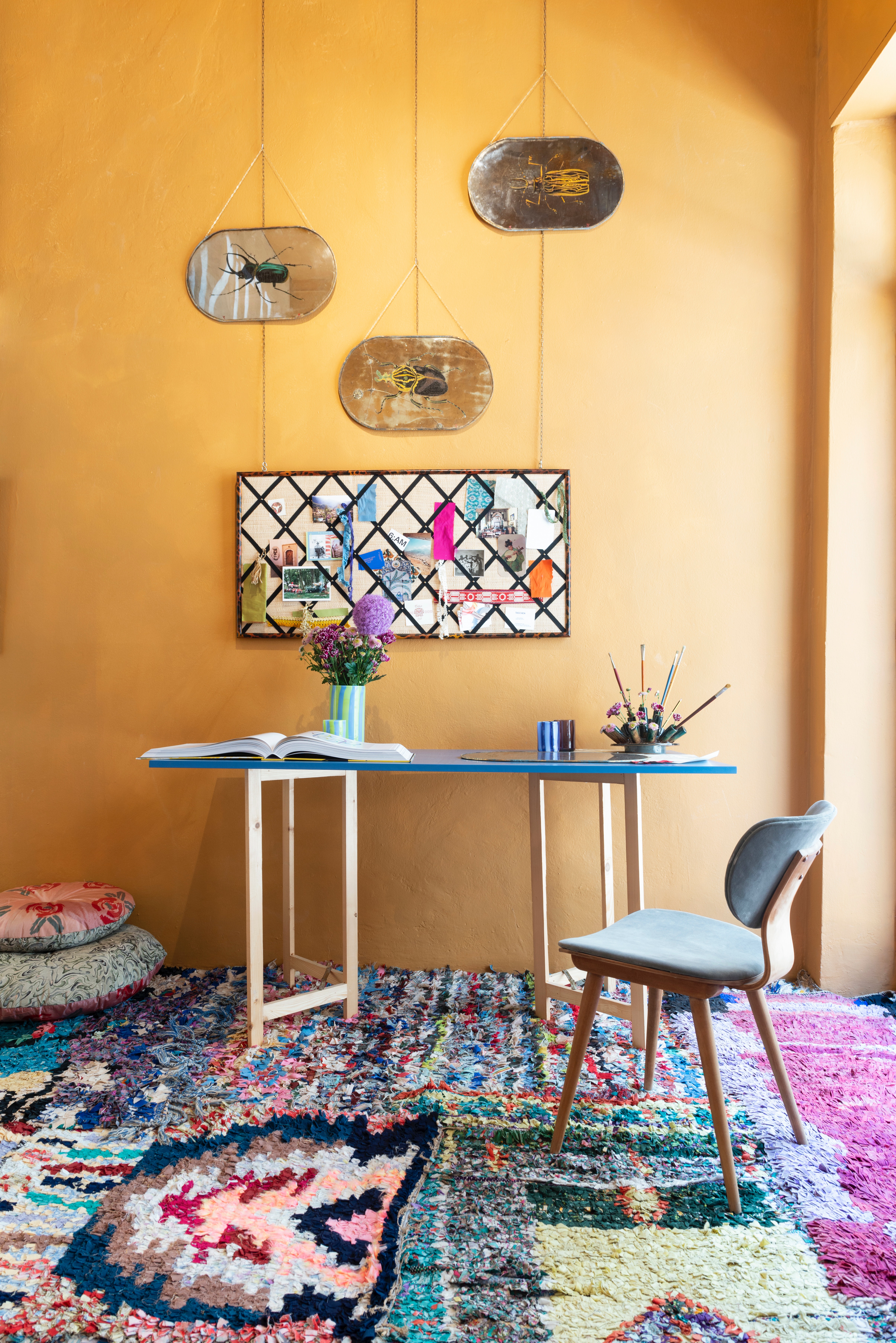 In a grey building on a grey street during a grey day in Milan, a riot of color radiates from a plate glass window. Even through the grainy reception of a WhatsApp video call, the glow from the room within feels friendly and powerful: On top of a patchwork of vintage Moroccan rugs, a hot pink velvet armchair stands at attention; in the back, a bed is crowned with two gigantic pillows shaped like open hands; scattered on a modernist desk are candy-striped Venetian glasses and art books. Suspended over everything is a swath of craft paper painted with the phrase “RESTI STASERA?” which translates to “Are you going to stay the night?” If you didn’t know any better, you might think you were peeking into some chic, creative person’s bedroom while they were out for the afternoon.

“It’s fun that it’s on the street,” says Claudia d’Oncieu, a co-founder of the fledgling design firm Paraná Studio, who is giving me a virtual tour of the domestic tableau. “When I go to the south of Italy, in Napoli or Puglia or Palermo, I love that there are apartments that are on the ground floor and you can see what’s happening inside. Maybe you have an old lady cooking or playing cards. Here, it could be exactly the same thing, no?”

A vintage print is mounted on a hand-painted frame by Paolo del Gallo. In lieu of a headboard, the designers commissioned a custom pair of hand-shaped pillows by Charlap Hyman & Herrero.

In reality, the inviting space is a shoppable exhibition, dubbed Get Together, which showcases Paraná’s unique approach to interior decoration and curation. Founded during the doldrums of Italy’s first lockdown last spring by d’Oncieu, 28, Marita Guglielmi, 28, and Clementina Calleri, 29, Paraná was inspired by long days trapped inside, when the importance of having a home that makes you happy became more apparent than ever.

After fielding dozens of requests from friends who suddenly wanted help zhuzhing up their small spaces, the Rome-based trio first focused their approach on making the most of the “first apartment,” that transitional place to sleep and keep your clothes that often gets furnished with disposable items from Ikea. Over the past year, they have pivoted to a motto of “tasty homes and spicy pieces,” no matter the size, with an emphasis on supporting Italian artisans, sourcing vintage furniture and decor, and building design concepts around the pieces their clients already have and love.

A Suzani from the 1960s hangs behind a pink velvet armchair from the ‘50s sourced by Gloria Pasquali.

In the Milan space, which is located inside a gallery owned by Alberto Levi, a rug collector and dealer, those tenets are expressed through a mix of pieces made and sourced by the many creatives in their orbit. The hand-shaped pillows are stitched from antique kimono fabric by the architecture firm Charlap Hyman & Herrero (which sells a smaller version on their own website, but this supersized set was custom-ordered). Adorning the walls are vintage prints mounted on intricately hand-painted frames by Paolo del Gallo—which are works of art on their own—and pill-shaped mirrors painted with insect illustrations by the Rome-based artisan Kami Zekiyan. An appliqué lamp, an original Paraná design with Jones Bamboo, is trimmed with the unexpectedly chic combination of blonde raffia and black grosgrain ribbon, which matches the memory board over the desk. The glasses, with alternating stripes in colors selected by d’Oncieu, Calleri, and Guglielmi, are by 6:AM Glassworks, an artisan collective in Murano.

The Get Together pop-up, which is open by appointment through July 30th, is Paraná’s second gathering; their first was hosted last year at del Gallo’s apartment in Rome. “The one in Rome was sort of an experiment—we were trying to test ourselves,” d’Oncieu says, reflecting on the evolution of their work. “Rome was a fun mix of young minds,” Calleri adds. “This is the first time we’ve really shown what we’re able to do.” Currently, they have multiple projects in progress in Milan, Rome, and Maremma, a coastal part of Tuscany.

Paraná’s first “Get Together” in Rome was staged at del Gallo’s apartment and featured a different mix of artisans. Photographed by Nicoló Carlon.

The co-founders describe their style as eclectic, inventive, and young, with an aesthetic rooted in the bright, warm colors and rich textures of Rome—and global travel. “If you enter one of our houses, you can feel where we’ve worked, where we’ve lived,” says Calleri, who has jumped between Italy, Mexico, Kenya, New York, and London in her lifetime. But their mission is also deeply practical, with an emphasis on solving design problems with sustainable, well-made pieces that won’t be discarded after a few years.

“Our research is always about finding unique pieces,” says d’Oncieu. “Maybe you have a lamp, but you’re missing a bedside table, maybe we’ll find you a very normal piece of furniture, but we’ll make it strange and beautiful, or have something customized by one of our artisans. It’s about filling your space with something that you will love forever, and not leave behind.”

Another scene from the Rome pop-up last spring. Photographed by Nicoló Carlon.

On the right, one of the first iterations of Paraná’s applique lamps, featuring hand painted details by del Gallo. Photographed by Nicoló Carlon.

While you can’t move into this particular street-facing space, they’re hoping it will invite you into their world. It’s a proof of concept as well as a celebration of the next generation of Italian creativity and style. Maybe you’ll walk away with a set of cups; or you might rethink your whole approach to color, texture, and space with their guidance. Either way, Get Together is an opportunity to enjoy the pleasures of a space that looks and feels like nowhere else.