Igloo-shaped home in Surrey goes under offer for £1million

An igloo-shaped four-bedroom house with a swimming pool that looks like the perfect Teletubby retreat has gone under offer for £1million after four years on the market.

Decagonal The Dome house in the leafy village of Tatsfield, Surrey, also boasts triangular windows in the roof that allow sunlight to stream through the home, underfloor heating and a pool bar.

Owned by artist Debbie Riehl, it was built by award-winning architects David Richmond Associates in 1986, earning them critical-acclaim across the design world.

Glamorous photos show the circular-looking property set in the middle of a half-acre green lawn behind the swimming pool and decking area. 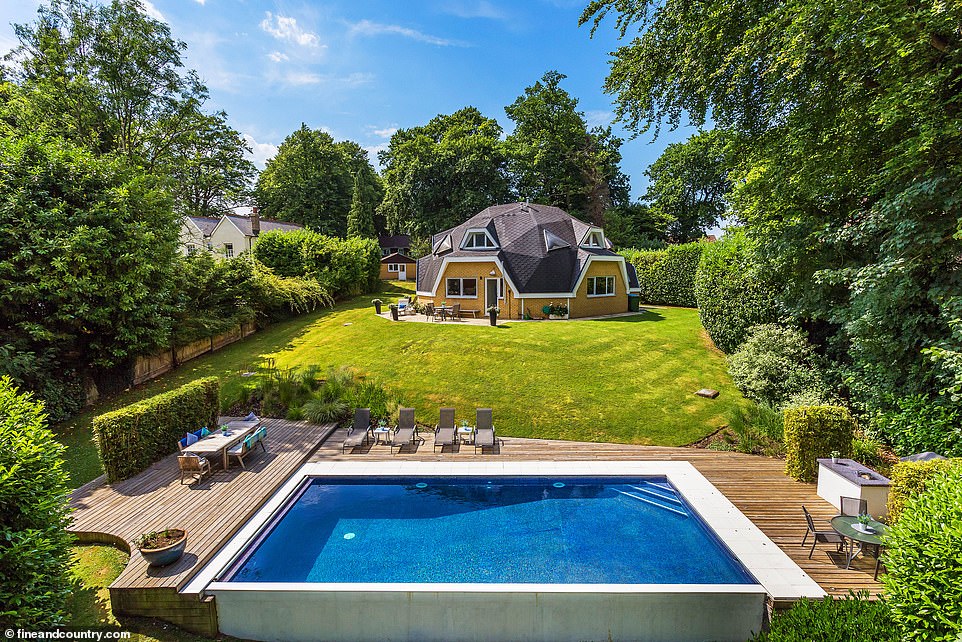 Igloo-shaped The Dome house in Tatsfield, Surrey, has gone under offer for £1million after four years on the market. The house boasts a heated swimming pool with pool bar, seen on the right, underfloor heating and triangular windows 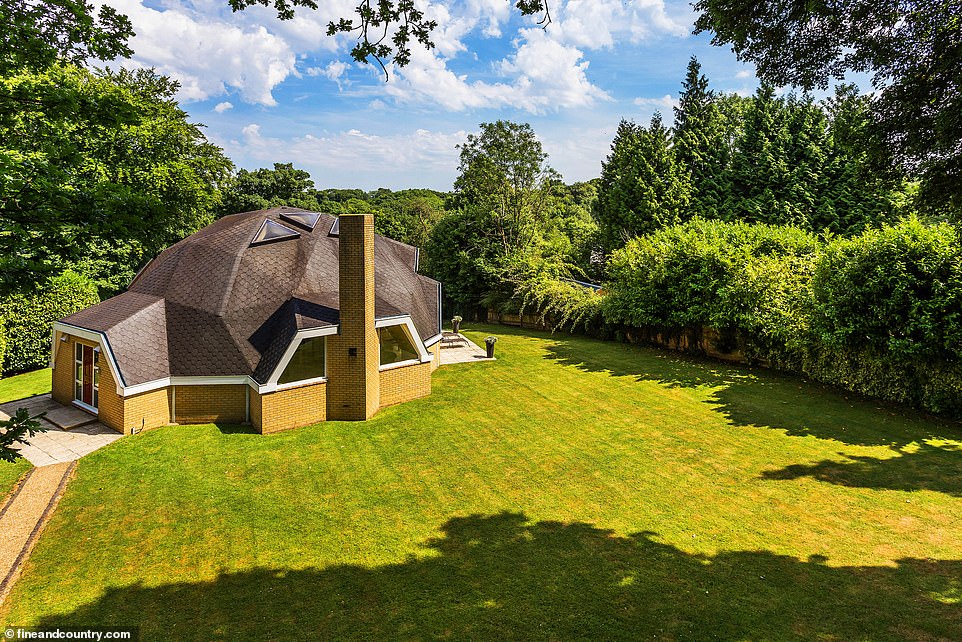 The 1986 home also holds four bedrooms and a bathroom. It was built that year by award-winning architects David Richmond Associates 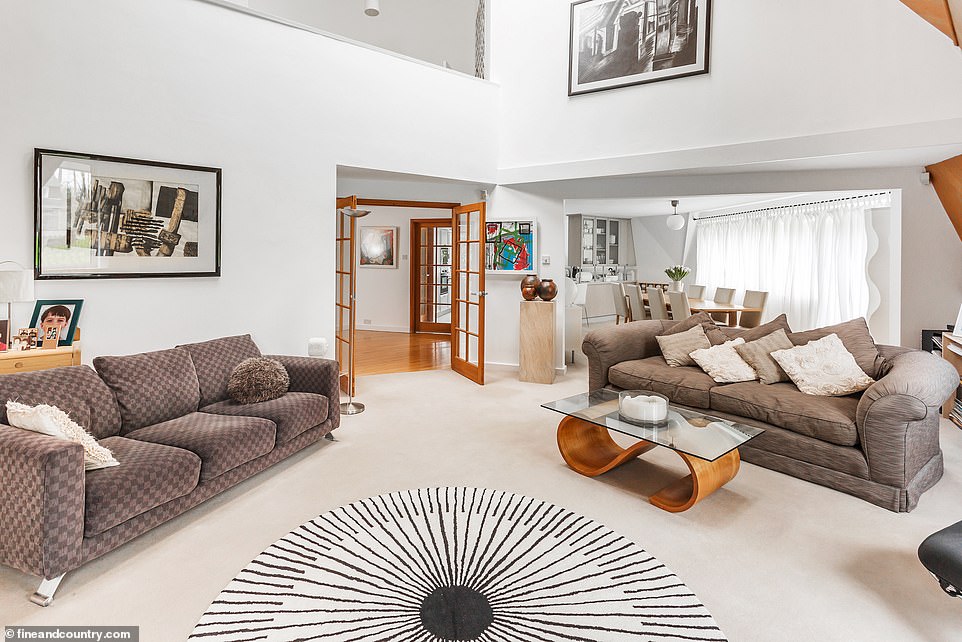 Glamorous photos from the inside of the home show a clean white-washed interior with no wall between the kitchen, dining room and sitting room 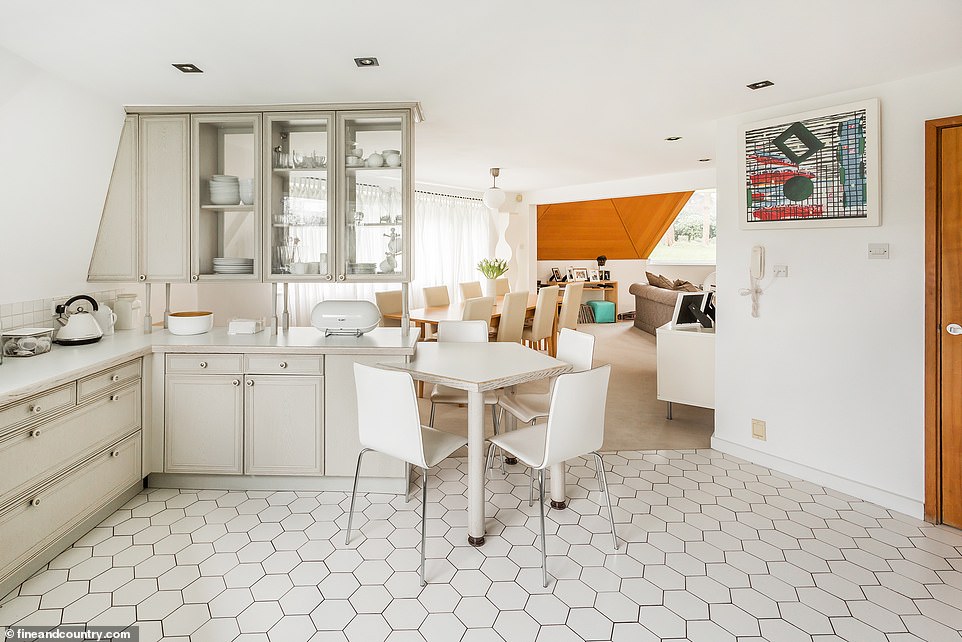 The house is less than 10 minutes from Biggin Hill airport and a further 15 minutes from a station in London’s Zone Six. It also has underfloor heating and can be lit with natural light thanks to the triangular windows in the roof

Pictures from the inside show an open-plan living space with the kitchen, dining room and sitting room all connected.

The sitting room ceiling is panelled with wood for the part facing the outside and then white-washed across the remaining area. A snap from the bedroom, taken in 2016, shows the sloping walls and triangular windows.

The home is accessed through secure double gates up a driveway, and comes with a double-garage that has been converted into a studio.

It is nestled in Tatsfield, about a 15 minute drive from London’s Zone Six, and less than 10 minutes away from Biggin Hill airport. 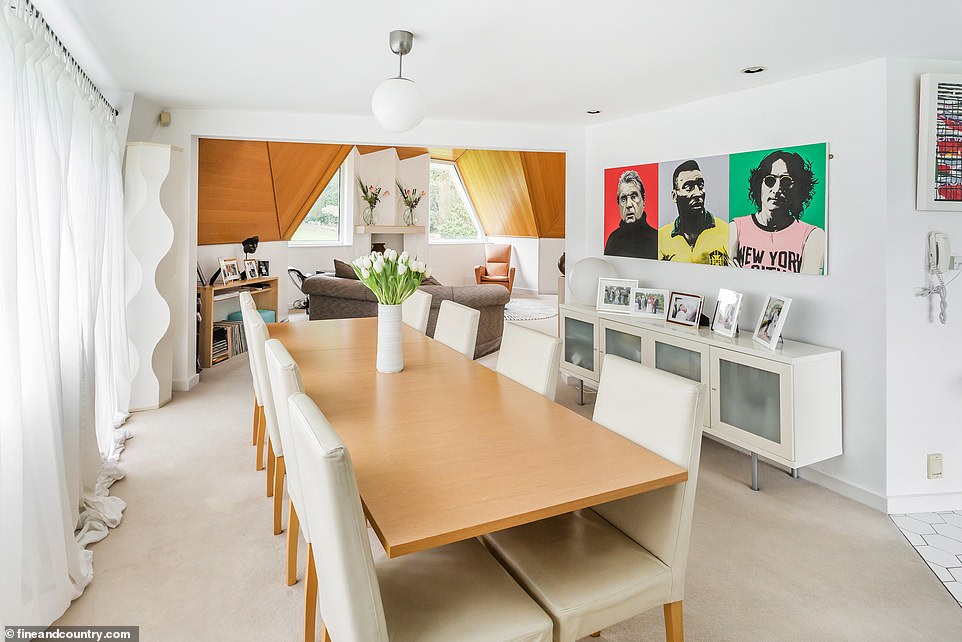 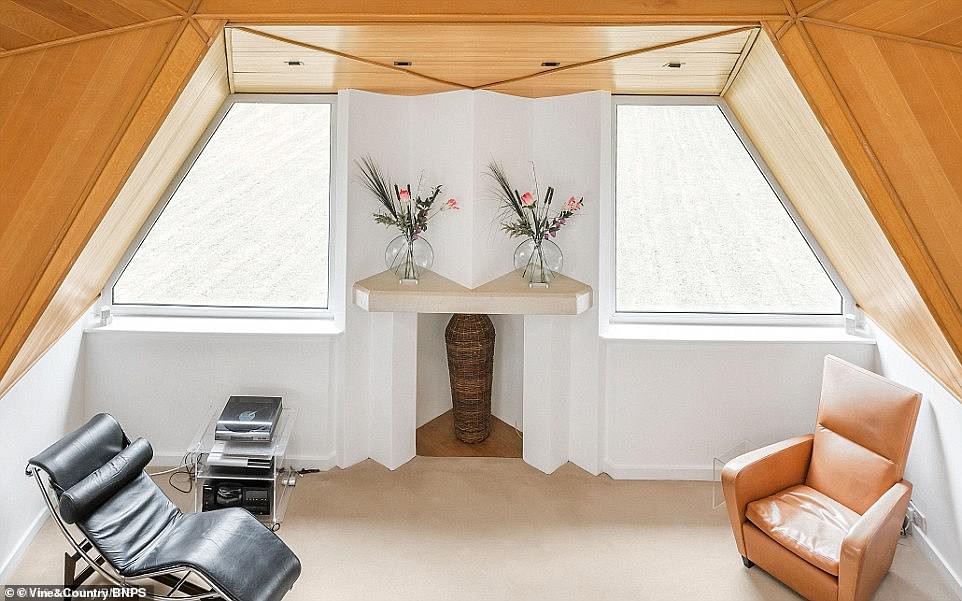 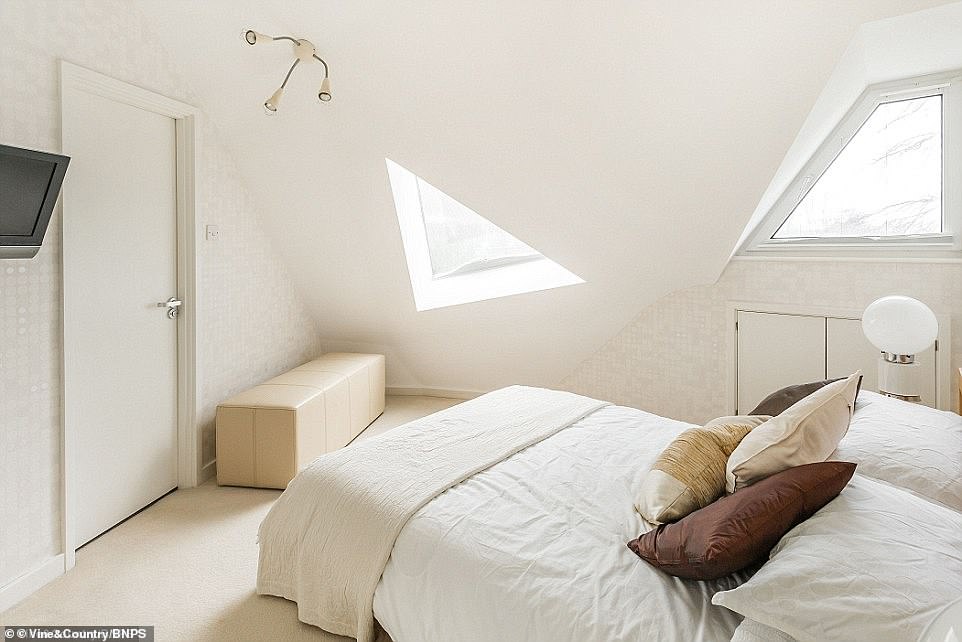 This image shows one of the property’s four bedrooms, highlighting the unique sloping walls and triangular windows. It was taken in 2016 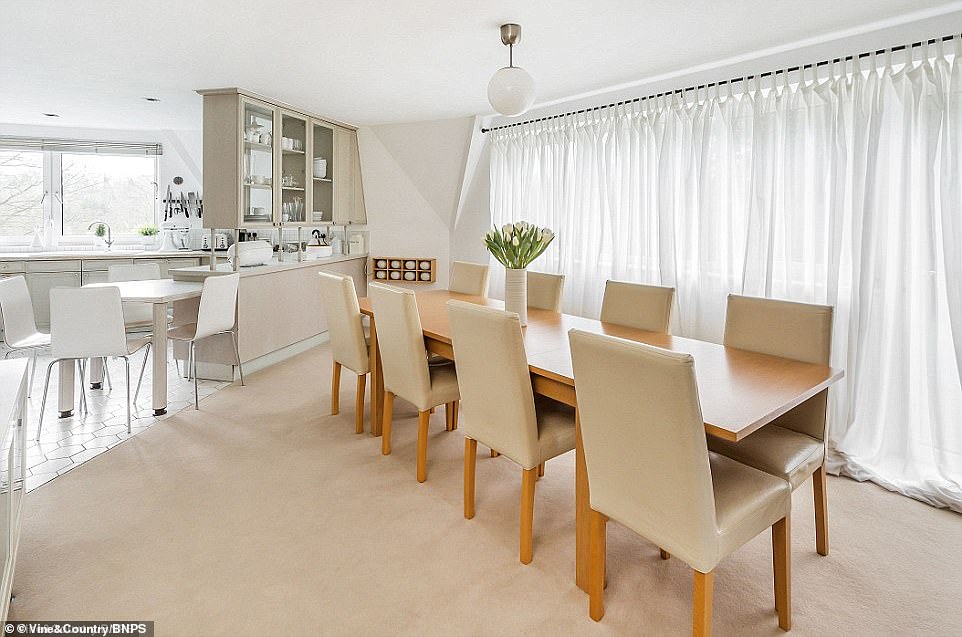 Pictured here are the kitchen and dining room in 2016. The chairs have since been recovered although the tulips remained in place along with the table and chairs in the kitchen 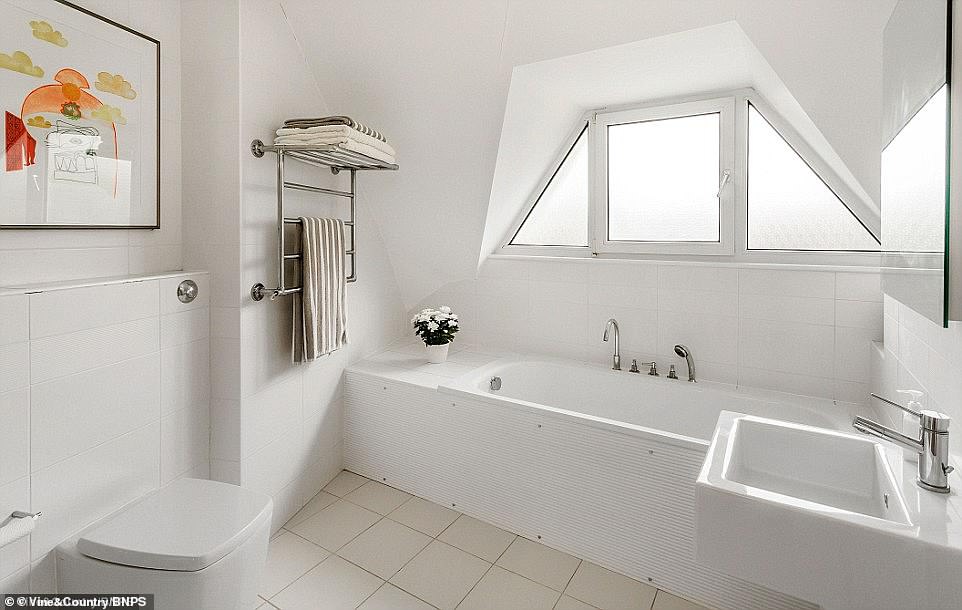 This is the bathroom pictured in 2016. There is a bath with a showerhead alongside a toilet, a towel drying rack and square sink 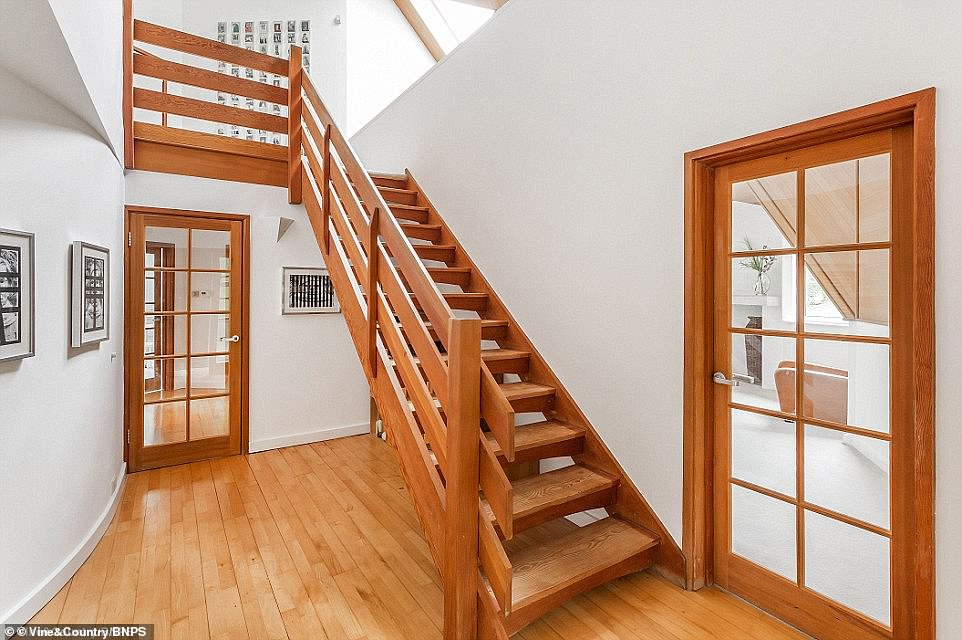 This is the wooden staircase inside the property, that was pictured in 2016. Two glass-panelled doors are also shown 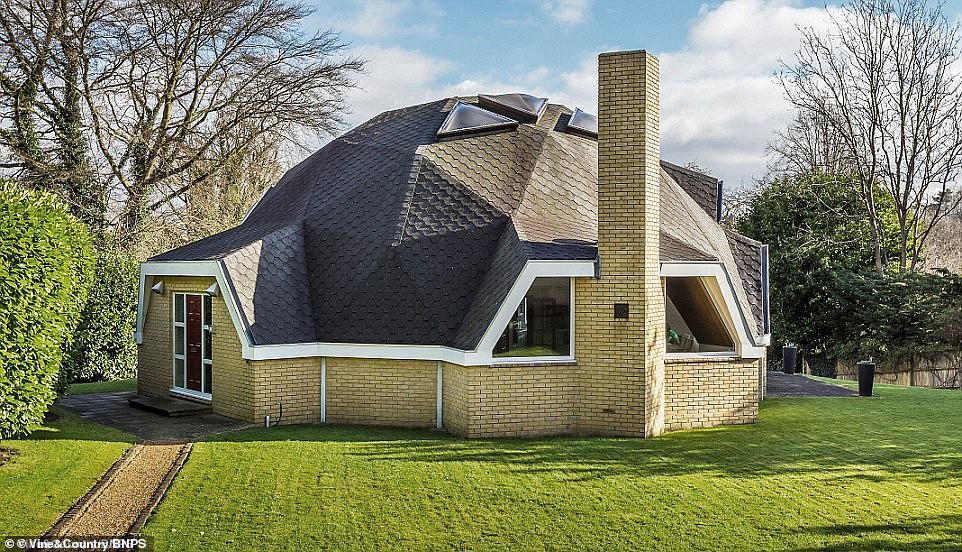 The outside of the house in 2016. Parts of the roof appear to have been constructed using a pentagonal shaped tile system 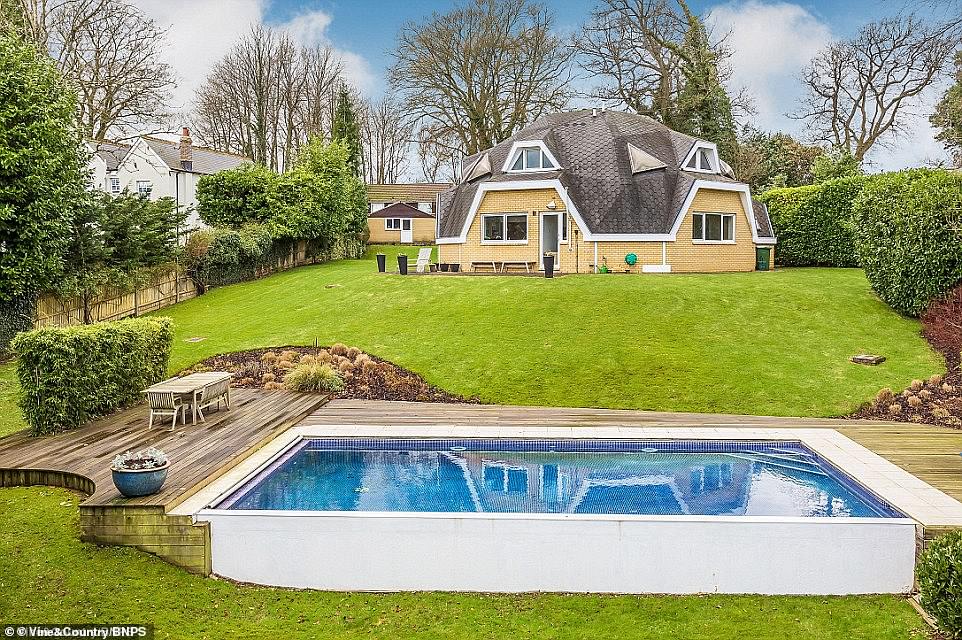 Owner Debbie Riehl said: ‘I love the aesthetic dimensions of the room from all angles; it’s very pleasing to the soul and as an artist this is very important to me.’ Pictured: the rear of the property and the pool 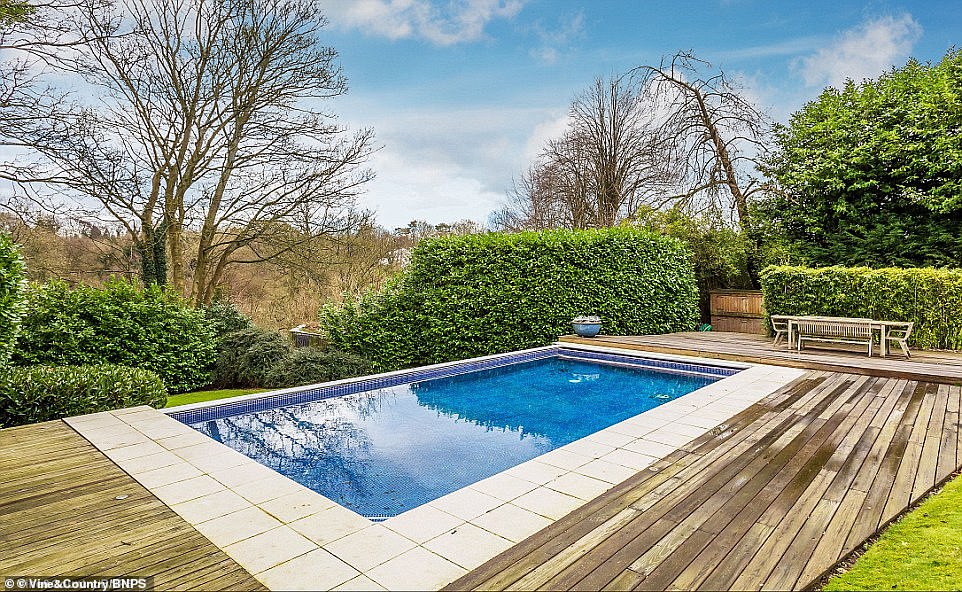 The swimming pool, pictured in 2016 with a table and chairs. To the left of this image is the stunning pool bar, while an entertaining area sits opposite

Owner Debbie Riehl said: ‘I love the aesthetic dimensions of the room from all angles; it’s very pleasing to the soul and as an artist this is very important to me.

‘Throughout the 29 years of living in The Dome the natural beauty of the house, and in particular the living room, never fails to make me smile.’

Bob Barber, from the estate agents Fine & Country, said: ‘When you enter The Dome, its design instantly impresses, with the unique and open plan interior giving a great sense of light and space.

‘It’s got this great geodesic design which is quite unusual – I’ve never seen a house like it before. Tatsfield is a quintessential English village, it’s very popular and in an area of outstanding natural beauty.

‘The other properties in the village are very traditional, mostly 1930s-built detached and semi-detached properties.

‘There’s nothing else like this. We would expect it to attract a London buyer, a young professional or couple who would like something so unconventional.’