Huang Xiangmo, billionaire, alleged agent of foreign influence and subject of a $140 million tax judgment, took his fight against a court order freezing that value of his assets to the High Court on Wednesday.

Mr Huang, known as Changran Huang in court documents, was not in the almost empty Canberra courtroom for the hearing. He has not been in the country since leaving for China in late 2018, shortly before his residency visa was cancelled in part on character grounds. 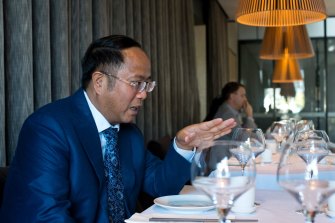 Huang Xiangmo became a well-connected political donor during his time in Australia.Credit:Ryan Stuart

The next year the NSW Independent Commission Against Corruption heard allegations Mr Huang had dropped off an Aldi bag with $100,000 in cash to the state Labor party’s headquarters in 2015. Mr Huang has denied those claims along with the foreign influence allegations, which are not related to his tax affairs.

On Wednesday lead barrister, Bret Walker, SC, told five justices of the country’s highest court via videolink that an order from the Federal Court in 2019 freezing Mr Huang’s overseas assets to cover his debt was not made properly.

Amid a thicket of highly technical legal argument, Mr Walker emphasised the court had to balance sharply different interests in making freezing orders: the tax office seeking to pursue a debt, the court seeking to protect its processes and Mr Huang’s right to deal freely with his own property.

From the outset, he said there was nothing inherently suspicious about someone moving assets in and out of the country, as Mr Huang did to the tune of tens of millions of dollars when he resided in Australia, according to the tax office’s documents in the case.

Money coming from overseas to develop businesses and create wealth was “really the history of this country since settlement”, Mr Walker said, who has an enviable record of success before the High Court representing figures including Cardinal George Pell.

“It would be a bizarre proposition that there was something a priori suspicious about someone moving assets from Australia when it is that person who has brought the assets to Australia.”

Part of the legal argument is whether the freezing orders have any chance of being effective in China.

Federal Solicitor-General Stephen Donaghue, QC, and a colleague representing the ATO argued if barriers to freezing orders were raised too high as a matter of legal principle, it would prevent them being made in time, giving time for people being sued to evade justice by dissipating their assets.

“A worldwide freezing order serves a purpose even in the absence of the established availability of a specific enforcement mechanism in each relevant foreign jurisdiction: the order prevents a judgment debtor from diminishing assets that could (and should) otherwise be used to satisfy the judgment,” Mr Donaghue said in a written argument put to the court.

Mr Huang has said the decision to cancel his visa was wrong, suggested the tax claim against him was an act of political persecution and denied foreign influence claims. “It is profoundly disappointing to be treated in such a grotesquely unfair manner,” he said in 2019.

“The decision of visa cancellation was made based on unfounded speculations that are prejudiced and groundless.”