‘Thank you, daddy!’ Technology expert reveals how to make Siri say ANYTHING when you plug in your charger – and programs a very cheeky phrase into his own iPhone

A tech expert has revealed a clever trick to make Siri recite a funny phrase whenever a charger is plugged into the iPhone.

Kaan, a popular TikTok star, has earned 4.4 million followers for videos in which he shares little-known iPhone tricks.

In one, he breaks down step-by-step how to program your phone to utter any word or phrase when a charger is plugged in — and programs his own to say ‘Thank you, daddy.’ 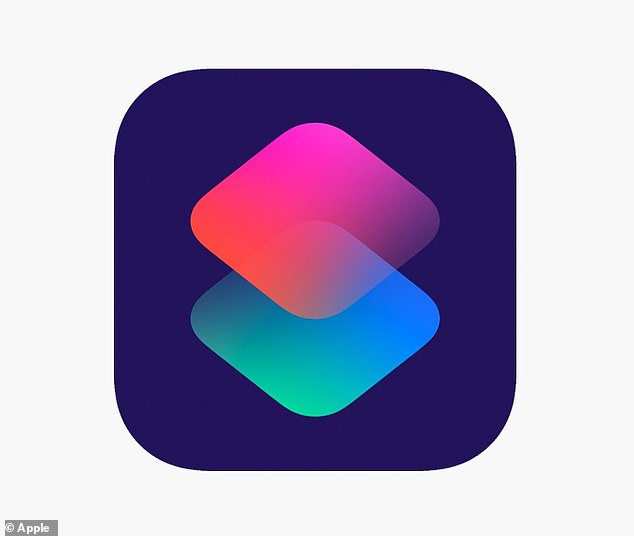 Trick time! Kaan, a popular TikTok star, has revealed a clever trick to make Siri recite a funny phrase whenever a charger is plugged into the iPhone — starting with the Shortcuts app 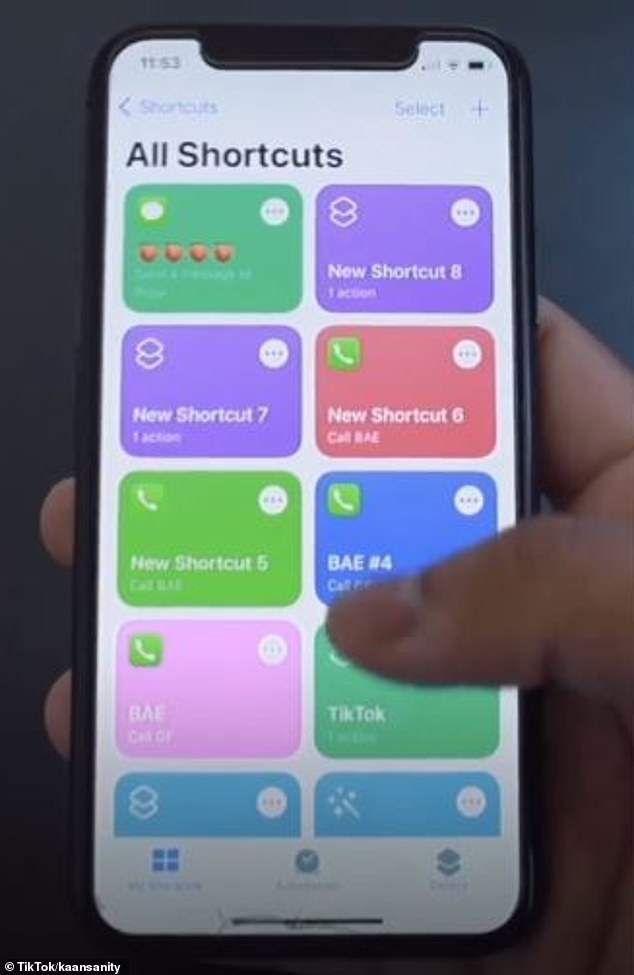 How to: Like many of his tricks, this one starts with the Shortcuts app, which allows users to design their own shortcuts and sequences on their phone 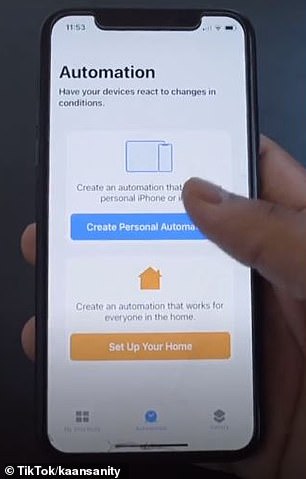 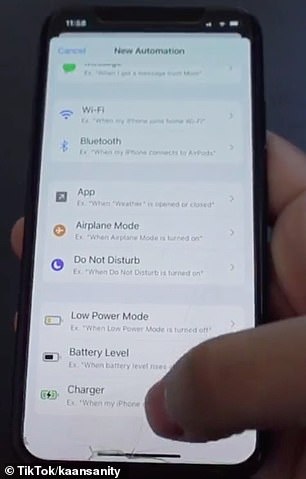 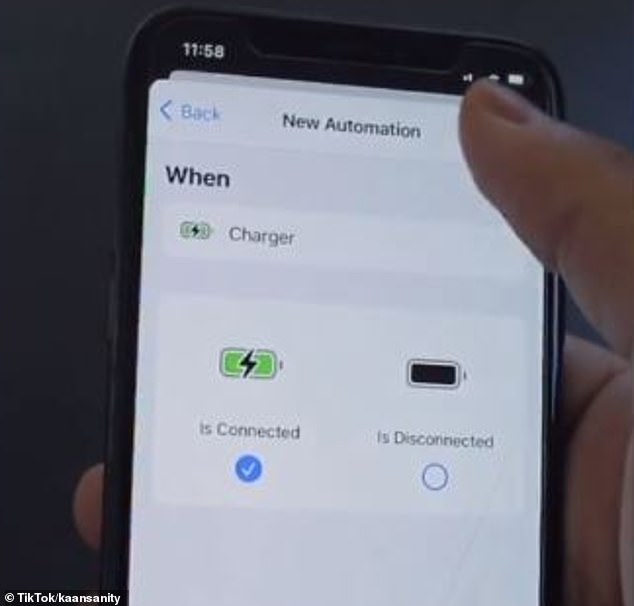 Preference: Then click Next, with ‘is connected’ selected on the screen

‘Here’s another iPhone trick I guarantee you didn’t know about,’ he says.

Like many of his tricks, this one starts with the Shortcuts app, which allows users to design their own shortcuts and sequences on their phone.

At the bottom of the screen, click the Automation button, then select Create Personal Automation.

Kaam says to select Charger, which is at the bottom of the list, and then Next, with ‘is connected’ selected.

Next, click Add Action followed by Speak Text. If Speak Text doesn’t show up as an option on your screen, you can search for it in the search bar.

Here is the fun part: In the space provided, type any words you want — this will be what Siri says whenever a charger is plugged in.

Finally, hit next and deselect Ask Before Running before clicking Done.

This is where Kaan demonstrates the naughty message he has programmed Siri to say whenever the charger is plugged in.

Those who’ve tried it out have shared their funny success stories in the comments, including several who’ve come up with even naughtier phrases for Siri to say.

Others have gone more PG, including one whose made theirs say ‘yessssss feeeeed meeeeee.’

‘Now every time I plug my phone in it says “pigeon meatball stir fry” and I get terrified every time,’ wrote another. 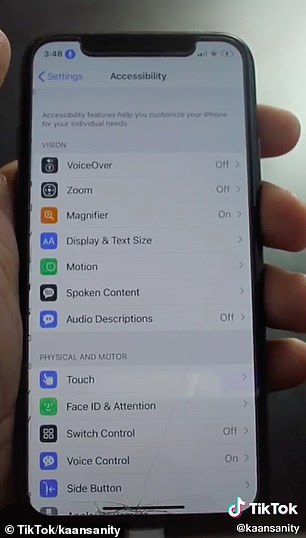 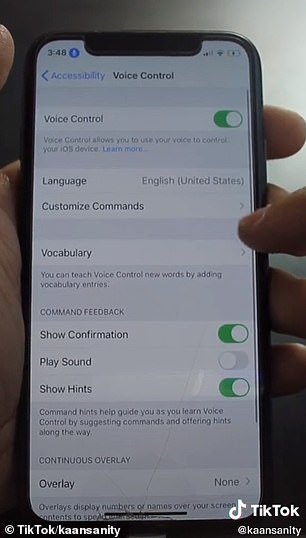 How to: In July, he shared a trick for unlocking a phone without using Face ID or entering a passcode – relying on voice control instead

Last year, as many iPhone users struggled with Face ID because of face masks, Kaan showed how to unlock an iPhone without it — or even a passcode.

‘I’m gonna show you how to unlock your phone with your voice,’ he says in the viral video, which he uploaded on June 27, 2020.

First, he instructed viewers to go to Settings and select Accessibility, which is in the third block of options below General, Control Center, and Display & Brightness.

Then select Voice Control (under the ‘Physical and Motor’ subsection).

For the trick to work, Voice Control — the first option at the top of the screen — needs to be enabled. This allows users to use their voice to control their iOS device, without even saying ‘Hey Siri.’ 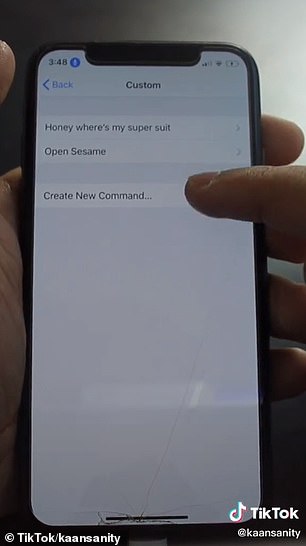 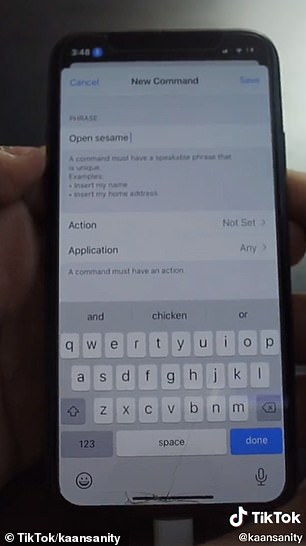 Step by step: After selecting Customize Commands, they name the verbal command 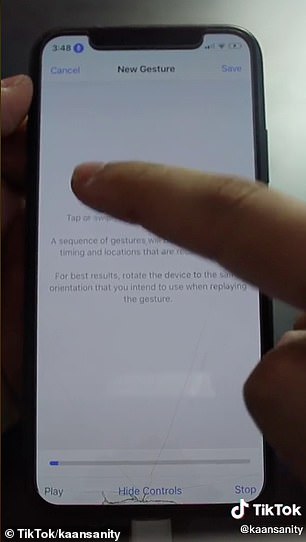 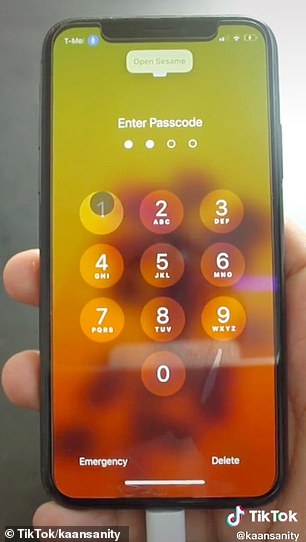 The reward: They then record an action — in this case, typing in a PIN code on the keypad. When users than say their voice command , the action plays out on screen

Once that has been enabled, click on Customize Commands to create a new voice command.

‘From here, click Create New Command and type in whatever phrase you want to use to unlock your phone,’ @kaansanity saod, using ‘open sesame’ as his own example.

‘Then click “Run Custom Gesture” and type in the place your passcode would be,’ he added.

This means that when you give the voice command of your choice — whether it be ‘open sesame’ like @kaansanity’ or even ‘lemme see my phone’ — your iPhone will behave as if you are tapping out your PIN number and unlock your phone.