How the tiger mum's cubs came to her rescue

How the tiger mum’s cubs came to her rescue: Infamous for her book about her ruthless parenting, everyone expected Amy Chua’s daughters to grow up hating her. But ten years on, her girls are her biggest supporters as she fights for her professional life

Ten years have passed since Amy Chua penned a best-seller about her ruthless parenting methods. Battle Hymn Of The Tiger Mother was meant to be a comical memoir about her efforts to turn her two daughters into high achievers, but many read it as a child-rearing manual.

Among the hardline techniques Chua espoused were banning television, computer games and sleepovers and threatening to burn beloved soft toys. The 2011 book sparked a firestorm of debate and saw critics label Chua the cruellest mother in the world.

A decade on, though, it’s clear that the 58-year-old law professor has had the last laugh when it comes to raising her children. Sophia, 28, and Lulu, 25 — she tells me from her home in New Haven, Connecticut — are both brilliant lawyers, one of whom is due to marry her fiance this autumn. 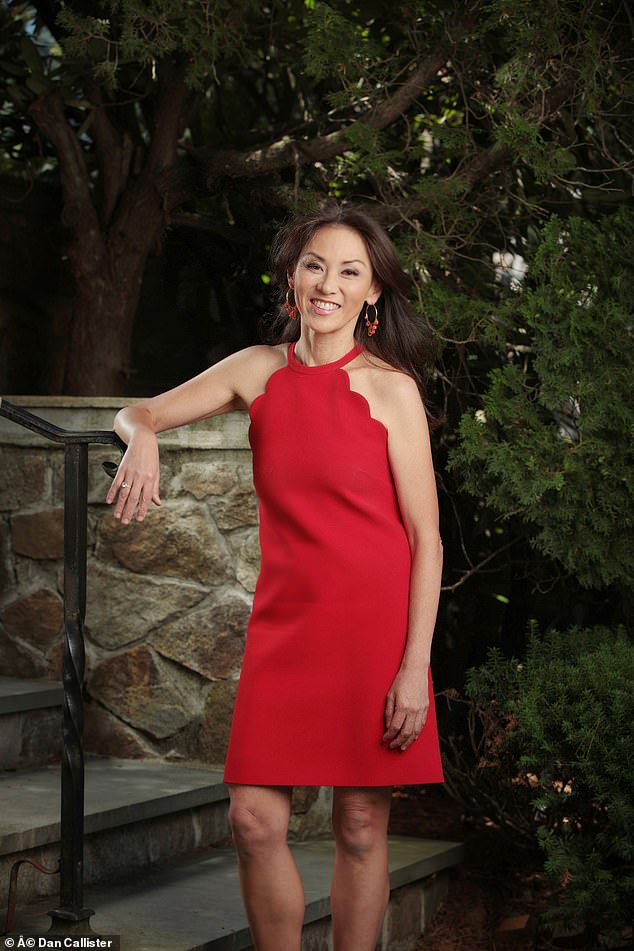 Life may have turned out grand for her cubs, but things haven’t been going quite so smoothly for Chua — and her husband, fellow law professor and novelist Jed Rubenfeld. Once the most powerful couple at Yale Law School, the pair — married for more than 30 years — are both fighting for their professional reputations.

Rubenfeld is accused of sexually harassing female students, which he firmly denies, and is suspended from teaching. Chua is battling ‘untrue, outrageous’ claims she hosted boozy dinner parties for students in lockdown.

‘The claims are ludicrous,’ she tells me. ‘There were no drunken parties. A couple of students reached out to me, very upset, wanting advice. They took lateral flow tests before coming to the house and sat ten feet apart with the windows open. They stayed no more than an hour and a half.’

More, later, of what Chua is alleged to have done, not to mention her denials. For it goes without saying that the woman who spawned the term Tiger Mother won’t go down without a fight. And, fighting tooth and claw alongside her are the tiger cubs she raised so ruthlessly. If ever Chua needed validation of her parenting methods, it is here. 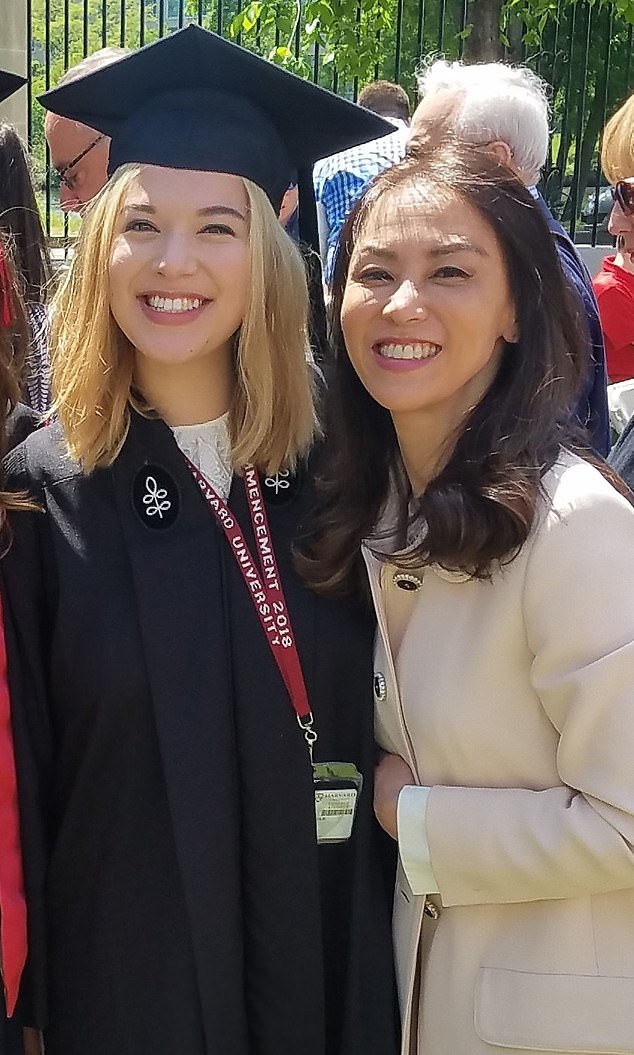 Degrees of success: Amy with daughter Lulu on her graduation day

With ‘Dinner Party-gate’ sending the media into meltdown, it was Lulu, in her final year at Harvard Law School, who told her mother to roar back at her accusers.

‘Lulu said to me: ‘You can’t stand for this. You have the truth on your side’,’ says Chua. ‘She explained that in her generation, everyone believes what they read on social media and me being the famous Tiger Mom meant that everyone was tweeting about ‘Tiger Mom hosting boozy dinners’. I decided to fight back.’

While Chua wrote a sternly-worded letter to University administrators, complaining the allegations against her were false, Lulu, who describes herself on Twitter as a ‘devilish cub’, took over her mother’s social media account.

‘She keeps tabs on everything,’ says Chua. ‘She tells me what I should and shouldn’t tweet. She’s extremely perceptive and a little bit more critical and that makes her a great adviser for me.

‘I’ll say to her: ‘Should I tweet this?’ And she’ll say: ‘No! You have the worst judgment.’ I sometimes do and say things too quickly, without thinking.’

One of the benefits of bringing up her children the way she did, says Chua, is that you get some very smart, and useful allies. ‘Raise a child who is not entitled and has good judgment and is thoughtful and generous and they can often end up being the wiser one,’ she says. ‘I’ve been impressed with both my daughters that way.’

She stands by the book that made her one of the most famous — and most vilified — mothers on the planet. Her privately educated daughters stand testament to her hardcore parenting style. Despite Chua’s detractors claiming they would be left scarred for life, both are thriving.

Sophia studied Philosophy and South Asian Studies at Harvard then Law at Yale. She is now a captain in the U.S. Army Judge Advocate General’s Corps, the service’s legal arm. Later this year she will marry her fiancé, another lawyer.

Lulu also looks set for a fine legal career, despite being described in Chua’s book as a ‘feral horse’ who screamed, kicked and disobeyed.

When her youngest daughter was three, Chua sent her outside in sub-zero temperatures, as punishment for pounding all the notes on the piano and refusing to press them one at a time. At seven, she threatened to donate Lulu’s doll’s house to the Salvation Army if she refused to master a piano piece.

Both daughters look set to be Tiger Mothers, too, one day. Even the rebellious Lulu has said her mother’s parenting has paid off, telling Harvard Magazine, ‘I don’t think I’ll raise my children any other way.’

One of the greatest strengths of tiger parenting, says Chua, is that it ‘builds resilience and grit’, something she — and her daughters — have needed in recent months.

Chua traces the beginning of her problems to June 2018 when she wrote an opinion piece for the Wall Street Journal in support of Judge Brett Kavanaugh, who had been nominated by Donald Trump for the Supreme Court. Yale had provided Kavanaugh, himself a Yale alumnus, with many of his clerks over the years and Chua praised him as ‘an advocate for women’ and as a ‘teacher, advocate and friend’.

The article came out, she points out, a few months before Kavanaugh was accused of sexual assault by an American professor of psychology when they were teenagers.

Kavanaugh denies the claims made by Christine Blasey Ford but, says Chua, ‘the allegations came out when the #MeToo movement was growing. Almost every other faculty member withdrew their support for him, I was one of the few who didn’t.’ Soon after, claims emerged that Chua had told her female students that Kavanaugh’s law clerks all ‘looked like models’ and if they wanted to work for him, she could advise on their appearance before interviews. Her husband, Jed, is said to have told one that Kavanaugh liked a certain ‘look’.

Chua denies telling students to ‘dress like models’ for interviews. ‘I said he was a conservative judge and that you should dress conservatively.’

If her daughters had been on hand, they might have pointed out it is no longer sensible to dish out this kind of advice to young women.

Soon, Chua, once lauded for getting students coveted judicial clerkships, was being accused of grooming female students. Given that her 62-year-old husband had been accused of sexual harassment last summer — and given a two-year suspension by Yale — the situation became a toxic mess. New York magazine described the pair as ‘pariahs’ in academic circles.

Rubenfeld, who also writes crime bestsellers, denies the allegations against him — he has acknowledged making ‘comments’ that ‘may have made students uncomfortable’ and which he regretted, but added ‘I never sexually harassed anybody. That’s a completely different thing.’

Chua says she is not allowed to discuss her husband’s situation, but that she and their daughters stand by him. ‘It’s very stressful and difficult for all of us,’ she says. ‘It’s been terrible. But we are a strong, cohesive family. The girls are doing great but I think everyone is a bit exhausted at being in the centre of another firestorm.’

Chua is being portrayed as the latest victim of the ‘cancel culture’ sweeping U.S. universities, as it has educational establishments in the UK. None of the students who have made allegations against her have even met Chua. The students who visited her house have also denied any dinner parties took place.

In 2019, with investigations under way into the allegations against Rubenfeld, Chua was scrutinised by the university and found to have engaged in ‘excessive drinking’ with students at their home.

Hosting at home, says Chua, was ‘pretty much expected’ for professors, like her, who mentor ‘small groups’ — members of which have their first degrees and are in their 20s, some in their 30s.

‘Mentoring small groups practically requires socialising and bringing people into your home,’ she says. ‘It is a great way to mingle and get to know each other and break the ice. Other faculty members also hosted these kind of mentorship dinners. I’d been doing it for 25 years with no problems.’ 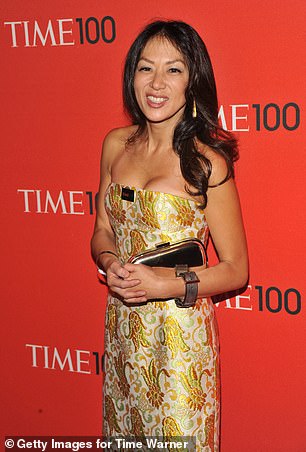 Despite her protestations, she was forced to sign an agreement which included a temporary restriction on socialising. ‘I didn’t concede anything,’ she said, ‘but I agreed that in the interest of moving on, I’d lie low for the time being and not have students over.’

Given this background, the latest accusations that she held drunken dinner parties during the pandemic are very damaging. ‘But earlier this year a couple of students, students of colour, reached out to me, very upset about racial issues, wanting advice and consolation’ explains Chua. The meetings were confidential but one had to do with violent, racist, misogynistic threats.

The weather was freezing, making it impossible to meet outside. She is not, she says, the only faculty member to have had students over in similar situations.

And she insists she didn’t break any rules — the guidance was that having students over was not banned but serving food was ‘strongly discouraged’. She says one student brought a bottle of wine as a gesture but she didn’t drink any and he had only a glass.

Behind the scenes, though, a Yale student was compiling a ‘dossier’ of texts, alleging Chua had been hosting boozy dinners for students and prominent judges during the pandemic.

The first she heard about it was in April when student newspaper the Yale Daily News asked her to comment on the allegations. Chua contacted the Law School Dean who invited her to a Zoom call. ‘I said to her: ‘I feel like I’m being bullied here’. I expected her to say ‘Don’t worry. It’s all ridiculous’ but instead I was grilled for about 40 minutes.’

Despite her denials — and a New York Times investigation which seems to vindicate her — she was forced to give up a teaching role. She was allowed to ‘voluntarily’ withdraw from ‘small group’ teaching rather than be removed.

While continuing to teach larger classes, she is demanding an apology from the Yale authorities.

Above all, says Chua, the past few years have taught her ‘it’s time for a change’. She insists she will carry on as ‘I love my students who are brilliant and fascinating and unbelievably diverse’. But she adds: ‘I’m going to have to be a lot more guarded in future. I will hold myself at more of a distance and be more careful about what I say.’

Can it be that Chua’s claws have been blunted by the very generation whose childhoods, it could be argued, she helped shape?

Chua admits she has softened and realises what really matters is ‘to be happy and close as a family’.

‘I see young parents stressed about their children’s exams or tennis matches and find myself saying — and I can’t believe this is coming out of my mouth — it’s not as important as you think.’