Finance Minister Simon Birmingham says historical sexual harassment complaints will not be investigated by the independent body which is being set up to deal with allegations in Parliament House.

“It’s unlikely to go back through previous parliaments indefinitely, but certainly it will provide for now and into the future a model that actually enables people to have confidence that their complaints can be heard and investigated,” Mr Birmingham told ABC’s Insiders on Sunday. 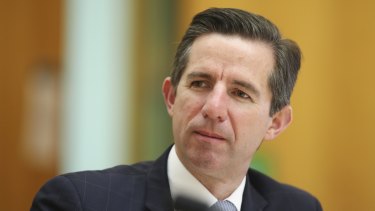 The complaints body was recommended by the Foster review, which was released last month after an investigation into allegations by former Liberal staffer Brittany Higgins that she was raped by a colleague in a ministerial office in March 2019.

Mr Birmingham, the government’s Senate Leader, said the complaints body would “work through issues and provide everybody with the confidence that the best practice processes are in place to protect them”.

The Age and The Sydney Morning Herald published extracts of a book by former Liberal MP Julia Banks on Saturday, which elaborated on her experience of harassment, ageism and sexism within the Liberal Party from 2016 to 2019.

Ms Banks said on one occasion an unnamed cabinet minister whose breath smelled of alcohol, while at a gathering in Parliament House in Canberra, slid his hand up her thigh in a brazen, unwanted advance.

Mr Birmingham said he learned of Ms Banks’ complaint when he read it on the weekend. While the new complaints body is unlikely to launch retrospective investigations, he said historical allegations “ought to be appropriately reported”.

“That’s what we’ve sought to stand up in terms of improved reporting and investigatory arrangements right across the Parliament to support staff, members of Parliament or anybody else,” he said.

Victorian federal MP Katie Allen said on Sunday that while more needed to be done to help politicians and their staff deal with their high-pressure work environment, she felt “very supported” by her federal Liberal colleagues.

“Certainly my experience has been very different from Julia’s,” Dr Allen said.