HENRY DEEDES watches the rattled Health Secretary get mauled at No. 10

Matt Hancock was cowering in the spotlight, his skin as soggy as a wet wipe: HENRY DEEDES watches the rattled Health Secretary get mauled at No. 10

But, oh boy, was it a close run thing. At one point I thought we might have to summon the stretchers.

You’ve gotta hand it to the Health Secretary, it takes a lot to keep this most uppity of upstarts down. After his mauling at the hands of Dominic Cummings this week, few of us would have even made it out of bed the next morning.

This is a man with a hide like a pangolin’s undercarriage. But his performance yesterday was pure agony. 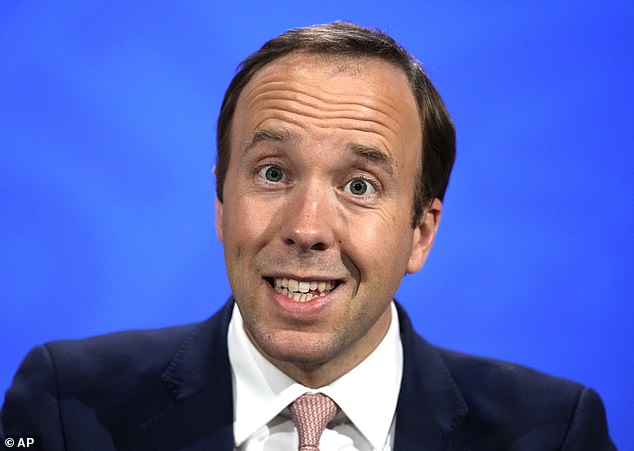 It’s not often you see Mr Hancock rattled. In fact, he positively revels in confrontation. But for the first time in his career, possibly his life, he was cowering in the spotlight.

That cocky gameshow host schtick had deserted him. It was like watching a hare-in-headlights bracing for the dull thud of impact. All anyone wanted to talk about, of course, was the care homes fiasco.

Recap: Acccording to Cummings, Hancock had promised the Prime Minister at the beginning of the crisis that everyone discharged from hospital into care would be tested.

This turned out not to be true. Result: Thousands died.

Questions were fired at Hancock like wooden balls on a coconut shy. Had he lied to the PM? Did Cummings lie?

Our Matt gripped the lectern with both hands in a bid to assert some steely authority. Yet all he could manage were non-answers. He complained the necessary testing capacity was not in place at the time. 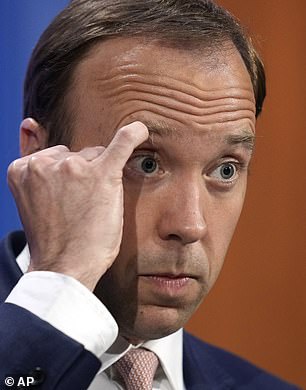 Questions were fired at Hancock like wooden balls on a coconut shy. Had he lied to the PM? Did Cummings lie?

‘I had to build it,’ he moaned, as though he was actually there at the lab in white coat and goggles putting the thing together himself.

As the queries rained in, a thin layer of sweat gathered across Hancock’s cheekbones. Occasionally, there was a nervy scratch of the forehead.

Someone asked if he had promised to test everyone before realising the capability just wasn’t there. ‘There will be time to go into this in detail!’ he flapped repeatedly.

Just when it looked as though the squall might pass, there would come an inquisitive ‘just to follow up on that…’ Oh brother.

To his side stood Dr Jenny Harries, chief executive of the UK Health Security Agency and head of NHS Test and Trace. She’s the one who speaks like a particularly terrifying librarian.

Every now and again she would try to divert the heat from her boss by chipping in with a lecture about the importance of getting the jab. ‘And that’s the thing that really, really matters,’ Hancock nodded.

Nice try minister. A chap from The Times asked whether Hancock had spoken to the Prime Minister since Cummings had thrown him under the bus.

‘The PM and I talk all the time,’ said Hancock, affecting blokey nonchalance. By now his skin was as soggy as a wet wipe.

Did he enjoy Boris’s confidence? He didn’t answer that.

One does fear for Hancock if he loses his job. Where would he be without his ministerial car? It’d be like separating a small child from their favourite blanket.

Mr Hancock does not easily elicit sympathy but it was noticeable when he appeared in the Commons earlier how many of his colleagues turned out to support him.

A protective shield formed around him before the start. 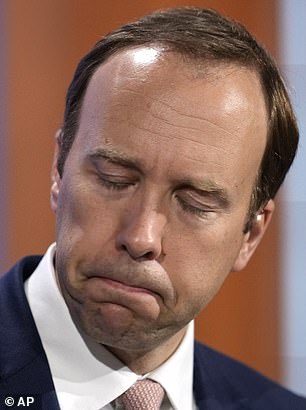 One does fear for Hancock if he loses his job. Where would he be without his ministerial car? It’d be like separating a small child from their favourite blanket

When I say ‘shield’, it consisted of Leader of the Commons Jacob Rees-Mogg and former Cabinet ministers Jeremy Hunt and Andrew Mitchell. I know, I know: hardly the sort of muscle you’d want watching your back in the pub when the atmosphere turns moody.

Of course, it’s possible that some of those who turned out were more motivated by their loathing of Mr Cummings.

William Wragg (Con, Hazel Grove) pointed out the ridiculousness of opposition MPs, who once regarded Cummings as a ‘latter day Herod’, now hailing him as ‘a prophet who fresh from the wilderness brings with him supposed truths written on tablets of stone’.

Peter Bone (Con, Wellingborough) thought the only mistake the Prime Minister made during the pandemic was that he didn’t sack Cummings sooner. It certainly would have saved them all a lot of trouble.