HENRY DEEDES: Palpable rage and a rancid tang of last days of empire

For the past 18 months, this government has ridden out storm after storm. Yesterday, something felt very different. In the political cauldron hung a rancid tang, the whiff of dry rot, a sense of the last days of empire.

In this hotbed of confected anger, the atmosphere spat and bubbled like magma and genuinely seethed. Those invited to speak on the matter of the latest and most damaging Downing Street party scandal did not hold back.

Boris did not turn up to this very public roasting and his no-show only gave MPs even more cause to screech their outrage. At one point tears flowed. 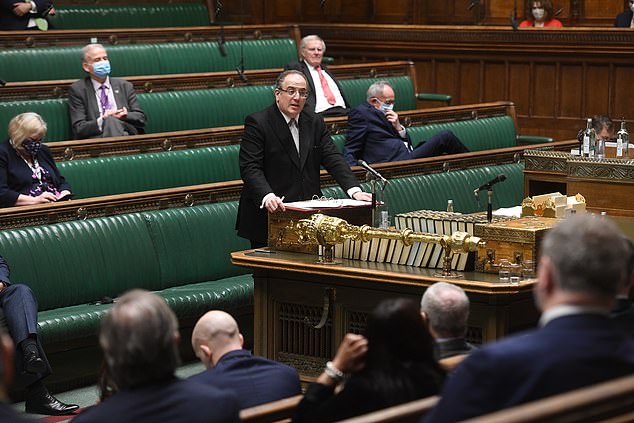 The sacrificial lamb came in the form of Paymaster General Michael Ellis, whose abiding quality is that he would lie down in the fast lane of the M25 at the PM’s bidding 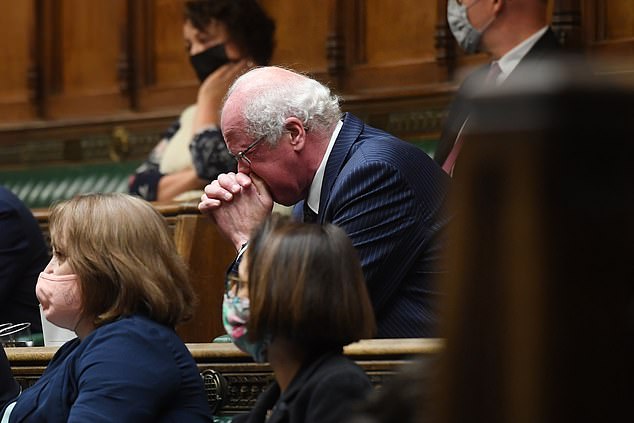 The most painful moment came when Jim Shannon (DUP, Strangford) broke down while recounting how his mother-in-law had died alone. Shannon desperately tried to finish his question but the words simply wouldn’t come, his fist pounding his script in frustration

The sacrificial lamb came in the form of Paymaster General Michael Ellis, whose abiding quality is that he would lie down in the fast lane of the M25 at the PM’s bidding.

He arrived solo. This in itself was telling. Usually, a minister or senior whip might have come along to pump his shoulders but behind him sat no more than a scattering of Tories, offering about as much encouragement as a provincial cricket crowd on a rainy day.

More from Henry Deedes for the Daily Mail…

Poor Ellis. Stranded amid acres of empty green leather, adjusting his ice cube-shaped spectacles and rearranging his pocket square, he bore the manner of the over-eager bachelor who’d arrived early for a wedding.

The question on everyone’s lips was whether Boris had attended this party. Or ‘gathering’, as Ellis preferred. He wasn’t going to tell. This would all be dealt with in an investigation by Cabinet Office permanent secretary Sue Gray. In case you didn’t know, Ellis is a lawyer and proud of it. As such, he speaks in irritating legalese, offering maddening non-answers. This only inflamed the mob further.

The treatment Ellis received during the first half hour really was quite torrid. Each response was met with vicious snarls. Rage was palpable.

Tales abound of those who made sacrifices during lockdown. Missed births, deserted funerals. Afzal Khan (Lab, Manchester, Gorton) spoke movingly of his ‘lovely mum’ who died in March 2020 while he sat outside the hospital in his car in order to be as near to her as he could. The most painful moment came when Jim Shannon (DUP, Strangford) broke down while recounting how his mother-in-law had died alone.

Shannon desperately tried to finish his question but the words simply wouldn’t come, his fist pounding his script in frustration. Opposition MPs made sweeping hand gestures towards Ellis as if to say, ‘See what you’ve done?’ It was a brutal thing to witness and one that should be seared into the minds of every wine-quaffing Downing Street staffer.

There came the inevitable calls for Boris to resign. ‘For goodness’ sake man, go!’ implored Pete Wishart (SNP, Perth). I should add that the Scots Nat have been demanding this of the PM since his first week in office.

No one from the government benches spoke for their boss. The only Tory to join Mr Ellis’s lonely defence was Suzanne Webb (Con, Stourbridge) who boldly suggested the House had better things to discuss: the government’s levelling up agenda, for instance.

Ms Webb, no doubt cajoled by the whip’s office, even managed to squeeze in Boris’s ‘build back better’ slogan. One has to marvel at such brazen ambition.

Much as he would like, Boris cannot hide for ever, of course. Today he must face his detractors at PMQs, which promises to be an excruciating half hour. Mark my words: this will not end well.