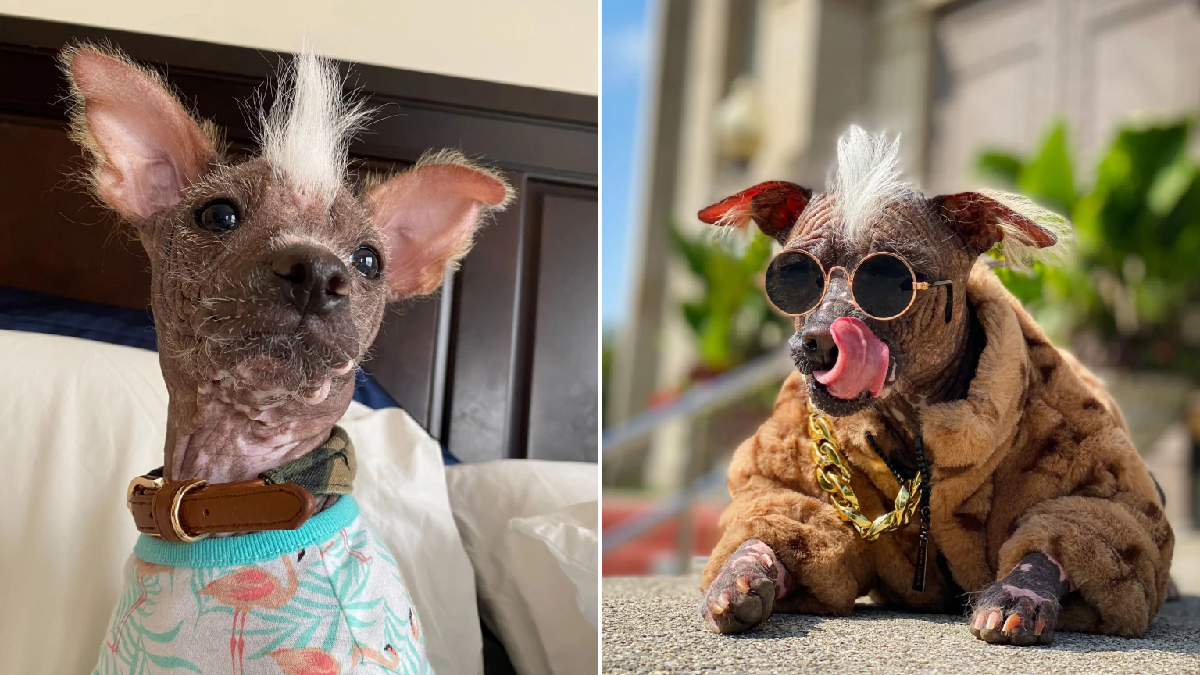 Stripe, a Chinese Crested Shih Tzu, is almost bald due to his breed – but attracts attention with his incredible mohawk.

His owner Cassandra Smetka, from Toronto, stresses that his unique hair is completely natural and is down to mutated genes.

Cassandra and her partner Edward adopted the pooch last year, during the pandemic, but the couple admit they had never seen a Chinese Crested with such an unusual hairstyle.

The pair were specifically looking for a hairless puppy as they both struggle with pet fur – and when they first set eyes on three-month-old Stripe, he was the only one left in his litter.

Cassandra, who works in education, said: ‘His baldness is natural, as well as his mohawk. It is a result of a mutation in one of his genes called FOXI3, which also affects the development of teeth. He has an abnormal orientation of his canines because of this.’

Stripe’s unusual look has also made him a bit of a celebrity, both locally and on social media.

But Cassandra adds that people sometimes mistake him for a ‘pig’ or a dog with alopecia, due to his lack of hair.

She says: ‘There are people who think he is a different animal altogether, we have had someone ask if he was a pig as he has the little curly pig tail.

‘There are also people who think he has canine alopecia. On the other hand, we get a ton of support and people who love his hair and overall look.

‘Many people are just genuinely curious and will stop and ask to pet him. We love sharing him with the community.

‘We always get questions if we shaved his whole body and left the mohawk, or if we style it that way. Our answer is simply “no,” he was born with his mohawk and there is no upkeep.’

As Stripe is a hairless dog, he requires special care such as SPF and sun-suits in the summer.

He also has a special antibacterial and antifungal shampoo, which helps improve the effectiveness of his skin barrier to environmental allergens.

Stripe’s striking appearance has also led to a number of modelling opportunities.

Cassandra adds: ‘We started off doing collaborations here and there. Eventually we applied to be models for Hype Pups, a designer pet boutique, and got accepted.

‘Now we have a large collection of their clothes and Stripe’s fashion sense has surpassed mine. He has clothes for every occasion now.

‘Recently my mom, Stripe’s grandmother, has started to sew and she has made quite a few of his winter outfits. He is rocking Sherpa and fleece for winters in Canada.’