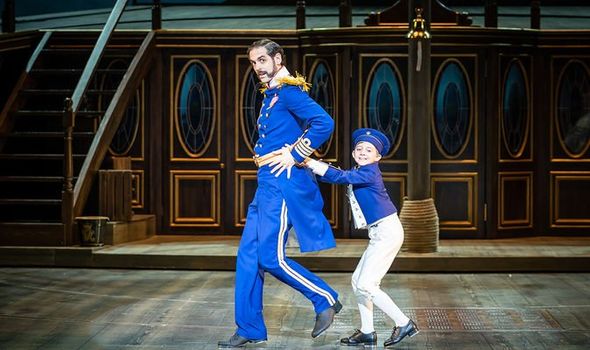 Like most G&S, Pinafore is rather outdated and needs a good director to introduce some twists that appeal to a modern audience and on past performance, Cal McCrystal had all the right credentials. With two Paddington films and the stage hit One Man, Two Guvnors under his belt, as well as numerous other successes, he has repeatedly shown his ability to lift and sustain the comic level of a show. Three years ago, he made his G&S debut with the ENO with a scintillatingly inventive production of Iolanthe, but this time, I feel he has slightly missed the mark.

On the plus side, the cast is led by John Savournin as Captain Corcoran, commander of the Pinafore. Having himself frequently directed G&S operettas as well as being a fine bass-baritone singer of more serious opera and a surprisingly good dancer, the experience and expertise he brings to the role is perfect. The quality of the singing of tenor Elgan Llŷr Thomas (as Ralph Rackstraw) and Australian soprano Alexandra Oomens (as Josephine the captain’s daughter) was also far better than one usually hears in G&S, while Welsh contralto Hilary Summers was perfect as Little Buttercup, but the casting of Les Dennis as Sir Joseph Porter, First Lord of the Admiralty was the weak point of the production.

The ENO always tries hard to bring new audiences into opera and make people realise that it can be a great experience, terrific entertainment, and isn’t at all elitist, but for all his long and varied experience, ragning from Family Fortunes and Coronation Street, to films, musicals and the Royal Shakespeare Company, Dennis’s somewhat dodgy singing and poor musical rhythm made him seem somewhat out of his depth here.

A distinctly more successful innovation, presumably the idea of the director, was to introduce a new character in the shape of cabin boy (or ‘Midshipmite’ as he is styled in the programme), Tom Tucker, played with great gusto by nine-year-old Rufus Bateman. In the first act, I found his presence and the way he shouted his lines rather irritating in the effortless way only a nine-year-old boy can irritate, but he really came into his own at the start of act two, leading the entire cast in a glorious tap-dance sequence beautifully choreographed by Lizzi Gee.

Suddenly, Rufus Bateman’s outstanding talent became clear and I later read that his precocious tap-dancing had already established him as an Internet sensation. After that, I viewed him with much greater respect and began to understand why the part had been created for him. We also saw him later mischievously forming anagrams from the letters of the ship’s name, at one stage holding the N and M of H.M.S. Pinafore having rearranged the other letters to spell out the words “FISH OPERA”.

That was funny – though some of Cal McCrystal’s other ideas seemed to be to be unnecessarily distracting when there was already plenty of onstage action to look at. His introduction of an elderly woman (one of Sir Joseph’s numerous sisters, cousins and aunts) hobbling all too frequently across the stage, for exmaple, was both unnecessary and in poor taste.

Listening to members of the audience after the performance, I could tell that reactions were very mixed: Some loved it all, and thought that Les Dennis was wonderful; others were grumbling that the entire production missed the point of the G&S humour. I just thought it was rather disappointing, though the tap-dancing and John Savournin made it worth seeing.