Federal Treasurer Josh Frydenberg has implored a thousand of his supporters to harness the “power of the dark blue” to overcome a contest from his teal-coloured independent challenger.

In a 15-minute speech, the treasurer said a vote for former paediatric neurologist Monique Ryan would be a vote for a “chaotic” hung parliament that would make it more difficult for future governments to pursue big policies like JobKeeper or the AUKUS security pact. 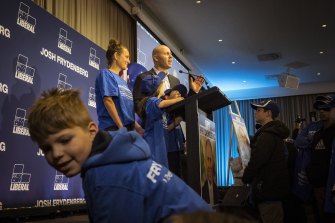 Josh Frydenberg shares a moment onstage with his family as he began his campaign for re-election in the seat of Kooyong before 1000 local constituents.Credit:Chris Hopkins

“If they vote for a so-called independent, they will get Anthony Albanese and the Labor Party,” the treasurer said. “This is the choice. And we know the Liberal Party represents the values and ideals of the quiet Australians.”

The treasurer’s electorate of Kooyong has been the seat of Liberal royalty. Former prime minister Robert Menzies held the electorate – in Melbourne’s inner east – for 32 years. Former opposition leader Andrew Peacock was also a member for Kooyong.

Yet at this election, the seat is under serious threat for the first time from “teal” independent Monique Ryan.

Frydenberg, who spoke with no notes, repeated his regular attacks on the climate-focused fundraising body Climate 200 – which has provided about half of Ryan’s funding.

The treasurer called the group a “political party” and argued Ryan, who was a Labor Party member between 2007 and 2010, would deliver a Labor government in the event of a hung Parliament. He added that this was against the interests of Kooyong voters, who have never elected a Labor MP. 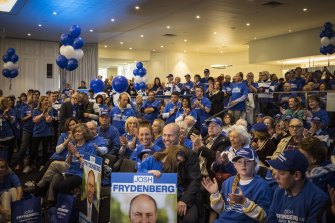 Frydenberg also thanked former Victorian premier Ted Baillieu, who was in the crowd, for his support during the campaign. Baillieu’s son, aged in his 20s, holds a senior campaign role in Ryan’s team.

Approximately 1000 people attended the launch at the Leonda by the Yarra function centre in Hawthorn.

Tennis player turned state Liberal candidate Sam Groth was the emcee at the event and opened proceedings by welcoming the room of “real Liberals” – another dig at Ryan. 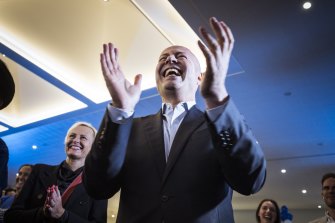 All happy and clappy. Josh Frydenberg at his campaign launch.Credit:Chris Hopkins

Absent, though, was John Howard – a former PM who knows more than most about losing his own formerly safe seat. Groth read a message from Howard saying he would have been there but was attending the baptism of his youngest grandchild.

Cut through the noise of the federal election campaign with news, views and expert analysis from Jacqueline Maley. Sign up to our Australia Votes 2022 newsletter here.