The Frank Gehry-designed arts laboratory and campus created by Maja Hoffmann was inspired by Van Gogh, who brought fame to Arles in the late 1800s. 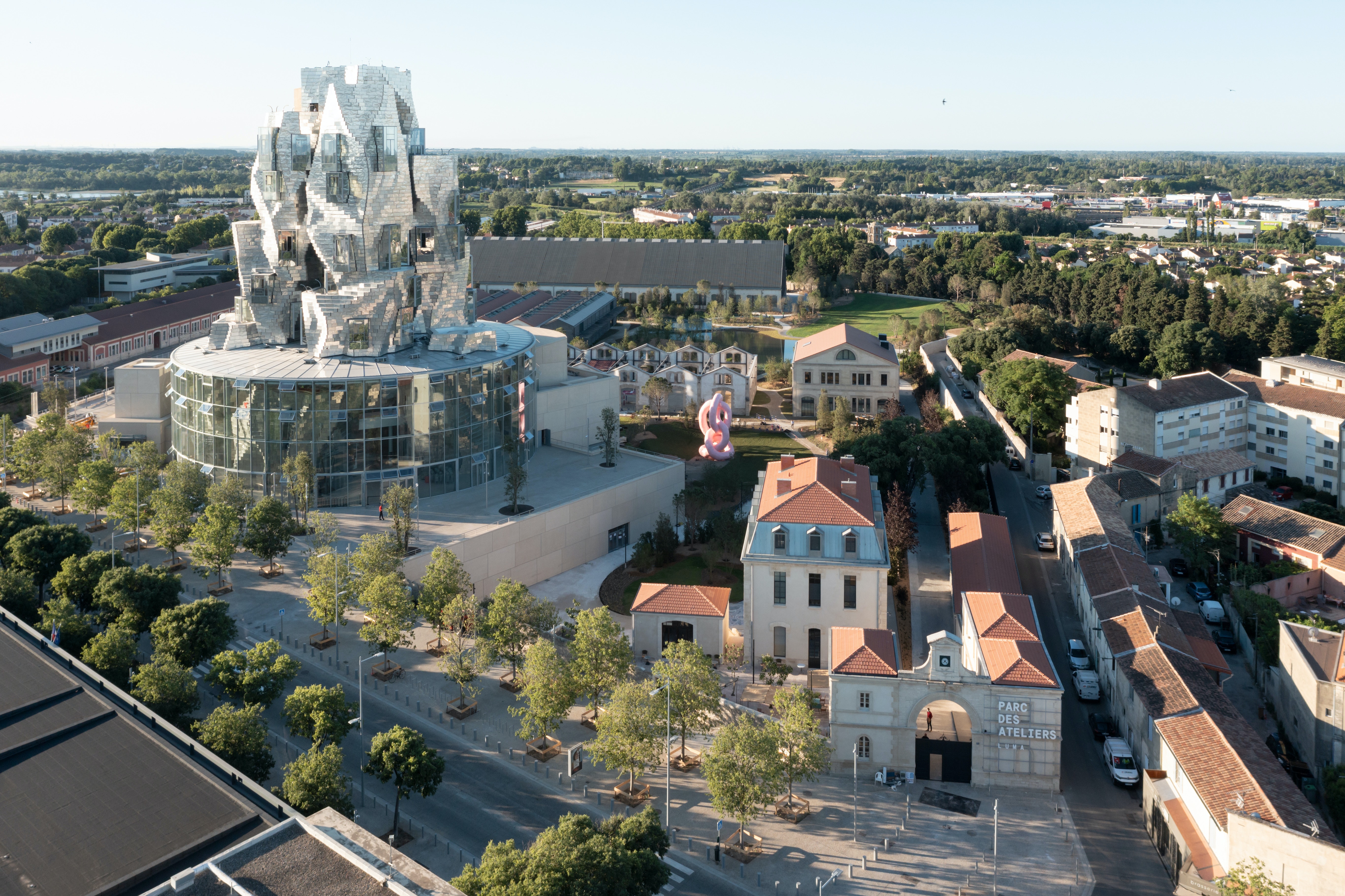 The sleepy town of Arles, in the Mediterranean South of France, is known mainly for two things: its Roman and Romanesque history, and the fact that Vincent van Gogh lived there for about 15 months toward the end of his life—sufficient time to create some of the most instantly recognizable and beloved paintings in the history of art. Now, however, Arles is becoming an unmissable destination on the global contemporary art circuit, not by relying on its past but by confidently looking to the future.

The first thing visitors approaching the town will notice, driving past the bucolic lavender and sunflower fields, is a stacked geometric tower that might initially seem like it alighted from outer space—except for the way in which, slowly but confidently, it claims a place amid its surroundings. Made of 11,000 stainless steel panels, it was designed by the architect Frank Gehry and is the centerpiece of the Luma Foundation’s Parc des Ateliers—a cultural complex, think tank, and artistic laboratory that had its grand opening this past weekend, after 13 years of planning, wrangling, and cutting through red tape. Gehry says he designed the building using a soft, warm metal that could capture and play with the light that inspired Van Gogh; the staggered shapes are meant to evoke the Romanesque architecture of the region, which Gehry first discovered when he visited Arles as a student in 1959.

A bird’s eye view of Arles and the Luma structure.

The Luma Foundation—and, by extension, the Parc des Ateliers—is the brainchild of the redoubtable Maja Hoffmann. To say that Hoffmann is familiar with the art world is like saying the Inuit know ice: a collector, patron, philanthropist, and tireless promoter of artists, Hoffman produces extraordinary projects all over the world. The Luma Foundation may be her baby—after all, it is named after her children, Lucas and Marina—but Hoffman has regularly supported cultural institutions including the Palais de Tokyo in Paris, the Serpentine in London, the New Museum in New York, and the Kunsthalle in Zurich. As she welcomed visitors to the drum-like atrium of the Gehry building, which is known simply as “The Tower,” Hoffmann explained that creating a structure that soared into the sky was a way to have a vantage point from which to expand Arles’ horizons, both figuratively and literally. “My desire was to be able to see the sea from this Roman town,” she said. “To show that we are open to the Mediterranean.”

Hoffman’s connection to Arles is personal. Her family founded the Swiss pharmaceutical giant Hoffman-La Roche, but Hoffman spent much of her childhood in Arles and the vast surrounding wetlands of the Camargue, which are also visible from the top of the Tower. Her father, Luc, an ornithologist who was deeply involved in natural conservation, created La Tour de Valat, a center to protect the area’s biodiversity, and cofounded the World Wildlife Fund. During the last years of his life, he also funded the Van Gogh Foundation in Arles, in which his daughter remains very active. A couple of days before the opening of the Parc des Ateliers, Hoffmann feted a striking exhibition there, which juxtaposed select Van Gogh paintings with works by the contemporary Los Angeles-based artist Laura Owens.

A look at the works by Diane Arbus on view.

Films by Derek Jarman are part of Luma’s current exhibition.

For the main event on Saturday, Hoffmann hosted a dinner for more than 600 friends, artists, and collaborators on a large terrace at the Tower. It was an opportunity for newcomers to explore the grounds of the Parc des Ateliers. Vast disused industrial structures, which were once part of a railyard, have been given a second life by the architect Annabelle Selldorf, and now serve as generous exhibition halls. One featured highlights from Hoffman’s personal collection, amassed over decades and featuring works by Diane Arbus, Etel Adnan, Urs Fischer, and Franz West, among others. Another housed “After UUmwelt,” a large-scale installation by Pierre Huyghe, in which ant and bee communities, cancer cells, and mental images in formation created an environment in which organic and inorganic life forms could evolve on their own. As guests ambled to dinner, they were greeted by members of staff singing a tune created by the artist Tino Sehgal.

Despite the complexity of some of the work, Hoffman, stressed that cultural events at the Parc des Ateliers would be multi-pronged and never rigid. She pointed out that on the campus there is a glow-in-the-dark skatepark designed by the Korean artist Koo Jeong A; adventurous visitors could also venture down two intertwined metal slides by Carsten Höller. Those who merely felt like enjoying their surroundings could hang out at the open-air café, designed by the artist Rirkrit Tiravanija with exposed piping and concrete and sunflower panels, or enjoy the bucolic grounds, which were slab platforms until the landscape architect Bas Smets used indigenous trees, shrubs, and grasses to create a lush public park centered around a naturally sustainable pond.

“The idea is to bring world-class artistic programming to the countryside, rather than have it exist only in big art capitals.” Hoffmann said. “But we also want and have to be open to the local community.” She’s off to a good start.