Music has always been the way Florence Welch made sense of the world.

As the frontwoman and songwriter of the British rock band Florence and the Machine, Welch has spent the past 15 years using her songs to explore everything from love (Never Let Me Go), to disordered eating (Hunger) to the pure joy that comes from liberation (Dog Days Are Over, the group’s most commercially successful single).

But what happens when what you’re trying to make sense of is music itself? That’s the challenge Welch sets herself with the band’s fifth studio album, Dance Fever (released Friday), their first full-length release in four years. 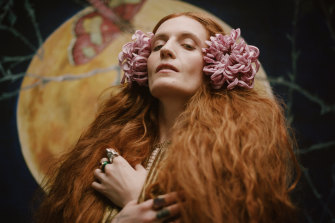 Florence Welch of Florence and the Machine.Credit:Universal Music

It’s why her work has always captured my intrigue. Welch seems to be at a tug-of-war between conflicting ideas, but manages to find synthesis. The band’s last album, High as Hope (2018), examined the consequences of addiction, Welch’s eating disorder and her early adulthood.

On it, Welch makes sense of the good and bad: she confronted the darkness of her drinking on the track Grace, an apology to her sister for whom she “treated the worst”. But that period of her life was light too, which she warms to in South London Forever, where harped instrumentals evoke the feeling of newfound adulthood. 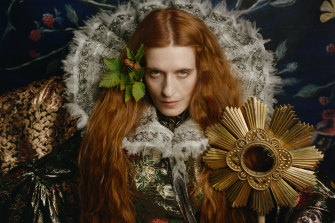 She tells me that while High as Hope confronted her decision to go sober in a way that concluded it would “fix everything,” Dance Fever concedes that long-term sobriety is not the answer she thought it would be.

But still, despite not being what she expected, going sober was the best thing she’s done, personally and creatively, she says. Giving up drinking also gave her lyrics a sharpness that was absent from her earlier albums, Lungs (2009), Ceremonial (2011) and How Big, How Blue, How Beautiful (2015).

Compare the transformation of her lyrical style from the opening lines of the track Between Two Lungs from the band’s debut album:

To the opening lines of the track Back in Town from Dance Fever:

“I’m able to be so much more brutal and clear with my lyrics because I have found more honesty in my life,” Welch says.

Personally, the brutal clarity is what draws me to Welch’s later work – but it’s not for everyone. A friend of mine can’t listen to her music, not because she doesn’t like it but because her work cuts to the heart so sharply.

What happened after sobriety? After facing her compulsion to drink, Welch confronted another compulsion: music. She didn’t know why she could never break free of the cycle to make album after album.

“I have to keep making things to keep up this dance, and to keep up the dance of touring. Which at some point, I’m like, is this for a good reason? Or is this almost like a death drive.”

Being in control by being out of control, being both freed and restrained are ideas grappled with in Dance Fever. When I ask Welch if the compulsion to make music and tour could be a substitute for the drinking, Welch laughs as she considers it.

“The drinking would just turn the sound down and allow me to be present … performance and making music does exactly the same thing. I just don’t f— my life up as much.” 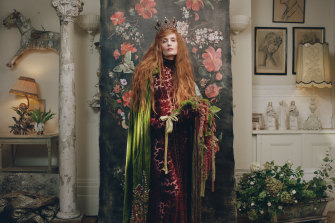 “I’m able to be so much more brutal and clear with my lyrics because I have found more honesty in my life,” Welch says.Credit:Universal Music

It’s this tension that forms a major part of Dance Fever, produced by Welch, Jack Antonoff, and Dave Bayley of Glass Animals. Welch describes the 14-track album as a “be-careful-what-you-wish-for fable”.

Why? Because when the pandemic hit, the spell was broken: Welch lost the music – which became the problem she needed to solve on this album.

Welch tells me that the tale begins in March 2020.

“Even though I’d said I quit [music], I just found myself running to New York to start another record,” she says.

Welch ran to Antonoff, the Grammy Award-winning producer who has collaborated with the likes of Taylor Swift, Clairo, St. Vincent, Lorde, Lana Del Rey and who is the frontman of indie pop band Bleachers.

They made King, Free and Choreomania together – the three songs that open the album, all of which are threaded together by the question, “Why can I not stop this dance?”

King, the lead single, is Welch’s favourite song that she’s ever made. Motherhood and marriage had started to call her, but she’s not sure whether she can answer.

Choreomania was inspired by the social phenomenon between the 14th and 17th century known as “dancing mania”, where adults and children would dance until they collapsed, for reasons still unclear. Welch likes the theory that it was a reaction to stress.

“I understand why you would want to just run out into the street and dance wildly.”

Back in New York, Welch knew it was time to face the music of the pandemic when her mum called. Upon returning to London, Welch found it hard to work with Antonoff remotely. It was then, as home-bound life was enforced, that she lost the music.

“It really was like the song had abandoned me.”

“I didn’t write for a really long time because [with] songwriting you have to tap into a subconscious place and just let it go, and every time I tapped into my subconscious, I just started crying.”

It’s as the careful-what-you-wish-for fable unravels where we can see Welch’s ability to find clarity while maintaining the complexity, which she explores in later tracks of the album.

My Love describes the grief she felt about her writer’s block. Cassandra speaks to the character of song, asking for guidance.

Eventually, guidance was found: The Welch who is talking to me has come back to music. The album has been released, her global tour has been announced.

It really was “a journey back to the stage [after] really kind of going down to hell.”

In the final moments of our interview it becomes clear how, and why, Welch did come back to music.

“I’ve always been the same since I was a kid. I’ve never not been worried or neurotic. But I would put music on and dance in my room alone, and I would feel completely free.”

“That’s what music has always given me.”

Dance Fever is out now on all streaming platforms. Florence and the Machine’s Dance Fever Tour is coming to Australia in March 2023. Tickets can be purchased via Frontier Touring.