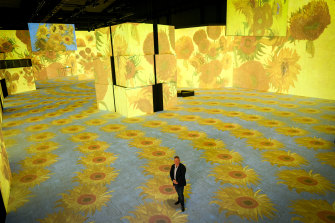 Bruce Peterson, founder of Grande Experiences at The Lume.Credit:Eddie Jim

As you step into The Lume, billed as Melbourne’s new and Australia’s first permanent digital art gallery, the sheer scale sends your mind reeling.

When The Age visited for an exclusive preview the team were rehearsing their exhibition, titled simply Van Gogh, that opens on Monday.

Hidden projectors blasted a seemingly infinite field of sunflowers across the 3000 square metres of white carpet and up the 11m walls of the cavernous space, carved off the last two bays of the Convention and Exhibition Centre at South Wharf. 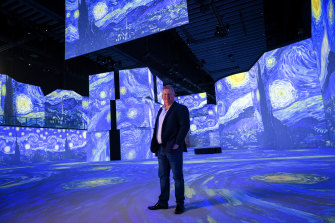 Suddenly, the intense yellow was replaced by a moody blue, as the artist’s starry night swirled around, the brushstrokes the size of your arm. Speakers played classical hits as a voice-over recounted the life of this unique artist.

As a spectacle, it’s likely to be a crowd-pleaser when it opens – even if it sends chin-stroking art aficionados into apoplectic fits over liberties taken with iconic works.

But Bruce Peterson, owner and founder of the company behind The Lume, has ambitions beyond dropping some jaws.

“What we’ve done here is create Australia’s first digital art gallery, the first in the southern hemisphere,” he says. 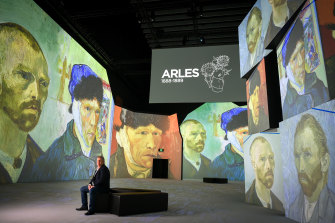 All systems are Gogh for a November 1 launch of The Lume.Credit:Eddie Jim

They will feature exhibitions produced at their studios in Port Melbourne, London and Rome: but they’re also commissioning emerging digital artists in this fast-growing field. Peterson wants to take them from the usual canvas of (if they’re lucky) a wall in a little gallery and let them loose on digital art’s equivalent of the Sistine Chapel.

Peterson calls on an assistant to give a demo. Suddenly, the floor becomes a dizzying, thrashing sea. Then the walls pulsate with inscrutable, computer-generated forms, plunging us into the metaverse.

We’re just touching the surface of what’s possible at the moment.

“The young digital artists now emerging don’t actually have a platform to display a lot of their great work,” he says. “They’ve got TV commercials or the gaming industry but often it’s just a small 2D area which doesn’t do a lot of it justice – where we’re going to have this great canvas for them.”

They aim to show contemporary artists as “shorts” after the main show, and in special one-night exhibitions.

They are also working with the Australian National Museum on a big Indigenous experience featuring hundreds of artists, co-curated by the museum’s senior Indigenous curator Margo Neale.

He imagines hosting contemporary dance performances, interacting in real-time with a video projection surrounding them.

“We’re just touching the surface of what’s possible at the moment,” he says.

For 15 years cities from Mexico to Denver to Adelaide have hosted Peterson’s exhibitions and “experiences”. But six years ago, he decided he wanted to go further: to triple the size of their travelling shows in a permanent space.

The Lume uses 143 high-definition, high-powered projectors: their travelling shows use 30. It has 65 kilometres of electrical and data cabling, and the floors plus the walls equal 4400 square metres of projection surface.

Which poses the question: is bigger better? If you’re showing the world’s greatest art, why do you have to make it three storeys tall?

Peterson tells a story in answer. He was taking his kids around the great galleries of Italy and France, and found “five minutes into it there was a tug on the hip pocket and they were saying ‘let’s go get gelati, this is boring,’”

“I asked them why is it boring, we’re in the middle of art and culture and history? And they just said well, nothing is moving. And my daughter said, ‘gee it would be good if there was some music, dad’. And that was my ‘a-ha’ moment because I saw the change that was coming with that generation.

“They value less the actual, material object, they value the experience more than anything. If we integrate as many of the human senses as we can at one time: vision, audio, aroma, your kinaesthetic sense of space, and if you have them all working together, you get an amplified outcome and often that’s an emotional one.

“This emotionally touches people, which is a very difficult thing to do in two-dimensional galleries.”

Basically, he wants a child’s first experience of art to be “a joyful one”.

“I think you’re a better human and a better person when you’ve got art and culture in your life,” he says. “But we’ve got to have people engaged.”

The Lume opens Monday, November 1 with tickets on sale here.