Fears of psychiatrist shortage after two years of cancelled exams

Hundreds of trainee psychiatrists have been unable to complete their exams during the pandemic despite serious concerns about workforce shortages in Australia’s mental health sector.

The latest attempt at holding the Royal Australian and New Zealand College of Psychiatrists (RANZCP)’s final trainee exams via video link were abandoned midway through on Saturday due to technical difficulties. 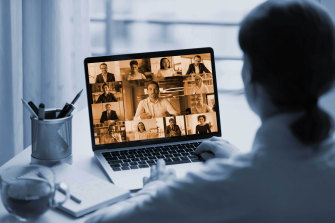 Doctors attempting their psychiatry exams expressed frustration after the tests were again affected by technical difficulties.Credit:iStock

A letter sent by the NSW Association of Psychiatry Trainees expressed “concern and disappointment” the exam had not been able to go ahead, after being postponed from October 30.

Footage seen by The Sydney Morning Herald and The Age of a debrief meeting held after the cancelled exam showed heated discussion between trainees and college examiners which descended into participants shouting over the top of each other.

It was the third time the exam, which doctors must pass to become a fully qualified fellow of the college, have been cancelled since April 2020, when they were first disrupted by COVID-19 restrictions.

While two exams have successfully been held during that time with a reduced number taking part, a national survey of trainees conducted by the association found 88 per cent reported having two or more attempts at the exam delayed or cancelled and 27 per cent said all five exams had been disrupted.

In a statement, RANZCP said 90 of the doctors taking Saturday’s exams were from NSW, where trainees were previously affected by the cancellation of an exam in July with one week’s notice. Twenty-seven of the centralised exams were completed in NSW during 2020 and 2021, compared with 170 during 2018 and 2019.

The state’s trainee association’s president, Dr Jarrod Bradley, said in the letter to RANZCP president Associate Professor Vinay Lakra there was “growing resentment” towards the college among trainees.

“Trainees do not believe the college has demonstrated its ability to organise any form of OSCE [objective structured clinical exam] assessment in an appropriate or timely manner,” he said, calling for doctors who had consistently performed well in ongoing assessments to be awarded a pass.

Benjamin Veness, advocacy officer for the Victorian Association of Psychiatry Trainees, said the impacts of the exam cancellation meant the college could not just “decide to try running it again in a few months time”.

“It has implications for a trainee’s employing health service, their colleagues, their families; trainees put their lives on hold for this exam,” he said.

The Australian Medical Association (AMA) has written to the college and its president expressing its concern.

Last year, exams for the college of GPs were also cancelled due to a system outage. In minimum standards developed by the AMA’s trainee forum afterwards, it said all colleges should have a contingency plan for when technology failure disrupts an exam.

AMA vice-president Dr Chris Moy said the issue needed to be resolved urgently, both to boost the mental health workforce and because the college would likely struggle to accommodate the backlog in next year’s exams.

“If there’s one area of medicine we really need in a post-COVID world, it’s psychiatry,” he said.

There are about 3600 psychiatrists in Australia, according to the Australian Institute of Health and Welfare. Last month, an advocacy group led by Professor Pat McGorry said this number needed to be doubled.

Trainees who spoke to the Herald and The Age said they did not understand why the college had struggled to hold the exam remotely when others with more complex requirements – including the treatment of real patients, as opposed to actors – had gone ahead.

Dr Marie Bismark, an advanced psychiatry trainee, said the continued cancellation of exams was “devastating” for trainees who were exhausted after working on the frontline during the pandemic.

“I’ve been working on COVID wards providing mental health care with an increased workload and studying on top of that … you give up so much to get through,” she said, noting she was forced to cancel two weeks of outpatient clinics to study due to staff shortages.

A Sydney psychiatry trainee, who asked not to be named as she did not want it to affect her training, said she had been attempting to sit the exam for two years.

“Colleagues of mine have expressed thoughts of giving up psychiatry as a career, and pursuing non-clinical medicine,” she said. “Some are so close to becoming psychiatrists, but just can’t face studying for this exam any more.”

A RANZCP spokesperson said the college was committed to facilitating the accreditation of as many “highly qualified” trainees as possible, including through flexibility in their progression.

“The RANZCP’s priority is the wellbeing of its members in acknowledgement of the significant distress that has already been experienced,” they said, acknowledging the “devastating impact that preparing for the assessment has had on many personally”.

Most Viewed in National