Ryan, arguably the country’s leading Shakespeare director, had long toyed with making films of the Bard’s plays. “This felt like a great opportunity to try within a very chamber-like space,” he says. “It was kind of manageable rather than having to deal with all sorts of complex and expensive locations. It seemed like an opportunity to do something very actor-centric, very character-based, but still using Shakespeare as kind of a fulcrum.” 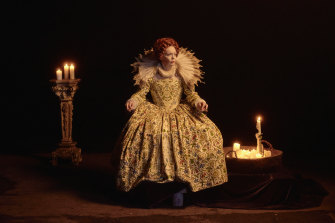 Ryan rehearsed his actors as if they were doing a play, even running the script non-stop several times before they began shooting in December last year. “We were filming from 3.30 in the afternoon when the preschool right next door would finish for the day,” Ryan recalls, “and we’d go until about three or four in the morning, when it was nice and quiet. We’d stop every 20 minutes until about 1am for a tram bell that would pass. The most commonly said thing on the set was, ‘Holding for tram’, and then we’d continue.”

Ryan sought a moodier, more dangerous personification of Shakespeare than that in, say, Shakespeare in Love, trying to investigate some of the mysteries surrounding the man and his writing. “I was looking at a darker, more libertine-type world behind the scenes,” he says, “beginning with a man with syphilis, and problems in his marriage and his family.”

While conceding Venus and Adonis is not among Shakespeare’s ultimate masterpieces, Ryan points to some “absolutely breathtaking” passages. Nonetheless, after he’d begun writing, he felt an audience might need a doorway into the poem’s world, via Shakespeare (played by Anthony Gooley) and via Amelia Lanyer (Adele Querole), the first English female professional poet, whom Ryan portrays as Shakespeare’s mistress.

Historically, this is more rumour than fact, but Ryan is happy to bend history to his needs – as was Shakespeare. In the play within the film, the pioneering Lanyer takes the role of the libidinous Venus.

Ryan puts a feminist lens on the camera in a much more sophisticated way than the asinine box-ticking that afflicts so much contemporary theatre. Using a cast including Belinda Giblin as a tart, intelligent Elizabeth I, Ryan draws the audience into a narrative surrounding a singularly credible depiction of the world’s most famous writer (with his gift for stealing others’ ideas and elevating them to the sublime). He then pulls focus on to Lanyer, and what “a woman in the period might have thought of the ‘sluttification’ of the great female god, Venus, by a male playwright”.

The film is also charged – the eroticism in the poem is either overt or is veiled in imagery as thin as a negligee. Indeed, had Venus and Adonis first appeared in Victorian times or even in the first half of the last century, many a chief censor may have refused publication.

Venus and Adonis is at Event Cinemas, Castle Hill on January 29 and then selected cinemas.