Australia’s dairy industry is preparing for a global fight over the right to use the name haloumi after the European Union vowed to restrict cheese manufacturers outside Cyprus from marketing their products under that name.

The decision is another potential source of friction in any future trading relationship between Australia and the powerful EU trading bloc, which is insisting Australia adopt its “geographical indications” system that protects products it believes possess qualities or a reputation associated with certain regions. 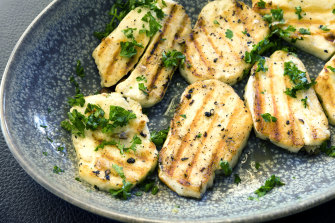 The semi-hard cheese made from goat and sheep’s milk is produced in numerous countries, including Australia, Britain, Canada, New Zealand and several in the Middle East.Credit:iStock

Cyprus, which has a population of about 1.2 million people, on Wednesday hailed the decision to recognise the famously grillable cheese as a product distinct to the divided eastern Mediterranean island after a seven-year wait.

It adds haloumi to a list of food names such as Parmesan, feta and chorizo the EU is attempting to monopolise in global trade.

Australian farmers and food manufacturers have labelled the GI scheme a “Trojan horse” for European protectionism, which could cost the industry tens of millions of dollars domestically and abroad.

If the EU’s demands are adopted, about 56 cheese products in the Australian market would be impacted, hitting a large proportion of local production and exports, imposing considerable and unnecessary costs for many parts of local industry and their regional communities.

While haloumi is not currently listed as a GI request under the pending Australia-EU free-trade agreement, Australia’s multibillion-dollar dairy industry fears the latest development could see it added once the trade deal comes into effect.

The semi-hard cheese made from goat and sheep’s milk is produced in numerous countries, including Australia, Britain, Canada, New Zealand and several in the Middle East. A lengthy battle in Europe resulted in British cheese makers calling their product “Squeaky Cheese”.

“Now they have opened up the possibility of adding to that list once the agreement is finalised and it is simply going too far. We need to prevent this FTA from allowing the EU to take over our cheese names,” Mr Richardson said

He said the dairy industry wasn’t persuaded by the EU’s argument that haloumi should be protected under the GI system because it was unique to Cyprus.

“Haloumi is a cheese that can be, and is, produced anywhere in the world,” Mr Richardson said. “The origin of the cheese is irrelevant because the name is generic and associated not with the region in Cyprus, but with a certain taste, texture, and functionality.

“Geography doesn’t enter into it. Claiming there is a special knowledge that only producers in Cyprus possess is absurd and will lead to an unfair and anti-competitive outcome.”

‘Claiming there is a special knowledge that only producers in Cyprus possess is absurd and will lead to an unfair and anti-competitive outcome.’

Dairy is one of Australia’s most important rural industries, producing about 8.8 billion litres of milk and directly employing about 46,200 people. It is the fourth-largest rural industry in Australia, generating about $4.4 billion in farm-gate value.

A large proportion of exports, valued at $3.2 billion, are in the form of value-added products such as cheese, butter, ultra-heat treated milk and milk powders. Australian haloumi is both sold in supermarkets and speciality stores throughout the country and exported, predominantly to Asia.

The industry estimates the EU’s demand to restrict cheese and dairy product names could put at risk local products with an aggregate sales value of more than $650 million. The potential direct impact on Australian dairy manufacturers in lost sales and increased marketing costs caused by the strict enforcement of GIs could range from $70 million to $90 million a year in the early stages of the FTA.

Cypriot President Nicos Anastasiades said it was “a milestone day for halloumi” with a “shield of protection” now in place.

Cyprus was split along ethnic lines in 1974 when Turkey invaded and occupied its northern third in the wake of a coup by supporters of a union with Greece. The country joined the EU in 2004, but the bloc’s rules and regulations apply only to the southern, Greek Cypriot part of the island led by an internationally recognised government.

Federal Trade Minister Dan Tehan said while the EU had not asked Australia to protect the name as part of the trade negotiations, he understood the importance of the continued use of the term haloumi to the industry.

“The government will not decide to protect GIs under the FTA unless the overall deal is in Australia’s interests and no action would be taken on any future GI requests without the government working with the Australian dairy industry first,” he said.

“The EU geographical indications regime is a Trojan horse for European protectionism and this is a very worrying development in the context of free-trade negotiations with the EU,” he said. “Decades of perfecting a craft, marketing and IP will be undone by signing up to a regime that has protectionism as its main objective.”