Aidan Euan’s not entirely sure if it reads on camera — spoiler: it does — that, when dressing Alexa Demie as Maddy Perez on “Euphoria,” he gave her a modern-but-nostalgic Mexican American stamp from the homes of his youth, the first being in Yucatán and the second in SoCal.

When designing the iconic outfits Maddy wears to strut down the hallways of East Highland High (or the occasional hospital wing) like it’s a runway or to bang on bathroom doors at parties, Euan tried to take the Y2K zeitgeist from his diasporic childhood and drape it on her — with a couple of Swarovski crystals to serve as the glittery cherry-on-top.

“The mood boards that I created to get to those ideas come from her character and who she is in my head,” Euan says. “Maddy is a mix of a lot of the telenovela and Latina stars of the early 2000s, like the girls of ‘Rebelde,’ Thalía and Sonia Chavarría (Marlene Favela) from ‘Rubí,’ as well as the U.S. pop stars of the early 2000s.”

Euan’s brand, Akna, is an entirely DIY endeavor, he tells Variety. “Part of it is being protective of your brand and sort of taking control of your creative process. As an immigrant, it is so easy for people to take your creativity and run with it,” he explains.

He is proud of his background, but he understands the risks that come with it, especially in the fashion industry. But the fight to retain his individuality in a sector that hails fast and cheap copycats paid off when Euan was contacted by the show in Season 1 to modify existing pieces for Maddy’s glimmering, Cher-like winter formal skirt-set, which Euan guaranteed would glisten as brightly as the character wearing it on-screen.

Much of Euan’s designs are inspired by the divine feminine, the direct effect of being raised by a single, young mother. “A lot of the business that I conduct and the creative side of my label stems from her, and what I learned from her about entrepreneurship and how she could always make a business out of everything,” he says.

As he was growing up in Yucatán in the 90s and early 2000s, his mother worked as a seamstress. Euan often found himself mesmerized by seeing her work with her hands. As Euan became more interested in fashion, he also began to take notice of how his mom, his aunt and his female cousins would get glammed up before a night on the town — even though Carnival is only celebrated for a couple of days in Mexico, the women in his life dressed like the festival’s showgirls every time they stepped out the door, reveling in their own femininity, sensuality and beauty. Euan would later harness the excitement of getting dolled-up with your girls and showing off to each other in his designs.

When Euan moved to the United States from Mexico in the mid-aughts, he began to base his budding fashion design sensibilities on Southern California style and pop culture, much of which he saw both on the streets and the Internet. He was online as a tween and teen, in awe of John Galliano for Christian Dior, monogrammed bags and bedazzled everything.

Demie herself reached out to Euan for Season 1, as the two knew each other before “Euphoria” because she had modeled some of his designs in the past. (If you’re curious about where those images may be, good luck finding them. Someone else shot the campaign, Euan explains, and seizing creative control of the shoot meant that it never “went big.”) In Season 1, Demie wore two pieces from Euan. “They were existing pieces from my personal collection and designs that were already being sold on my website,” he says. “They reached out because those two looks sort of fit the character and the storyline, but we ended up customizing them a little more for the winter formal scene to really make them ‘for’ Maddy.” That involved adding real ostrich feathers to a jacket and sprinkling Swarovski crystals around the jacket and a veil, along with creating shoes and accessories for the outfit.

“Sam Levinson loved the way that it read on camera, so we had been in talks since the first season about possibly coming back for a second season and being commissioned to come up for looks for that,” Euan says.

His first meeting with crew members tasked with the aesthetics of the show was before COVID hit. Many of Euan’s storyboards for Maddy’s looks ended up molding the character — not entirely, he notes, but just enough to make it that her style was inextricably linked to how she presents herself throughout the series’ plot.

During Season 2, Euan was particularly fascinated with the fact that, as part of the process, they gave him a script of most of the episodes that were connected to Maddy’s storyline. “I had the script for the show maybe two, three months before. Then I was able to really dissect her character and see what personas we were going for, and what feelings we were trying to evoke with her clothes,” Euan says.

Growing up poor and in low-income communities all of his life, as well as not having a “classical” fashion education, Euan knew his sources were limited and that he had to figure out what most of his other contemporaries had learned in ateliers and in the classroom on-the-fly.

“I started hand-painting items because of my brother. My brother is a tattoo artist, so I watched him and would soak up ideas and skills, and would sketch and paint random things,” Euan says. He says he had almost a “feral impulse” to paint on luxury handbags, both for his brand and for the show, because certain purses and backpacks and totes are stamped with brands and price tags that have only ever been attainable for a certain bracket of the country’s elite. “Getting access to these handbags is sort of an indicator that, like, yes, you’ve achieved the American dream,” he says.

As a young adult, Euan was particularly moved by Takashi Murakami’s collaboration with Louis Vuitton, which lasted from the early 2000s to 2015. “I like how he was an Asian artist revolutionizing Louis Vuitton and stamping his own artistry on a luxury handbag, which was a groundbreaking moment in the industry during that decade,” Euan says.

Since Maddy’s cut-out black dress and matching gloves made their debut in the first episode of Season 2, almost a full two years after the fateful winter formal at East Highland High was portrayed on-screen, Akna’s Instagram page has blown up — and suddenly, Euan has had a difficult time keeping up with the high-demand from legions of Maddy wannabes.

“I can’t imagine myself working for another fashion house, because I don’t want anybody to come in and take credit for my work. Without a brick-and-mortar store, the internet helps me keep everything not only me, but also my wife, have worked so hard to build in-house,” Euan says. 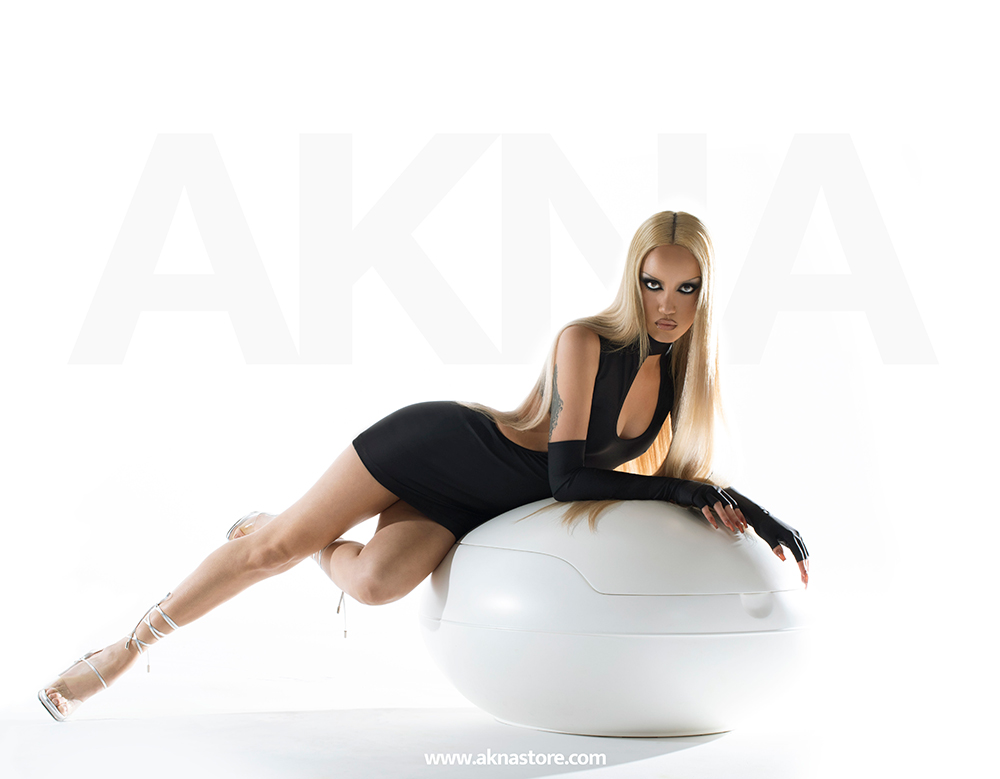 As for Euan’s next steps, he wants to continue curating his brand the way he envisions it and is fueled by the praise fans of his work on “Euphoria” have given him. Euan’s biggest wish for Akna, once it has fully flourished into the identity he is currently cultivating, is for it to be in a department store.

“I think that would be an enormous step as an immigrant artist and designer. It would be a testament of how much we can do as Hispanic immigrants and as Mexican immigrants, and how hard it is to be us and how we are able to overcome by navigating our opportunities and really utilizing the resources at our disposal,” Euan says. “I didn’t go to school for design. I didn’t even finish high school, but you know, it’s all because I didn’t feel like I could do anything back then.”

He feels empowered now as both an immigrant and an artist. The honor of being selected to be the Pygmalion to HBO’s resident Latina baddie — a Galatea in cropped tanks, jet-black hair, big hoops and low-rise distressed bellbottoms — is only the beginning for Euan and his brand.