The last rat seen on Lord Howe Island was sniffed out by a detector dog about 15 months ago not long after a sometimes controversial program to rid the island of an estimated 200,000 of the vermin began. 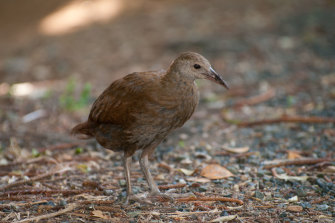 The change in the little island since the rats disappeared has been spectacular, says Terry O’Dwyer, a biologist who worked on the program.

Shoots are now covering sections of the island’s forest floor and its famed Kentia palms are heavy with fruit.

Most significantly there has been a rebound in the numbers of Lord Howe’s flightless woodhen, which was pushed towards extinction by the rats that competed with it for food and even preyed on its eggs and young. 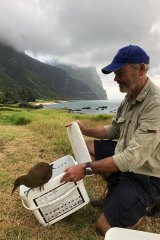 A woodhen being released after the rat eradication.

Fears that the woodhen might succumb to the baiting program that was carried out between June and July in 2019 caused some islanders to campaign against the effort, and prompted scientists to capture and keep them in captivity as the rats were being exterminated.

“We knew they were going to be all right as soon as we released them,” Dr O’Dwyer said. “They started copulating before they were out of sight.”

In a recent survey 440 of the hens were counted, twice the number of the previous count a year earlier.

Feral animals have already caused the extinction of six bird species including the Lord Howe Island fantail, white-eye, gerygone, starling and thrush, as well as 13 invertebrates and two plant species. Since rats scurried ashore from a shipwreck in 1918, they have caused or contributed to the extinction.

The impact of the eradication has stunned some observers.

“It has blown me away,” tour operator Jack Shick said. “I was a huge supporter of [the eradication] but I am in disbelief at what I am seeing. There are more birds, there are berries on the trees and insects are coming back. We are hearing crickets calling again at night. I remember that sound from when I was a kid. 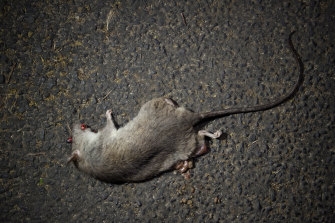 A dead rat on Lord Howe in 2017.Credit:Wolter Peeters

“The thing that excites me is that there is no one alive on Lord Howe who can tell us what it was like before the rats came, so there is a new discovery around every corner.”

It will take longer to assess the impact on larger animals, but, said Dr O’Dwyer, the breeding success rate of petrels on the island has jumped from 2 or 3 per cent to more than 70 per cent.

Eradication programs of invasive species on islands have become a key tool against the global extinction crisis. The Database of Island Invasive Species Eradications has tracked 2000 programs between 1950 and 2019. 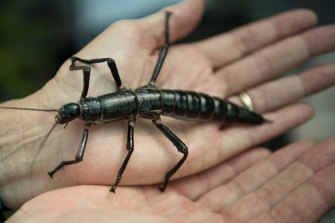 An example of the Lord Howe Island phasmid, the famed giant stick insect, once feared to have been driven to extinction by rodents.Credit:Wolter Peeters

“This is an extraordinary example of a community conservation effort backed by world-leading science,” said NSW Environment Minister Matt Kean, who visited the island last week.

It is expected that the island will be declared rodent free later this year, two years after the baiting was finished.