The little boy who never grows up: Eight-year-old ‘Peter Pan’ who’s still the size of a baby is the only person in the world with his genetic condition – but his parents say he makes every day ‘so special’

The parents of an eight-year-old boy who will always be the size of a baby due to a rare genetic condition, have branded him their ‘miracle’- after doctors predicted he wouldn’t make it past the age of one.

Dylan Myers, from Ongar, Essex, weighs 12kg, is 89cm tall and fits into the clothes of a 12-month-old baby – only growing 1 mm per year.

He sits in a high chair, has a baby car seat, sleeps in a cot, bathes in a baby bath and gets around in a buggy, and his parents regularly have to resuscitate him when he ‘dies in their arms’, due to apnea attacks where he doesn’t breathe for 30 seconds.

The youngster is only able to communicate in baby talk, saying ‘mama’,’ ee’ for daddy, ‘gaga’ for his big sister Scarlett and ‘nana’. He calls his gran ‘bum bum’.

Full-time mum Danielle Myers, 41, and husband Richard, 44, a painter and decorator, first discovered Dylan would have health problems in the twentieth week of her pregnancy when a scan showed his heart was the other way round. 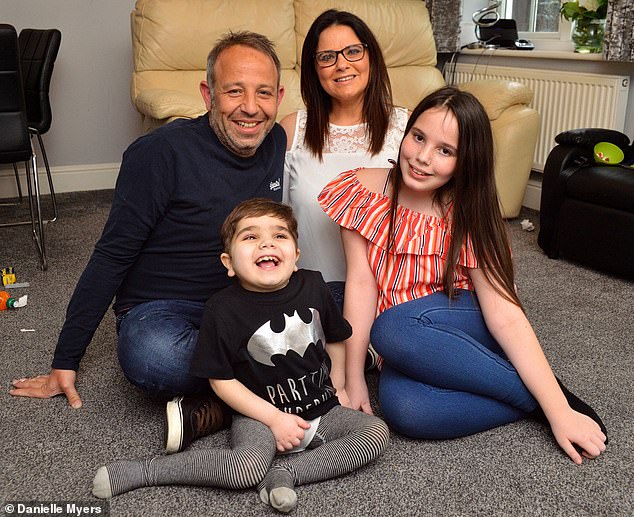 Dylan, from Ongar, Essex, weighs 12kg, is 89cm tall and fits into the clothes of a 12-month-old baby. He is pictured here with his mother Danielle, 41, his father Richard and his sister Scarlett

However Dylan has made some progress, and is now able to crawl and take a few steps, having grown 1.4cm since the age of five.

Sadly the little boy’s backwards heart and a rare genetic condition which doctors have been unable to diagnose beyond calling it SWAN – syndrome without a name mean his life is extremely limited.

Danielle was told he wouldn’t make his first birthday, adding: ‘Yet eight years on, we’re still here. He’s a miracle, doctors thought he would not survive beyond five months.

‘He has had about 50 operations and he is on 22 different medications a day, including chemotherapy injections which I give to him.’ 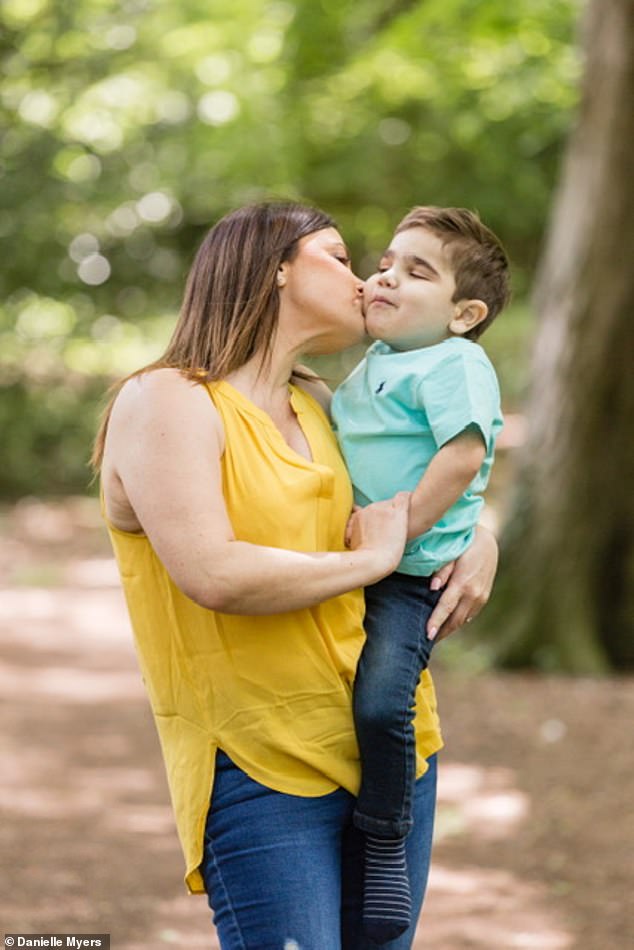 Dylan, pictured with his mother, sits in a baby high seat, has a baby car seat, sleeps in a cot, baths in a baby bath and rides around in a buggy

Still with no diagnosis for his ‘Peter Pan’ condition, Dylan now relies on regular chemotherapy sessions and daily steroids at home, where Richard and sister Scarlett, 13, also help care for him.

‘To be told your baby will have major health problems was like the end of the world,’ she said.

‘Little did we know that it was actually the beginning. Doctors have now diagnosed 21 different conditions he suffers from but have been unable to give it a name. We’d love to find other families in the world with children similar to Dylan.’

She added: ‘He was born by Caesarean at 36-and-a-half weeks, and initially he didn’t need any special care at all.

‘He was this perfect, tiny, little thing — but he cried a lot and didn’t feed well. Then, when he reached eight weeks, he had his first seizure. That was followed by ear infections and throat infections, and horrendous apnea (temporary cessation of breathing) attacks when he would stop breathing. 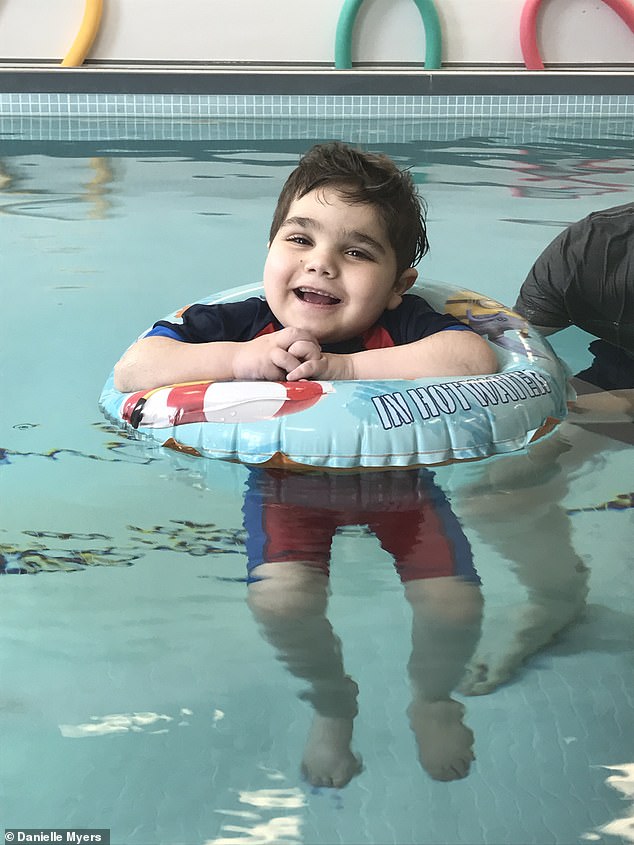 Dylan’s speech is baby babble and the only sounds he makes is ‘mama’,’ ee’ for daddy, ‘gaga’ for his big sister Scarlett and ‘nana’

‘He was finally rushed to Great Ormond Street Hospital (GOSH) after my mum noticed that one of his legs wasn’t developing properly, and he was red-hot to the touch. Blue flashing lights carried us there in the middle of the night, and we’ve been looked after by them ever since.’

Dylan was fitted with a Hickman line to feed drugs into his system quickly, but despite several investigations, doctors were unable to give an exact diagnosis.

He was discharged, but weeks later, in January 2011, aged four months, he first ‘died’ in his mother’s arms.

‘I was at my Dad’s office in Loughton and Dylan turned stiff and blue, and stopped breathing in my arms.’ says Mrs Myers. ‘I was hysterical, I didn’t think he was coming back. It was the longest 30 seconds of my life.’

Although he spluttered back to life, Dylan still has terrible apnoea attacks and his parents are regularly terrified when he stops breathing. 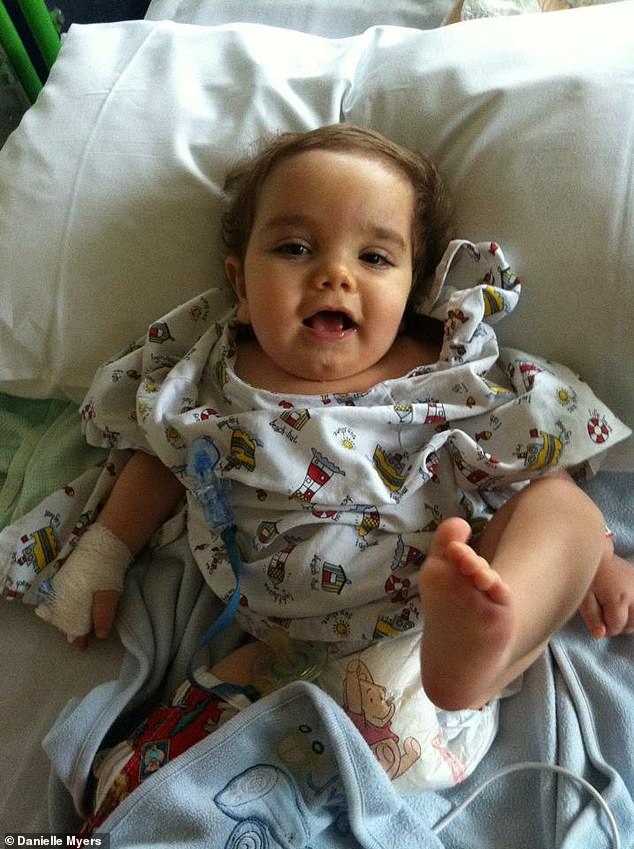 Mrs Myers says: ‘He stops breathing day or night, with no prior warning, and it can happen up to nine times a day. No one knows why it happens. He’ll go blue and stiff, and he needs resuscitating and then oxygen. This is the most upsetting part of Dylan’s condition because he literally dies in our arms, but he has got some fight to come back.’

What does SWAN mean?

SWAN stands for ‘syndromes without a name’. It is not a diagnosis, but a term used when a child or young adult is believed to have a genetic condition and testing has failed to identify its genetic cause.

[xhead] What are syndromes without a name?

Some children affected by a syndrome without a name might be described as having global developmental delay or failure to thrive. They might have learning disabilities and/or physical disabilities.

They can sometimes have complex medical needs.

Some symptoms children might be identified as having include:

• Hypermobility or hypomobility (problems with joints)

• Feeding difficulties, such as problems with swallowing – many children may be tube fed

His poor immune system means, although he should be in year four at school, he learns through play at home. No-one can explain why he grows less than a mm a year.

‘He is under 15 different teams at Great Ormond Street Hospital,’ Mrs Myers says.

‘Not one can make him better. They all just manage his care. He is literally serviced from his eyes to his toes. When his size is measured, nurses pop him on the baby measuring machine.

‘He fits into size 9 to 12 months trousers because he is so tiny from the waist down and wears age 18 months to two years on the top half where he is more developed from dragging himself around.

‘I now give him 20ml doses of water via a syringe after doctors discovered he was riddled with kidney stones at Christmas.

‘He used to drink fruit shoots but it became so important to keep him hydrated, that he now only takes water through a syringe. He’s also been diagnosed with ADHD and is undergoing tests for autism too.

‘Dylan is so lucky to have his care coordinated by the SWAN Nurse at GOSH as being under so many teams can be hard for me to manage as a mum.

‘He never sleeps for more than a few minutes at a time so I haven’t slept properly for almost nine years. Somehow I’ve got used to surviving on little sleep.

‘Dylan is on so many medications from morphine to manage his pain, oxygen to help him when he stops breathing to the daily injections and infusions he has to give him quality of life.

‘In the back of your mind you know he won’t be here forever. 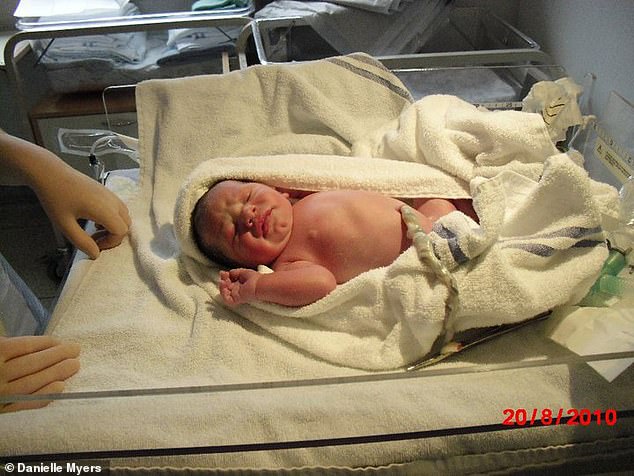 ‘But we live and hope and dream. Although he is non-verbal, the way he communicates with me is beautiful.

‘I can always tell what he wants or needs and when something is wrong just by a flash of his eyes, a hand signal or a noise. He makes my day so special.

‘We hope by telling his story, there may be another family or medical expert out there who can help us. We live every day as it comes – we love him to bits.’

His parents still hope for a diagnosis, but say it will now be most helpful for parents of other children with similar conditions.

She regularly provides support to other parents through a group called Swan UK and has arranged fundraisers where celebrities such as Katie Piper and Towie stars have shown up.

‘I think it is a very isolating world when you are told your child is undiagnosed, it is like the loss of a child you were planning to have – there is no path to follow, nobody can answer you.

Now, the family has set up a trust in Dylan’s name to provide vital healthcare and a specialised room for him to live in at home.