Echoes of another war Russia was always doomed to lose 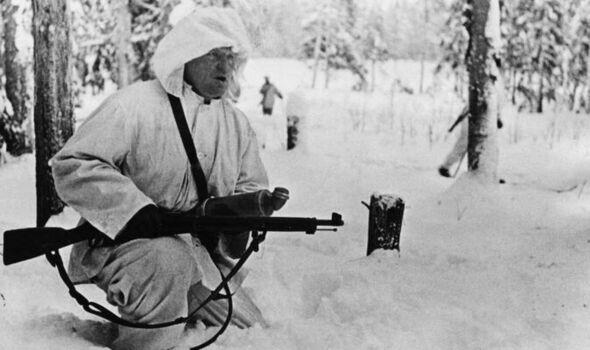 SOLDIERS and civilians of an innocent country fighting a superpower invader for every inch of ground. A watching world that is quick to condemn but slower to help. This is a vision of Ukraine today. But it was also Finland during the 105-day Winter War which began on November 30, 1939.

What’s more, the adversary Ukraine battles now is the same one the Finns fought 80 years ago: Russia, then at the heart of the Soviet Union.

For Finns there has always been a fear that the Russian bear will return. Since the Second World War, Finland – population just 5.5 million – has been wary of antagonising its neighbour, with which it shares an 840 mile-long border.

However, things are shifting rapidly. This week parliamentarians have been debating calls for a referendum on a Finnish application to join Nato after more than 50,000

The debate over potential Nato membership comes despite Russia threatening the country with “military and political consequences” if it joins the Western military alliance.

Yet given the historical echoes between their own conflict and that being played out today in Ukraine, many Finns feel they have no choice but to seek the security they hope Nato membership would bring.

Today it is Vladimir Putin menacing them from the Kremlin. In 1939, it was Comrade Stalin. The two autocrats share many similarities, not least a casual willingness to shed the blood of their countrymen and a gross underestimation of the resolve of the countries they invaded to resist by any means possible.

Amongst those means – then as now – is the Molotov cocktail. The

Finns weren’t the first to use petrol bombs, but they did coin the name for these improvised weapons, which have become associated with David taking the fight to Goliath.

During the Winter War – which saw Russia pour hundreds of thousands of men across the border into Finland – the aggressors used cluster bombs, which the Finns bitterly termed “Molotov breadbaskets” in reference to the Soviet foreign minister, Vyacheslav Molotov, who claimed the only missiles being dropped on Finland were food parcels.

The Finns demonstrated their “gratitude” with a return delivery of their own, half-litre bottles filled with a flammable mixture made up variously of alcohol, petrol, kerosene and tar – Molotov cocktails, a fiery drink to go with the food.

Finnish soldiers used them predominantly against Soviet tanks, targeting the most vulnerable parts of the machines: open hatches, engine compartments, air vents. Effectiveness was greatly increased if the user was brave enough to get within a few metres of the tank so the weapon could be thrown with pinpoint accuracy.

Despite being vastly outnumbered in men and equipment, what the Finns did have on their side – together with ingenious if rudimentary weaponry – was the unforgiving terrain and weather.

Surrounded by endless tracts of barely penetrable pine forests, the Russian armour was obliged to keep to the few narrow tracks and roads available.

Finnish troops could sneak out of the trees, deliver their packages and be back amongst the snowy woodland within moments. The long dark subarctic nights further aided the Finns’ ability to move ghostlike amongst the enemy and apparently strike at will. By picking off vehicles at the front and back of the columns, the Finns were able to pin down the enemy whom they could then pick off in their own time.

The attrition rate amongst the Soviets was only worsened by the freezing temperatures, poor equipment and lack of supplies.

Such was the success of the Molotov cocktail that Alko, the state-owned liquor company in Finland, started mass producing them. Today, in Ukraine, Molotov cocktails are also being made in large volumes, not in factories but by cottage industries.

On street corners and in town and village squares, men and women are improvising, making the bombs out of anything that sticks and lights and burns: cooking oil, baking soda, polystyrene, rubber, petrol where it is available. Videos on social media show them being deployed with frightening effect.

It is a grim reminder that for all the talk of surgical strikes carried out by sky-high pilotless drones, warfare today remains remarkably similar to that of a century ago: often face to face, sometimes hand to hand.

In Ukraine, the government has called up reservists and volunteers to bolster its forces. It has invited foreigners with a conscience to come and fight to save not just the country but democracy itself.

In Finland, the situation was similar. Few foreign recruits reached the country, although more than 9,500 Swedes fought the Russians, the neutral country furious their neighbour had been attacked, but Finnish reservists were increasingly drafted into fill the gaps.

My maternal grandfather Eemil Pirhonen was one. Aged 37 when he went to war, he had been a carpenter in civilian life, married with two young children, living a quiet life near Sortavala, a town on the shore of Lake Ladoga, the largest such stretch of water in Europe.

Eemil, and others like him, were sent to fight the Soviets on the River Kollaa, a waterway just a few metres wide but which has come to have vast symbolic importance to the Finnish nation.

Early in the war, the commander there was asked by his superiors: “Will Kollaa hold?”

The answer from Captain Aarne Juutilainen, the Terror of Morocco – so-called because of his prior service in the French Foreign Legion – was unequivocal: “Kollaa will hold, unless we are told to run.”

And Kollaa did hold, just, thanks to people like Juutilainen; and Simo Hayha, probably the most successful sniper of all time with 542 confirmed kills to his name; and my grandfather, Corporal Eemil Pirhonen.

Eemil and his regiment, JR 69, were at Kollaa in the last days of the Winter War when the Soviets massed for the offensive they thought would finally break the Finnish ranks.

On March 2, 1940, up to 40,000 Soviet shells rained down on the Finnish positions. The Finnish artillery had guns and ammunition to fire back a mere 1,000 rounds. It was the prelude to almost two weeks of intense fighting, which saw the Finnish lines all but buckle.

Relief came on March 13 when a ceasefire was declared following Finland’s signing of the Moscow Peace Treaty, the terms of which meant it had to cede a tenth of its territory to the Soviets. But there was also a human cost and it was paid by both sides.

The Soviets are believed to have lost around 170,000 soldiers.

And 25,000 Finnish troops and civilians died, Eemil Pirhonen among them. His widow Josefina – my grandmother – received a letter a month after the peace saying that her husband had been killed on March 11 just before the ceasefire and that “unfortunately the body was left on the Russian side but there are hopes that it can be retrieved”.Those hopes were dashed.

Even today it is unclear what happened to Eemil’s body. Certainly, his widow and children were tormented by the uncertainty.

The lack of a grave to be able to visit coupled with the loss of his home and part of his homeland led his son, my uncle, to an early death. Later my mother came to England to build a new life.

A few years ago, my sister Helen and I travelled to Sortavala in what is now Russia. It was the first trip of several, we hoped, in our own investigations into Eemil’s fate.

But then Covid struck. Now Putin has struck. When, if, we get the chance to visit Russia again is anyone’s guess. What has always kept Finns going through the direst times is something they call “Sisu”, a cocktail, you might say, of steely grit, tenacity and determination. Eemil and his colleagues displayed it at Kollaa. It is held up as a national trait.

Yet what the Russian invasion of Ukraine has shown is that Sisu is not unique to the Finns but can be found amongst other peoples who face existential threats from bullying aggressors. Such stoicism and bloody mindedness can be worth any number of tanks and artillery pieces.

For the Russians, the Winter War was a brutal lesson in humility, one that Putin should have been well aware of. He is being retaught it in Ukraine.