Don’t tell veterans ‘thank you for your service’: Ministerial memo

Public servants at the Department of Veterans’ Affairs have been ordered to stop using the term “thank you for your service”, a phrase that has grown in popularity as a public sign of gratitude towards men and women who have served in the armed forces.

The term, which originated in the United States, has become widespread following the events of September 11 and the Afghanistan and Iraq conflicts. It is routinely used towards American ex-servicemen and women, including in announcements on domestic flights. 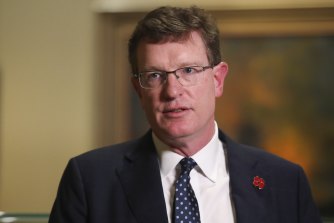 Minister for Veterans’ Affairs and Defence Personnel Andrew Gee doesn’t support the use of the phrase “thank you for your service” for veterans.Credit:Alex Ellinghausen

It was elevated in Australia by Prime Minister Scott Morrison three years ago when he began regularly using the phrase at public events, speeches and ceremonies, using it alongside recognition of trad­itional owners of the land and Indigenous leaders.

The term has also been used as a title for several government-sponsored public exhibitions to Australian servicemen and women, including during 75th anniversary of the end of the Second World War last year.

In a memo circulated within the department shortly after Veterans’ Affairs Minister Andrew Gee was appointed to the portfolio in August, staff were informed that he no longer wanted the phrase used in press releases, websites or social media posts. 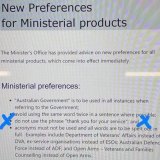 A ministerial memo sent within the Veterans’ Affairs Department banning the use of the phrase “thank you for your service”.

“Do not use the phrase ‘thank you for your service’,” the memo seen by this masthead says, along with instructions to use ‘the Australian government’ instead of ‘the Morrison government’ and to spell out titles in full. That included spelling out ‘ex-service organisation’ rather than using acronyms like ESOs. The ministerial preferences were to “come into effect immediately”, it said.

A spokesman for Mr Gee, who is on medical leave, said neither the minister nor his office “saw or approved” the internal memo before it was circulated. But the spokesman’s statement did not dispute he no longer wanted it used.

“Minister Gee makes no apologies for taking a personalised approach in thanking all our service men and women, our veterans and their families who have given so much for our nation, including the use of language appropriate to each individual situation,” it said.

The spokesman said it was “astounding” that the internal machinations of the department were being used as a distraction during the first week of the Royal Commission into Defence and Veteran Suicide.

While ex-service­ support groups warmly welcomed the elevation of veterans’ awareness to the national agenda at the time, the term has been criticised in some parts of the veterans’ community as “a crass-to-our-ears recent American custom”.

A government source said Mr Morrison loved the phrase and intended to keep using it. 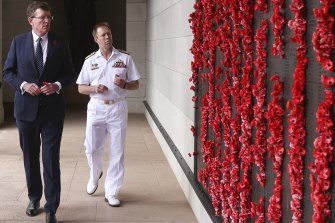 Mr Gee places poppies on the Roll of Honour during an event to mark the 80th anniversary of the sinking of the HMAS Sydney.Credit:Alex Ellinghausen

Several Coalition MPs have interpreted Mr Gee’s deliberate decision to stop using the term as a swipe at his predecessor as minister, Darren Chester.

In his departing message to veteran’s in August, Mr Chester told federal Parliament he started using the phrase at public events three years ago “not to embarrass you, but to remind those of us who have never served about the risks you take on our behalf”.

Relations between the pair have been strained since Mr Gee supported Nationals leader Barnaby Joyce in his successful challenge against Michael McCormack in July.

Mr Chester urged his predecessor to improve his performance in a speech to Parliament on Tuesday, saying the feedback he’d received from stakeholders in recent months was “disappointing”.