Doctor says perimenopause was like having 'demon in her head'

A doctor said that perimenopause was like having a ‘demon in her head telling her to shout’ as she revealed she was incorrectly refused HRT and offered antidepressants instead.

Despite her profession, Dr Louise Newson had no idea that she was going through perimenopause in her early 40s – suffering with a low mood, fatigue, irritability and migraines.

When she eventually discovered what the symptoms were, she asked her GP to undergo hormone replacement therapy (HRT) but was refused and offered other medication to help her low moods.

Appearing on Lorraine from her home in Stratford-upon-Avon, the mother said that she wants to stop ‘misinformation’ about menopause, insisting that even women who are in their 20s and 30s are going through perimenopause. 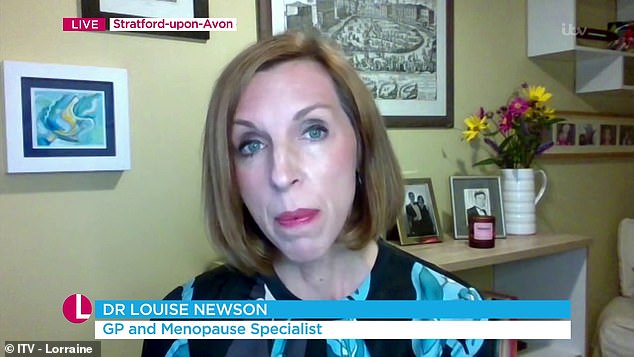 ‘It’s completely ironic because I was developing my menopause website,’ she said. ‘I was 45 and I was starting to feel very tired, very irritable and cross with my family.

‘It was like I had a demon in my head telling me I could shout and it didn’t matter, I was also getting migraines and waking up in the night.’

The mother, who penned Preparing for the Perimenopause and Menopause, put her symptoms down to ‘working too hard’ but eventually realised she was going through the perimenopause and was keen to start treatment.

‘I knew that HRT provides more benefits than risks’, she said. 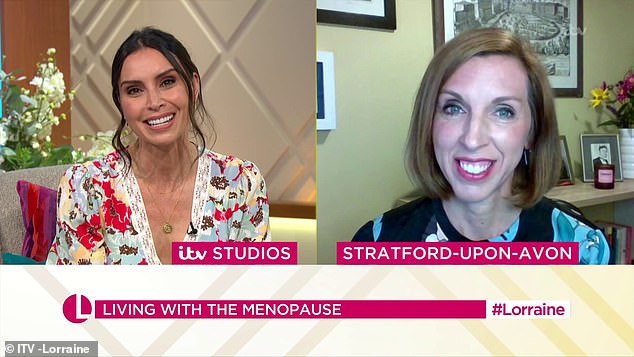 She told host Christine Lampard on to say that women have been ‘turned away’ from HRT for years because of ‘misinformation’ and that treatment is an effective way of ‘reducing the risk of disease’. 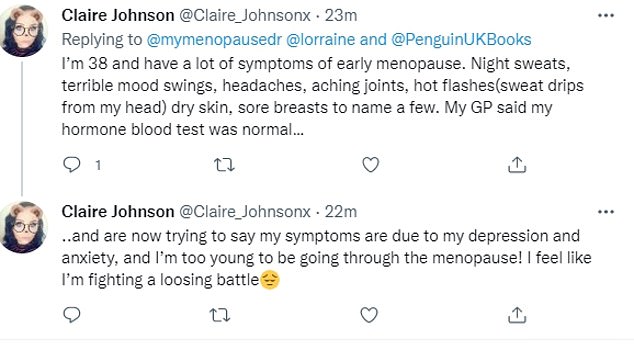 Viewers quickly took to Twitter to praise the doctor for her candid interview, sharing their own stories of menopause

‘I went to my local GP who told me incorrectly that he couldn’t give me HRT because it was dangerous and offered me anti-depressants which might help my low mood. So I had to go and seek help elsewhere.’

Perimenopause, or menopause transition, begins several years before menopause. It’s the time when the ovaries gradually begin to make less estrogen. It usually starts in women’s 40s, but can start in their 30s or even earlier.

Perimenopause lasts up until menopause, the point when the ovaries stop releasing eggs. In the last 1 to 2 years of perimenopause, this drop in estrogen speeds up. At this stage, many women have menopause symptoms.

The average length of perimenopause is 4 years, but for some women this stage may last only a few months or continue for 10 years. Perimenopause ends when women have gone 12 months without having their period.

She went on to explain that several of her patients are young women, including one 14-year-old who only had one natural period before she started going through perimenopause.

Explaining that there’s no test for perimenopause, she said: ‘It’s about the woman trying to understand, to track her period, to monitor symptoms and to learn that the perimenopause can occur a decade before the menopause.

‘The average age in the UK is 51, so most women in their 40s will be perimenopausal. But one in 100 women under 40 have an early menopause.’

She went on to say that women have been ‘turned away’ from HRT for years because of ‘misinformation’ and that treatment is an effective way of ‘reducing the risk of disease’.

‘There has been so much misinformation for years’, she said. ‘People have thought of the menopause as something that causes a few hot flushes and we can get through it.

‘But when we understand it is a hormone deficiency that has health risks that affects all women directly and men indirectly and also there is treatment available.

‘We’ve been turned away from HRT for the last 20 years because people have been given misinformation. If there’s no treatment for something we just sort of thought well we’ll get through it.

‘But actually there is treatment, there’s evidence based treatment. There’s ways of working out what is going on and reducing the risk of disease. We have to change the narrative to improve women’s future health.’