A disabled woman has caught COVID-19 from a support worker after the National Disability Insurance Agency refused to allow her sister to provide care instead during the pandemic.

Sheree Driver told the disability royal commission on Wednesday that her sister's mental state had rapidly declined after being without care for almost a month as a result of the decision. 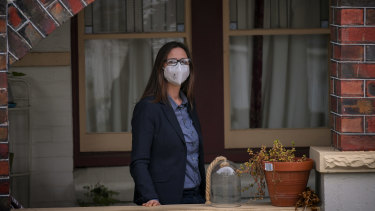 Ms Driver, who is also a professional support worker, said she first applied to provide temporary care for her sister, who suffers from a psycho-social condition and can't be identified, on July 20, due to fears she was vulnerable to catching the virus.

They requested the support worker be tested and she received a negative test result on July 22. Ms Driver's application was denied on July 27.

Ms Driver said her sister, who lived alone in Melbourne's inner north and was aged in her 40s, never would have caught the virus if the NDIA had approved her application.

"I feel frustrated. This could have all been avoided," Ms Driver said after giving evidence to the royal commission.

Ms Driver broke down during the hearing, describing their close relationship.

"I felt totally powerless. Her needs are so high," she later said. "I couldn't in any way comfort her or be there for her."

Ms Driver, who addressed the Sydney-based royal commission from her Melbourne home, said a second application to care for her sister was rejected in early August. The NDIA said the decision couldn't be reviewed.

"I feel mortified," she said. "The first time I was in shock that they said no, the second time I couldn't even deal with it."

An NDIA spokesman said the agency had a range of measures in place to ensure the wellbeing of participants during the pandemic.

“While we recognise the challenges of the coronavirus, funding of family members to provide paid supports is not agreed except under very exceptional circumstances – usually only where all other suitable support options have been exhausted,” he said.

Ms Driver said she understood the reasons why the NDIA didn't allow family members to provide support work, however, she said flexibility should be shown in a crisis.

Her sister has been without formal care since July 24 while her support worker, with whom she had a close bond, has been in intensive care. 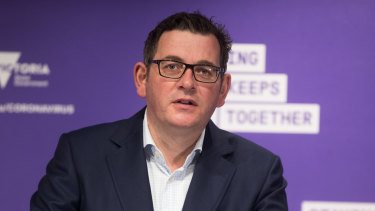 Nineteen of those are in transfer facilities moving to the NDIS and 60 are in the NDIS.

Sixty of the cases are staff and 19 are residents.

The Victorian government has urged the Commonwealth to be a part of its Disability Rapid Response Group – a model similar to the joint aged-care taskforce – to address issues around infection control.

He said there was no update to that on Wednesday.

"That'll be one of the things I talk to the PM about today," he said.

Seventeen cases have been connected to Aruma Disability Services. Five staff and two clients from Aruma still have COVID-19.

The cases are all in Melbourne, except for one staff member in Ballarat who began self-isolating after a family member tested positive.

Get our Coronavirus Update newsletter for the day’s crucial developments and the numbers you need to know. Sign up to The Sydney Morning Herald’s newsletter here and The Age’s here.