‘Difficult to renovate’: Opera’s struggle to move with the times

Opera Australia artistic director Lyndon Terracini agrees there should be a conversation about how women are represented in art but said it was essential for an opera company to present the great works because they were popular and most people "hated" the music in contemporary works.

Mr Terrancini, who has lead Opera Australia for nine years, said works by male composers such as Mozart and Bizet were important works that resonated with audiences in Australia. Opera Australia is in the midst of showing  Gaetano Donizetti's Anna Bolena and Giacomo Puccini's Madama Butterfly. 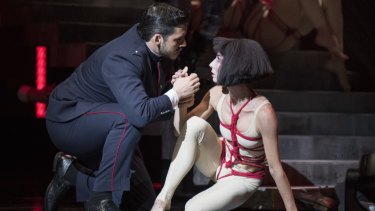 Opera is under the microscope for the way women are portrayed on stage as well as the treatment of women in the industry generally.Credit:Wolter Peeters

"It would be irresponsible of us to decide that some of the major works in the Western canon shouldn't be seen," he said.

"We program the finest creations in the history of Western art and a large number of people come to see those productions, which suggests the public wants to see them.

"If the public want to decide they don’t want to see these pieces, that is another discussion."

Mr Terracini was responding to a call from Australian composers, directors, musicians, and vocalists, who have called for a ''revolution'' to remove what they describe as gender bias, sexism, and dramatised acts of violence against women in opera. 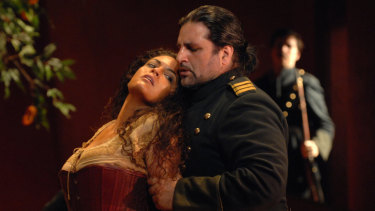 Bizet’s Carmen ends with the murder of the title female role.

The "call to action" co-authored by Sally Blackwood, Liza Lim, Peggy Polias and Bree van Reyk urged "respect" for "creators who are female, non-binary and from diverse cultural backgrounds" and ask for "safe inclusive spaces for people with diverse voices and abilities to set the agenda".

Operas written in the 17th, 18th and 19th centuries are products of their time with the portrayal of women sometimes limited to that of a tragic heroine.

"The drama of most opera is predicated by the story and … the music is so fundamentally predicated on those dramatic preconceptions, it is difficult to renovate them to a contemporary sensibility," he said. 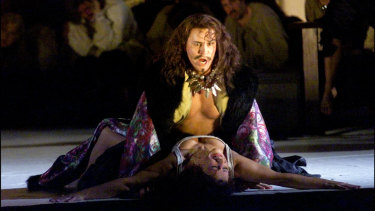 Benjamin Britten’s The Rape of Lucretia is an example of violence against women depicted on stage.Credit:Photographic

Mr Williams said one way to create a greater range of female roles was to commission more contemporary works and trust that the audience will gravitate to them.

Mr Terracini rejected the assertion that bias and sexism was only an "opera problem", arguing the discussion should involve all art forms.

"If we want to seriously examine the cultural history of Western art, let’s examine everything that constitutes the making of a civilisation based on the history of art," he said.

"If people are serious about doing something like this, it would need to involve an examination of painting, sculpture, ballet, everything.

"Singling out the operatic form, I don't think that is a discussion that is based on a genuine overview of Western culture."

Terracini said most audiences "hate the music" in contemporary operas, which made it challenging to get audiences to buy tickets. He said that hasn't stopped Opera Australia, however, from commissioning modern works.

The most recent completely new work commissioned by Opera Australia was The Rabbits by Kate Miller-Heidke. It sold 25,370 tickets in 2015 and 2016 for a total box office taking of $642,245. Conversely, Richard Wagner's the Ring cycle at Melbourne Arts Centre was seen by more than 35,000 people and brought in more than $8 million for the company.

Later this month they will present Whitley, a completely original new opera by Elena Kats-Chernin.

Former Opera Queensland artistic director Lindy Hume, who has directed major operas including Carmen and Don Giovanni all over the world, says the key is to engage more female creatives who can view such works through a feminist prism.

Her 2018 production of Don Giovanni, for which she is nominated for a Helpmann Award, treats the title role in a non-traditional sense by portraying him as a violent rapist rather than a charming cad.

"I’m not sure you can do it with every single opera, but what you can do it look at each of the operas and say instead of Don Giovanni being a great guy who has lots of girlfriends or many conquests, you can name it that he is a psychopath who serially rapes women; it is about calling it out instead of dressing it up as something to be admired," she said.

"If you could just get the ratio of women creatives up for a start to something like parity, this would a) be the easiest thing to do and b) begin a whole different conversation about what this artform looks like."