Depp and Moss: inside the most notorious love affair of the 90s

In the mid-90s, there were few more iconic couples than Kate Moss and Johnny Depp. And even fewer possessed more mystery. Admittedly, they did give interviews but in a time before celebrities’ endless tedious Instagram posts and pithy opinions on Twitter, aside from occasional magazine articles and television appearances (and frothy reports of hotel-based debauchery), their lives as individuals and one of the decade’s hottest couples were heavily shrouded. 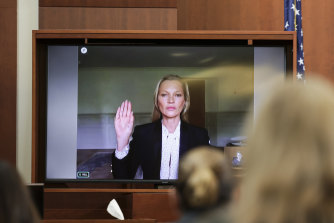 But today, for the first time in decades, that mist has lifted. As part of the ongoing defamation trial where Depp is suing his ex-wife Amber Heard, Kate Moss has testified on Depp’s behalf, via video link, in a Virginian court. For celebrity fans, this is verging on remarkable in various ways: firstly, Moss is so famously protective of her public appearances that, despite her global fame, not many people even know what her voice sounds like. Secondly, she’s gone on record explaining that it was Depp, all those years ago, that advised her to keep her own counsel, which has no doubt informed her standard silence even throughout her wilder, partying years.

And yet here we are: Moss has just spoken about her former beau on the biggest stage of all – an increasingly gruesome Hollywood marital dogfight, which is being broadcast on the world stage.

It’s all come about because, while describing an alleged argument she had with Johnny Depp at the top of a staircase, Heard recently appeared to score an own goal by claiming that Depp had once pushed Kate Moss down the stairs. Depp and his legal team looked delighted; the name-check gave them legal permission to call Kate Moss to give evidence. The presumption was that Moss’s evidence would work in Depp’s favour and it looks like this may prove correct: “No, he never pushed me, kicked me or pushed me down any stairs,” was Moss’s reply to a question from Depp’s legal team.

She also used her moment on camera to describe an incident when she fell down the stairs while on holiday but it was in fact Depp who came to her rescue and secured her medical attention. Perhaps not surprisingly, Heard’s legal team chose not to cross examine. 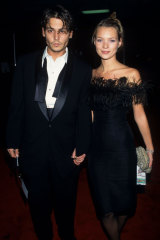 Even today, the intrigue around Kate and Johnny refuses to dissipate – largely because they released only snippets of tantalising details to the public.Credit:Getty Images

Despite the pair being an item two decades ago, the intrigue around Kate and Johnny refuses to dissipate – largely because they released only snippets of tantalising details to the public. For example, back to 1995, when Kate Moss and Johnny Depp were the gilded “It” couple of the Nineties (with Liam Gallagher and Patsy Kensit as silver medallists) and C4’s The Big Breakfast presenter, Gaby Roslin – in full Big Sister mode – asked a kittenish Kate Moss: “What sort of romantic things does Johnny Depp do?”

“Surprise birthday parties and, like, y’know, surprise presents….” The Croydon-born supermodel scrunches up her gorgeous little nose and with perfect comic timing reveals, “he gave me a diamond necklace that he had hidden down the crack of his a—…”

Depp and Moss were an item between 1994 and ’97, leaving a tabloid paper trail in their wake. When they met, Depp was 31, cool and beautiful, indie and edgy – fresh from making Ed Wood and still riding high on the commercial success of Edward Scissorhands and the critical success of What’s Eating Gilbert Grape?. He had split up with Winona Ryder (in 1993) and retained his rock ‘n’ roll cred (he had been a musician before he was an actor) with his co-ownership of The Viper Room nightclub on Sunset Strip; the place where his friend River Phoenix had died of an overdose in 1993.

Kate Moss, meanwhile, was just 20 and a fully-fledged supermodel, whose debut on the front cover of The Face magazine in July 1990 – aged just 15, wearing a native American headdress, freckles and cheeky grin, photographed by her friend Corinne Day – instantly made her the poster girl for Gen X – the “grunge” generation; by the time of her Big Breakfast appearance, Moss had just appeared in a famously sexy Calvin Klein ad alongside Mark Wahlberg.

They were introduced in 1994 at the-then New York East Village hotspot Café Tabac (I had a 30th birthday dinner there myself in ’94; no sign of Johnny and Kate that night, sadly) by former Vanity Fair columnist George Wayne. “Johnny was having dinner and Kate walked in with Naomi [Campbell] and I grabbed her and made the introduction,” he said. Kate is on the record saying she knew they’d be a couple the moment they met.

Famously comfortable with fizzing PDAs (Public Displays of Affection), according to People magazine Depp and Moss couldn’t “keep their hands, lips, mouths, or legs off each other” as they blazed their cool and charismatic trail, papped at every turn. But it was the 90s (during which I was editing the men’s glossy magazine Arena) and without social media, celebrities were still largely unknowable – “untouchables” – unless they granted interviews. And Depp and Moss granted a mere handful.

One such interview was in 1997, when Hello magazine asked Depp how he would describe Kate: “Very smart and quick-witted. She works hard, she’s got a wicked sense of humour… She’s much more level-headed and together than I am.” Fifteen years later, in 2012 – a very different social landscape – Kate, who had become famously reticent about doing interviews, told Vanity Fair: “I was lucky to be with Johnny. He taught me a lot about fame, told me ‘never complain, never explain’. That’s why I don’t use Twitter… I don’t want people to know what is true all the time, and that’s what keeps the mystery.”

If any proof of Depp’s lack of “level-headed”-ness was needed, in September 1994 police were called to the Mark Hotel in Manhattan where he was arrested for “criminal mischief” in their trashed room, while (according to police reports) being “in a state of possible intoxication”. Neither were injured and the charges were subsequently thrown out by the judge, though Johnny paid $9,767.12 in damages. Then, Kate was subsequently accused of trashing her own room at the Hotel dû Cap during the 1998 Cannes Film Festival and was (allegedly) banned by the hotel; an incident thought to have been triggered after she and Johnny had crossed paths at the Festival.

“It was the 90s and without social media, celebrities were still largely unknowable – “untouchables” – unless they granted interviews.”

Nonetheless, despite the inevitable fender-benders in their celebrity fast-lane, Kate is on the record having spent “years” crying over the end of their relationship: “There’s nobody that’s ever really been able to take care of me. Johnny did for a bit.” She told Vanity Fair in 2012, “I really lost that gauge of somebody I could trust. Nightmare…”

For his part, Depp blamed himself: “I have been so stupid because we had so much going for our relationship. I’m the one who has to take responsibility for what happened – I was difficult to get on with, I let my work get in the way and I didn’t give her the attention I should have done,” he told Hello! magazine. “Trust me, I’m a total moron at times.”

Though they split publicly in 1997, a year later the pair were alleged to have filled a bath at the Portobello Hotel (the hotel describing the guests only as “an American actor and English model”) with champagne, before going out for dinner, after which a maid went to turn down the covers, pulled the plug and dispatched 36 bottles of Mumm. Apparently, the then recently un-coupled couple laughed the incident off and didn’t ask for a refill. “They saw the funny side,” said a hotel spokesperson. However, Kate has always denied the story – albeit via a third party; “It was not Kate, it’s not her style. She doesn’t use the hotel anymore.” 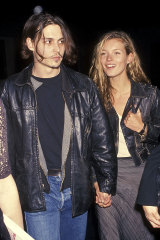 Any post-break-up hook-ups are, of course, speculative: Depp was with Vanessa Paradis by 1998. Kate, now 48, is a mother to her mini-me model daughter Lila Grace (whose father is the former publisher of Dazed and Confused magazine, Jefferson Hack. She subsequently married Jamie Hince, lead singer of The Kills, in 2011, divorcing in 2016). Depp, 58, is father to Lily-Rose, 22 and Jack, 20, with ex-partner (and Kate-a-like) Vanessa Paradis who has also been supportive of her ex, saying in 2020: “I have known Johnny for 25 years… Through all these years I’ve known Johnny to be a kind, attentive, generous and non-violent person and father…”

Moss has never accused Depp of domestic violence and never spoken out about Heard, however, it is thought she has reached out to Depp during the trial and has been fully supportive. While Depp is thought to be currently flying solo, Kate is in a relationship with German-born photographer Count Nikolai von Bismarck. Nonetheless, nearly 30 years on from their era-defining It-Couple peak, it would seem that – especially for the generation who grew up keeping a very close eye on them both – The Johnny and Kate show is still far from over.

Make the most of your health, relationships, fitness and nutrition with our Live Well newsletter. Get it in your inbox every Monday.

Most Viewed in Lifestyle