Marks & Spencer has been accused of irresponsible advertising after posting a video of Fred Sirieix which suggested that alcohol can help him cope with household chores.

The First Dates host, 50, and M&S ‘wine ambassador’ is seen in his dressing gown sorting through his dirty washing and discovering a bottle of wine in the laundry basket.

‘Here’s a little laundry hack I’ve been doing for years,’ a voiceover says. ‘Trust me. It helps.’

The wine promotion was shared on both Sirieix and M&S’s Instagram accounts, which have a combined following of 2.7million.

It was condemned by Sober Dave, a podcast host and recovered alcoholic whose celebrity followers include Gaby Roslin and Susannah Constantine.

‘This is NOT OKAY!’ he wrote, suggesting the video could be ‘triggering’ for those living with an abusive alcoholic, children who have alcoholic parents or for those who are trying to give up drink. 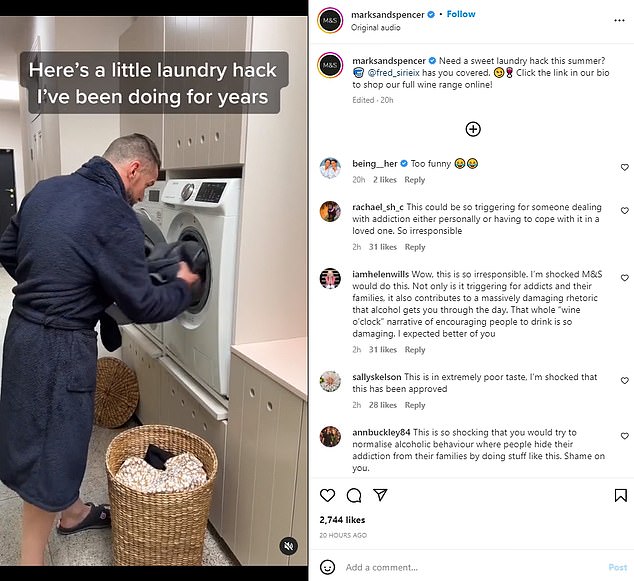 ‘Here’s a little laundry hack I’ve been doing for years’, says Fred Sirieix, 50, as he discovers bottle of wine while sorting dirty laundry in an M&S advert, which some critics branded ‘triggering’

One person commented: ‘This is so shocking that you would try to normalise alcoholic behaviour where people hide their addiction from their families by doing stuff like this.’

Both parties removed the ad hours after it was first published.

A spokesman for M&S said: ‘We completely recognise that we missed the mark on this occasion.

‘We’re really sorry for any upset we have caused.’

Only last week Crown Paints was accused of misogyny over an advertisement that suggested a woman character in it had been unfaithful.

* One of the world’s largest wine producers says Britons are drinking their way through the living standards squeeze. Treasury Wine Estate, owner of brands such as Penfolds, Wolf Blass and Lindeman’s, said demand for bottles priced at £6 to £8 remains strong.