Couple celebrate lockdown marriage with Back to the Future-themed wedding 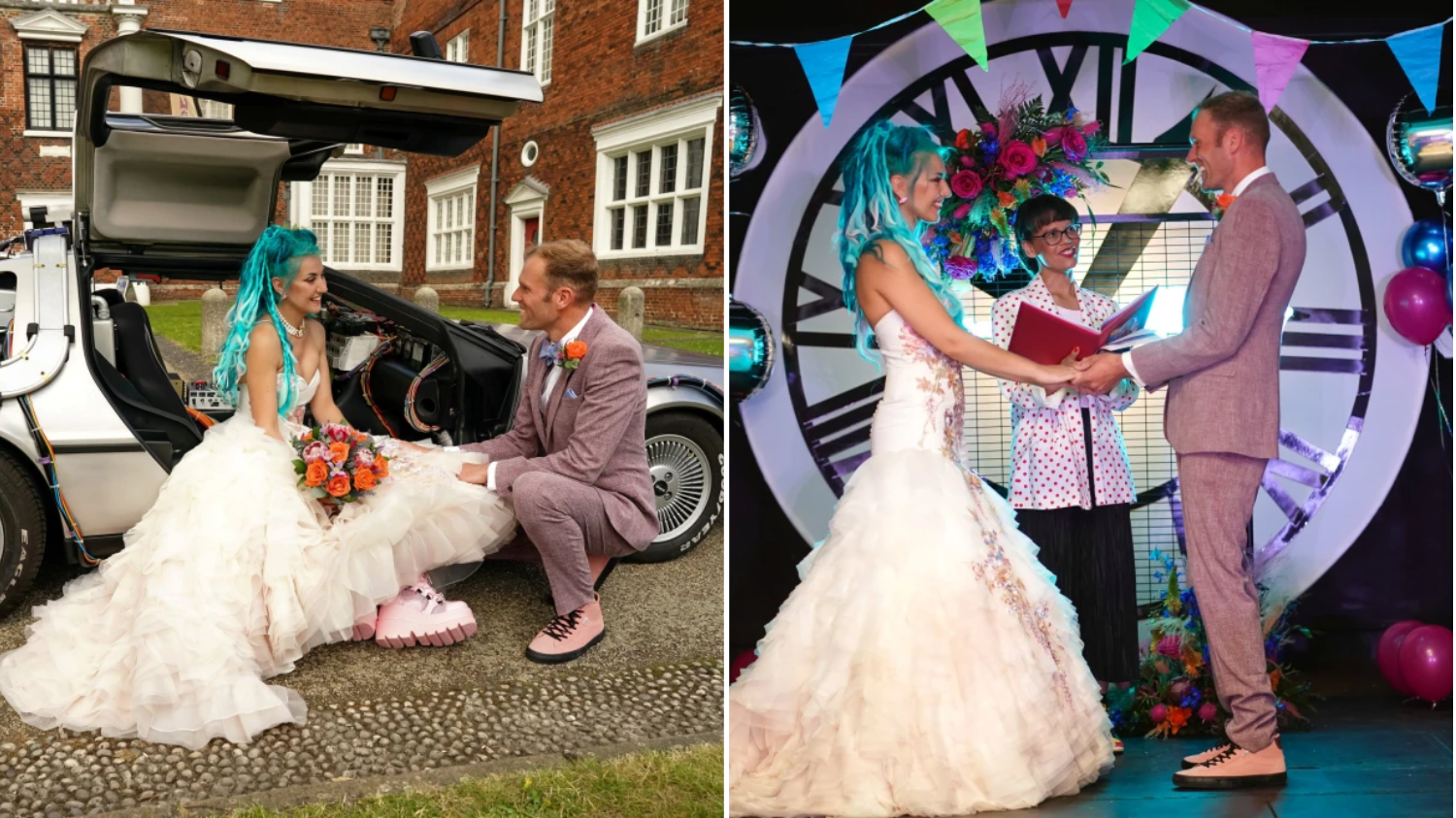 A couple finally celebrated their lockdown marriage in style – by paying homage to one of their favourite films at the delayed wedding ceremony.

Sci-fans Jordan and Pete Ayriss, from Ravenswood, Suffolk, decided to go all out with a Back to the Future-themed wedding – complete with a DeLorean car.

The couple, who have been together five years, tied the knot officially in May 2021 – with just their mothers and a registrar present at the restricted event.

So they knew they wanted to do something special for their delayed ceremony with family and friends.

Just over a year after their official marriage, on June 11 2022, Jordan and Pete welcomed 70 guests to the Manor Room, in Christchurch Mansion, for their themed nuptials.

They even arrived in style in the film’s trademark DeLorean car.

Pete, originally from Felixstowe, said: ‘We are huge fans – the Back to the Future films are one of the anchors for our relationship.

‘It is a completely iconic trilogy and something Jordan and I both bonded on immediately.”

‘I’ve never seen a DeLorean until our wedding day – never up close and definitely not sat in one.

‘It’s got everything in it: time circuits, the switches at the top, even a hoverboard.

‘It was the coolest thing and so special.’

The venue was decorated in-keeping with the theme, too – most of which Pete and Jordan did themselves, spending just under £5,000 in total on their special day.

Pete, who works internationally operating drones for the film industry, adds: ‘We had been planning it for years – it feels like forever.

‘The whole event was 50s, 80s, futuristic, with a bit of steampunk and Victorian.

‘We managed to transform the whole place – covering the hall in glittery curtains, posters and a hoverboard.

‘We’ve seen the show at the Adelphi theatre in London too, and we even nabbed little details from the theatre decor.

‘That gave us inspiration for the big clock that we made ourselves, just using a foamboard, black spray paint and bedsheet.’

Jordan, who owns a hairdressing salon, says the film has real sentimental value for the pair.

She adds: ‘Back to the Future was the first thing we found we both knew all the words too, all three films.

‘I don’t think I would have met him otherwise, we’re not in any of the same circles. I was able to find exactly what I was looking for.’

And it seems no details were spared as even the vegan cake topper referred to the films, with Pete dressed as Doc Brown and Jordan as Clara on a hoverboard.