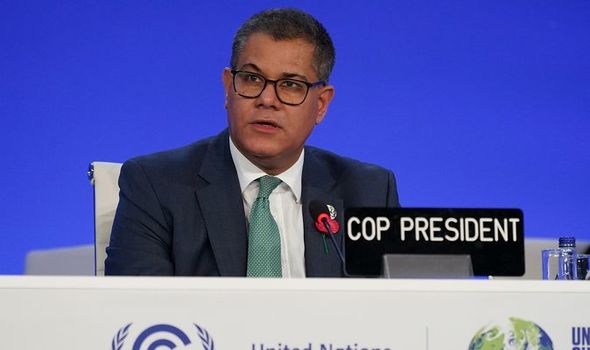 Mr Sharma’s warning came after Boris Johnson returned to the summit briefly on Wednesday to urge leaders not to sit on their hands and get a deal done. Overnight, new draft documents were expected to be published for negotiations that are still ongoing in a number of areas. These include providing finance for poorer nations to help them cope with climate change.

Under the Paris Agreement, countries pledged to take action to curb global temperature rises to “well below” 2C and pursue efforts to limit them to 1.5C. Scientists say anything above that will mean the worst impacts of climate change will be felt.

But United Nations secretary general Antonio Guterres warned that central goal was now “on life support”. He added: “The worst thing would be to reach an agreement at all costs by a minimum common denominator that would not respond to the huge challenges we face.”

Get the latest three-day weather forecast where you live. Find out by adding your postcode or visit InYourArea

And he insisted: “It is the moment to reach agreement by increasing ambition in all areas – mitigation, adaptation and finance – in a balanced way.” Mr Guterres described tackling climate change as the world’s “most important fight”.

Meanwhile, Climate Action Tracker yesterday said pledges made at COP26 on methane, coal, transport and deforestation could nudge the world nine per cent closer to the 1.5C target. The leading research group said the sectoral commitments announced in Glasgow represent potential cuts of 2.2 gigatonnes of carbon dioxide, equivalent to the emissions of Germany, Japan and the UK.

Niklas Höhne of the New Climate Institute, a partner of Climate Action Tracker, said the figures were still low – but could improve if more nations signed up to try to meet the target.

He said: “It is not surprising the effect of the COP26 sectoral initiatives is initially small. These initiatives are designed for those that do not sign immediately. The pressure of being put on the spot will help to grow the membership …and enhance the effect beyond national climate targets in the long run.”