Compromise in the jobs summit, confrontation in the foyer

Inside Anthony Albanese’s Jobs Summit in the Great Hall of Parliament, attendees twiddled on their phones or listened dutifully while business titans and unions delivered their carefully workshopped elevator pitches.

In the foyer it was a different story. 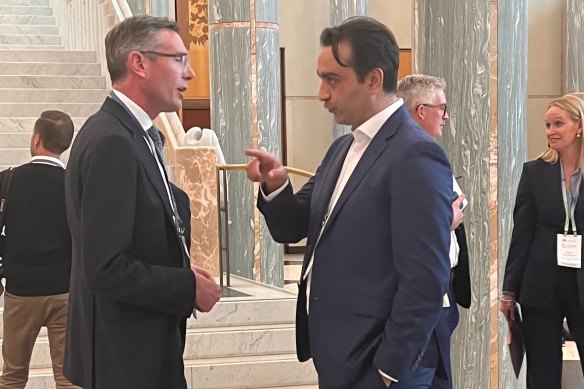 When the summit broke for afternoon tea, Rail, Tram and Bus Union national secretary Mark Diamond confronted NSW Premier Dominic Perrottet over his threat to tear up a pay deal for thousands of union members over ongoing industrial action about new trains and wages. The action has seen Sydney trains crowded, cancelled and delayed.

“I tried to speak with Dominic Perrottet,” Diamond told The Sydney Morning Herald and The Age after the several-minute long conversation. “It wasn’t received too well. I imagine that there have been some pretty heated conversations, which have been robust [during the bargaining process]. That, unfortunately, sort of was the same approach he took with me as well.”

Most of the conversation in the marble surrounds of the parliamentary foyer was inaudible as even Unions NSW boss Mark Morey joined in, but Diamond was clearly putting the view that the impasse was not the union’s fault and invited Perrottet to speak to ordinary rail workers.

Perrottet was having none of it. The two sides couldn’t even agree on the tone of the conversation.

“I wouldn’t say it was animated,” the premier said afterward. But Perrottet clearly wasn’t mincing words in his discussion with Diamond either. “I told him what they [the union] did to our city yesterday was an absolute disgrace,” Perrottet said. 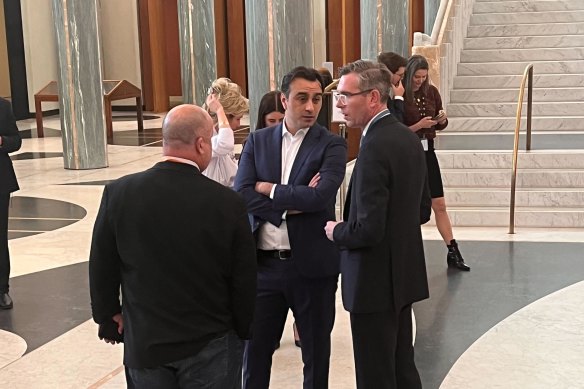 Unions NSW boss Mark Morey, with back to camera, joined the conversation.Credit:Nick Bonyhady

Compromise, it turns out, is much harder when it comes out of the abstract.

The real deals, several attendees observed, seemed to have been worked out beforehand or speaking elsewhere in parliament. 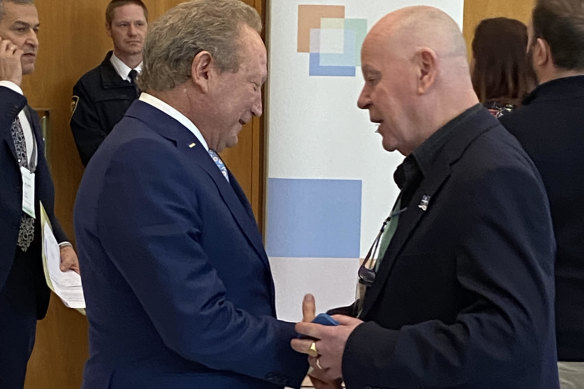 Other business bosses were sticking to the happy platitudes of an event that one attendee observed was running so smoothly it was “like clockwork, literally” and sometimes just as interesting.

Billionaire Visy packaging boss Anthony Pratt was firmly in the choir. “I think the Prime Minister has done a great job bringing everyone together… there’s a sense of… working together to advance the country,” he said, looking resplendent in a bright blue suit paired with black and lime green runners.

“It’s really interesting hearing a real common ground, but from some very different perspectives. And I think that’s really encouraging.”

Asked whether it was a change from when Scott Morrison ruled the roost, Holgate, who was infamously targeted by the former prime minister over a luxury watches saga, grew leery in an instant.

“Oh, that’s a bit too far for me,” she said, and disappeared back inside the conference hall, where media were not permitted to follow.