Climate change does not have a postcode, Treasurer Frydenberg says

Treasurer Josh Frydenberg says the impact of climate change will not be limited to postcodes, hitting back at criticism from his Nationals colleagues that it is only an issue for voters in affluent electorates.

Mr Frydenberg, who represents Kooyong in Melbourne’s eastern suburbs, held a joint press conference with fellow cabinet minister Bridget McKenzie on Wednesday, a day after she took a swipe at her Liberal colleagues over a net zero emissions target. 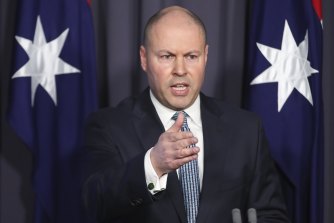 Treasurer Josh Frydenberg says there are constructive conversations happening within the Coalition about a net zero emissions target.Credit:Alex Ellinghausen

Australia is facing growing domestic and international calls to increase its ambitions to cut greenhouse gas emissions in the lead-up to a United Nations climate summit in Glasgow in November.

The government has set a target to reduce emissions by 26 to 28 per cent below 2005 levels by 2030 but has not set a hard deadline to reach net zero emissions.

A report by the Intergovernmental Panel on Climate Change in August found to have any chance of limiting the rise in global warming to 1.5C, the target set in the 2016 Paris agreement, the world needs to curb greenhouse gas emissions by 45 per cent by 2030 compared with 2010 levels.

On the basis of pledges by the 191 signatories to the Paris accord, emissions are on course to rise by 16 per cent by 2030, which could cause average temperatures to increase by 2.7C by the end of the century.

Mr Frydenberg said climate change was a “global challenge” that required “national solutions” and it was not a binary choice between the regions and jobs.

Mr Frydenberg said reducing emissions through a “well-considered, funded plan” would create jobs across the nation.

He said Australia, which has cut emissions by 20 per cent, had done so faster than Japan and Canada, the United States and the United Kingdom.

“We don’t need to pull down some to lift others up,” he said.

Senator McKenzie said her opinion piece in the Australian Financial Review was written to challenge the assumption that rural and regional Australians were anti-climate and she would be derelict in her duties if she did not assess the impact of government policy on rural constituents and industries.

“Agriculture is aspiring to get to net‑zero emissions by 2030, our beef guys, because they see an economic and a trade value to doing that.”

She said she did not back away from her comments and said she was determined to get to an outcome that ensured regional Australians didn’t pay the price for any greater aspiration taken to Glasgow.