The Labor Party will oppose the federal government’s proposed changes to expand the remit of the Australian Renewable Energy Agency to allow it to fund fossil fuel technology including carbon capture and storage and “blue” hydrogen which is produced with gas.

ARENA was established by the former Labor government to support innovative renewable initiatives and make it more competitive with established energy technologies. 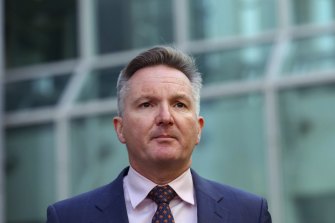 Energy Minister Angus Taylor has proposed a change to ARENA’s mandate to enable it to administer funding to support the government’s technology road map, which aims to work with the private sector to stimulate investment in lower emissions technologies that are selected for their commercial prospects.

Labor’s climate and energy spokesman Chris Bowen said the Opposition would oppose the regulation changes, which are subject to a vote in Parliament as a disallowable instrument of legislation.

“ARENA and CEFC are two of Labor’s most important achievements when it comes to a renewable economy,” Mr Bowen said.

“I’ll give you a hint. The R in ARENA stands for renewable. That’s his job. And that’s the job Labor will defend Angus Taylor’s regulation against, which will give him the power to assert that new technologies are low emissions in the future.”

Mr Bowen said it was “utterly unacceptable” to give Mr Taylor the power to determine what is called a low emissions technology and called on crossbench senators to oppose the changes.

Mr Taylor has said he wants to broaden the scope of Australia’s clean energy agencies to make them “technology neutral” and drive down Australia’s emissions without imposing taxes on the private sector.

The proposed changes set up a political wedge for Labor which is divided internally between its left faction, which is generally opposed to funding for any fossil fuels, and right-wing members who want the party to appeal more to blue collar workers with support for legacy energy industries.

“Labor have walked away from blue collar jobs. Now they’re walking away from jobs in energy efficiency, hydrogen and electric vehicles,” a spokesman for Mr Taylor said.

The changes to ARENA’s mandate would enable it to oversee funds in addition to the $1.4 billion allocated in the federal budget last year, including $47 million for industrial energy transformation studies, $20 million for freight energy productivity, and $72 million for future fuels strategy to fund hydro electric and biofuel vehicles.

In August Mr Taylor lodged a bill to enable the Clean Energy Finance Corporation to administer a $1 billion Grid Reliability Fund for gas power and infrastructure projects, which would come on top of the $10 billion clean energy fund it already administers.

The government delayed the introduction of the bill after Nationals backbencher Barnaby Joyce infuriated colleagues by lodging an amendment to the bill to allow the CEFC to fund coal fired power.

Department officials told estimates they had drafted a bill to change ARENA’s legislation but the government had opted for a regulation change. The department sought legal advice which they said showed the new regulations were sound.

While the government can legislate to expend the remit of energy agencies it remains to be seen what technologies are favoured by the boards which manage them.

ARENA and the CEFC must comply with investment rules that require them to not only fund new technology but also deliver value for taxpayers’ money.