SWELTERING Brits are panic buying fans in a bid to keep cool as temperatures of up to 40C are expected to sweep the country today – and some shops are selling out.

The mercury is expected to soar to an "unprecedented" 40C, smashing the current record of 38.5C set in Kent in August 2003. 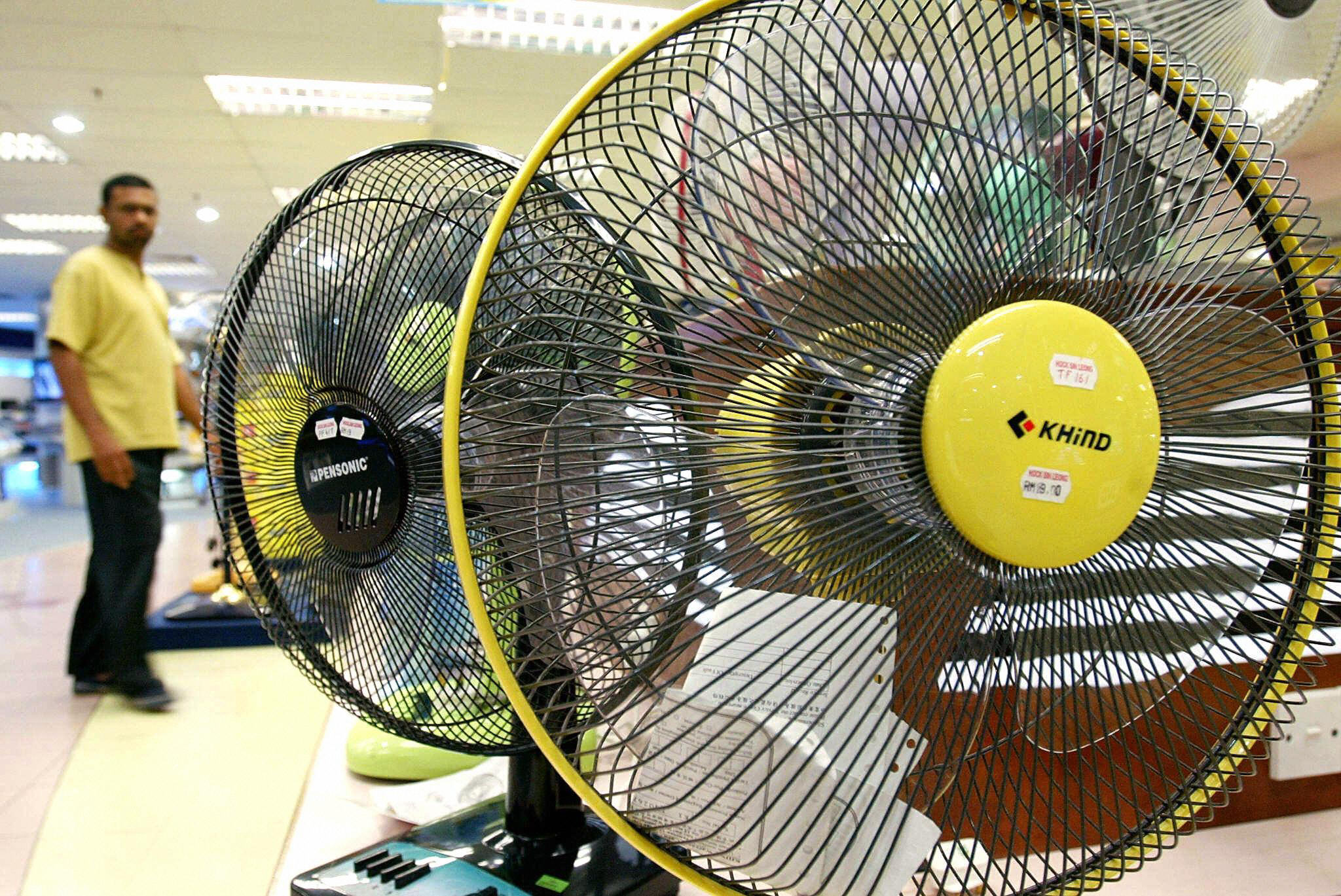 But this has seen Brits clearing their local stores of fans. Sales of fans have increased by 591 per cent compared to last week at online store AO.com.

Currys PC World says fan sales are up 200 per cent, while John Lewis and Partners reports increases of 120 per cent – selling six fans a minute earlier this week.

Of course, given the weather wasn't as hot in this UK last week it's perhaps unsurprising that sales have rocketed.

But while the majority of the retailers The Sun checked still appear to have online stock of fans, shoppers report that some supermarket shelves have been cleared. 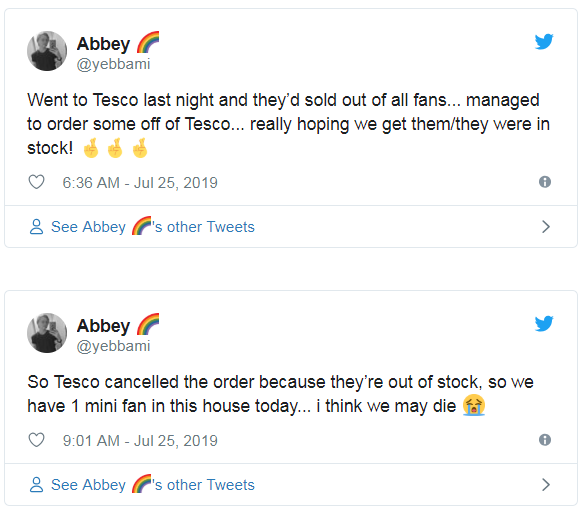 One Twitter user called Abbey wrote: "Went to Tesco last night and they’d sold out of all fans… managed to order some off of Tesco… really hoping we get them/they were in stock!"

But she later updated her Twitter to report that her order had been cancelled as the fans were now out of stock.

She followed-up: "So Tesco cancelled the order because they’re out of stock, so we have one mini fan in this house today… I think we may die".

Another Twitter user reports that his local Asda and Tesco stores have sold out, saying: "Finally sourced a new fan.

"Tesco and Asda JUST sold out but luckily my Dad just happened to have a brand new one spare. Lifesaver."

Someone else thought they'd snapped up the last fan in their local Asda, only to find out it was actually a heater.

He tweeted: "Just flew up to Asda the women said they’d sold out… found this little beauty lying around and thought I’d hit the jackpot and bought it for tonight to replace my big one… it’s a f***ing heater not a fan."

Another Twitter user wrote that while her local Purley store in London had sold out of pedestal fans (freestanding fans that you can put on the floor), it did still have desk fans left. 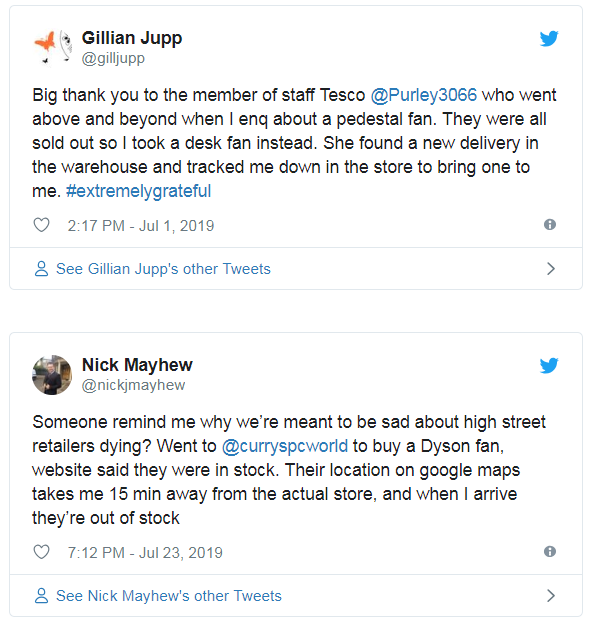 She said: "Big thank you to the member of staff Tesco @Purley3066 who went above and beyond when I enquired about a pedestal fan.

"They were all sold out so I took a desk fan instead. She found a new delivery in the warehouse and tracked me down in the store to bring one to me. #extremelygrateful"

Someone else experienced problems in their local Currys PC World, writing: "Someone remind me why we’re meant to be sad about high street retailers dying?

"Went to @curryspcworld to buy a Dyson fan, website said they were in stock. Their location on google maps takes me 15 min away from the actual store, and when I arrive they’re out of stock."

But it's not just fans that stores are selling out of in the heat, with some shoppers reporting that their local Asda and Tesco's are also all out of ice cream.

One Twitter user wrote: "I went to Asda with my swollen feet and all the ice cream was sold out."

While another said: "The massive Tesco near us has nearly sold out of ALL ice creams."

When The Sun put this to Tesco and Asda, Tesco declined to comment, while Asda hadn't responded at the time of writing.

And other shoppers say cooling mats and shaded sun loungers for pets are also out of stock in many of their local discount stores.

If your local stores still have fans in stock, Argos is selling a remote control fan that is perfect for hot nights.

While Aldi is selling a stunning copper 16 inch desk fan for a bargain price.