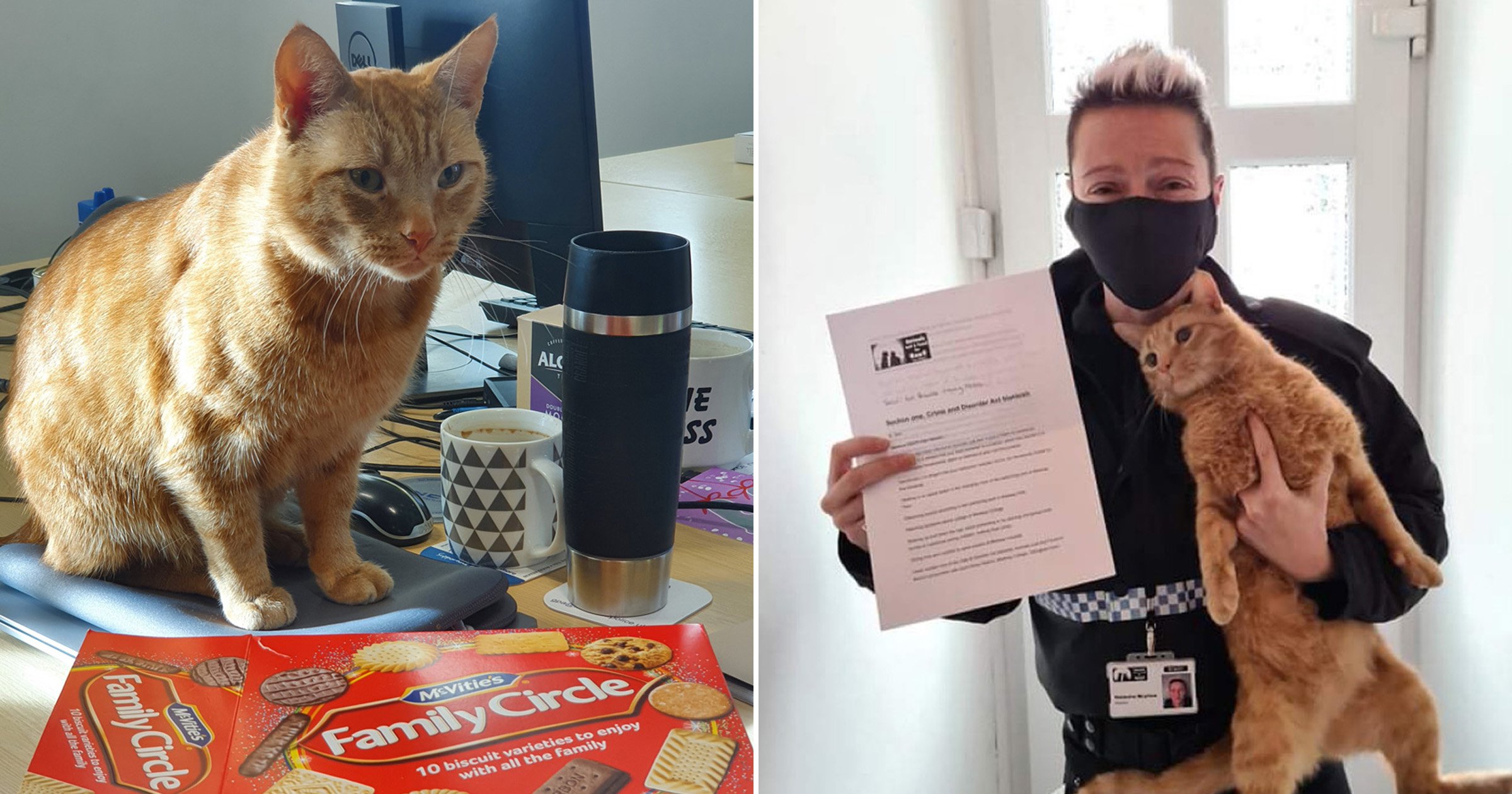 This is Bob, the very mischievous cat who has got into trouble for a laundry list of offences.

They include sneaking into a police station to steal biscuits, ‘harassing’ local students, walking in on women in swimming pool changing rooms and pretending to be starving to swindle food from strangers.

He’s wreaked gentle havoc on the Medway towns in his stomping ground, with Natasha McPhee, director of non-for-profit organisation Animals Lost and Found in Kent (ALFIK), even mocking up a cat ASBO for him.

Natasha met Bob after numerous people reported him to ALFIK as a stray.

She reunited him with his owner and soon found that the silly boy is infamous in his home of Gillingham, Kent.

‘His current owner found him and said he was really friendly, so she thought he must’ve had a home.

‘She took him to the vets, but they had no luck finding his owners, so he came home with her.

‘Slowly but surely, we started getting more and more pictures of this cat being posted on the Animals Lost and Found Facebook page, and then Kent Police posted a photo online saying he’d got into the station and started stealing their biscuits.’

Indeed, earlier this month, Medway Police tweeted a photo of the cheeky lad sat next to a tub of biscuits, with the caption: ‘We appear to have adopted a Medway Police Station cat.

‘No matter how many times he is escorted out of the building he returns to stalk the Christmas biscuits.

‘No chip but clearly well cared for if anyone is missing this little fella?’

Natasha, 38, thought it would be fun to set up a poll on the ALFIK Facebook page, which has more than 35,000 members, to find out who the public thought was the naughtiest pet of all in their area.

Other notorious local animals include Betsy the cat who has a ‘homeless and starving’ scam down, and Enki the bird who likes to ‘fly out of nowhere’ and attack people.

‘We get pets that are constantly coming up on our radar, like Bob, so we just thought we’d have a bit of fun with it really,’ said Natasha.

‘To lift everyone’s spirits at Christmas, with all the bad news at the moment.’

Perhaps unsurprisingly given his thieving past, Bob won the coveted title of the most delinquent cat in Kent, prompting Natasha to draft up his mock ASBO.

One person commented under the poll: ‘It’s gotta be Bob for my vote seeing as he’s brave enough to enter a police station and steal their hearts from under their noses and walk out without a care in the world. Plus, he’s gorgeous.’

‘Bob the master criminal, breaking and entering, evading capture, and theft within the confines of the police station, is pretty slick,’ wrote another.

His ASBO reads: ‘Your name has been referred to Animals Lost and Found in Kent on numerous occasions. It is alleged that you have behaved in a manner which has caused or is likely to cause harassment, alarm or distress to your non-furry parent.

‘Specifically, it is alleged that your behaviour includes (but is not necessarily limited to) the following:

‘Walking into naked ladies in the changing room of the swimming pool at Medway Park.

‘Observing people swimming in the swimming pool at Medway Park.

‘Walking up and down the high street pretending to be starving and giving head bumps to numerous young children, making them smile.

‘Giving love and comfort to upset people at Medway Hospital.’

The letter concludes with: ‘Because you are a cat and cannot read, a copy of this notice will be served on your Parent/Guardian.’