Trainer Bob Baffert on Tuesday acknowledged his horse Medina Spirit was treated with an ointment containing a steroid in the days leading up to the Kentucky Derby. The statement comes after racing officials said the horse tested positive for Betamethasone, a substance that violates the race’s rules.

Baffert said a veterinarian checked on Medina Spirit and treated the horse’s dermatitis with the ointment Otomax, which contains betamethasone. Baffert said he learned the banned substance was in the ointment on Monday and the horse was treated with it daily until the day before the Derby.

“While we do not know definitively that this was the source of the alleged 21 picograms found in Medina Spirit’s post-race blood sample, and our investigation is continuing, I have been told by equine pharmacology experts that this could explain the test results,” the statement said. “As such, I wanted to be forthright about this fact as soon as I learned of this information.”

Still, Baffert maintains that the positive result had no effect on the outcome of the race. “Medina Spirit is a deserved champion and I will continue to fight for him,” he said.

The horse racing world is anxiously awaiting the second round of test results, which will be performed at a different lab. If a second test is positive, Medina Spirit could be stripped of his Kentucky Derby crown and the $1.8 million purse that came with it. The horse would then become just the second Derby winner to be disqualified over medication. 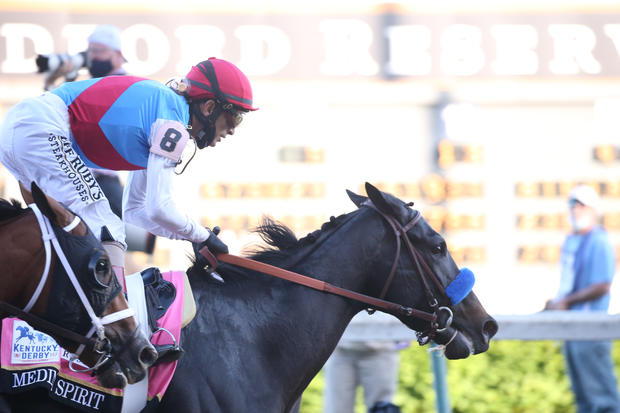 Baffert previously denied treating the horse with a steroid and called Medina Spirit the victim of “cancel culture.” But over his four-decade career, his horses have been flagged with at least 30 medication violations. Five of those were in the last year, though some were overturned on appeal.

If the second test results aren’t back in time for Saturday’s race at Pimlico Race Course, racing officials will decide if Medina Spirit can participate. If the horse is blocked, Baffert’s attorney told CBS News he’ll likely file a temporary restraining order, forcing the matter into a courtroom.