‘I am embarrassed and heartbroken’: Black woman blasts racist Eastern European passenger on Spirit Airlines who ‘REFUSED to sit next to her’ – while slamming staff who ‘allowed her to block the seat’

A black woman has claimed that a racist Eastern European passenger refused to allow her to sit beside her on a Spirit Airlines flight, detailing the ‘heartbreaking’ incident in a series of Facebook posts, while also slammed flight attendants who did nothing to prevent the woman’s bigoted behavior.

Detroit-native Tiarra Dowdell shared a series of detailed Facebook posts about the experience, which she said left her feeling ’embarrassed’ and ‘heartbroken’.

Tiarra explained that she went to take her seat on a Spirit Airlines flight from Las Vegas to Chicago on Tuesday, June 25, when a white woman who was sitting in the seat next to her refused to allow her to sit down beside her. 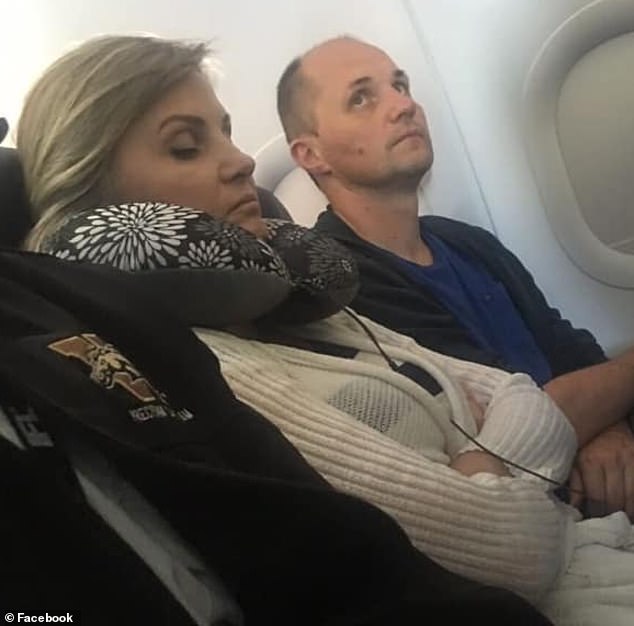 Shocking: Facebook user Tiarra Dowdell has revealed that a white woman (pictured) refused to allow her to sit next to her on a Spirit Airlines flight 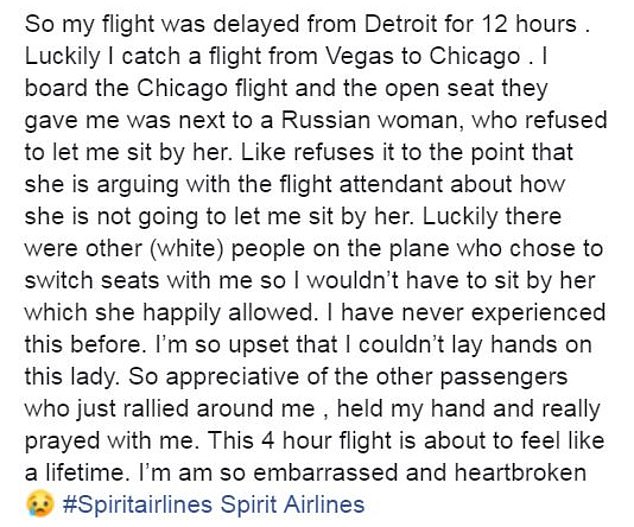 Woah: Tiarra, from Detroit, detailed the horrendous incident in a series of now viral Facebook posts, as she explained the incident that left her ’embarrassed’ and ‘heartbroken’ 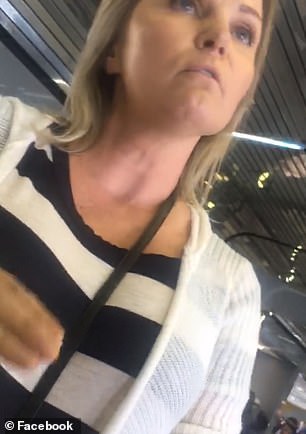 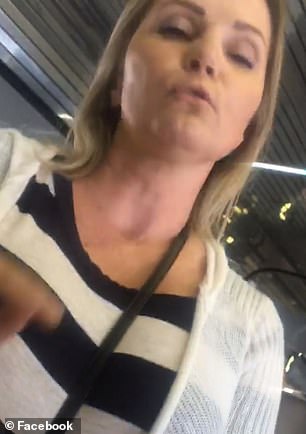 Yikes: Tiarra followed up her first post with another lengthy post, as well as a snippet of a video clip that briefly showed the woman who had refused to sit beside her ‘attempting’ to apologize

In one of her now viral Facebook posts, she revealed that the woman that was she was supposed to sit next to on the flight ‘refused’ to let Tiarra sit down.

She wrote: ‘So my flight was delayed from Detroit for 12 hours. Luckily I catch a flight from Vegas to Chicago.

‘Luckily there were other (white) people on the plane who chose to switch seats with me so I wouldn’t have to sit by her which she happily allowed,’ she added.

Tiarra explained that the woman’s actions left her embarrassed and heartbroken, and that she has never received such treatment.

‘I have never experienced this before,’ she said, ‘I’m so upset that I couldn’t lay hands on this lady. So appreciative of the other passengers who just rallied around me, held my hand and really prayed with me.

‘This four hour flight is about to feel like a lifetime. I’m [sic] am so embarrassed and heartbroken,’ she concluded.

Since her post was shared, it has accumulated 15,000 likes and a further 8,000 shares. Similarly, people have revealed their shock at the situation in the comments on the post.

One Facebook user wrote: ‘I am so sorry you had to experience this! People are disgusting.’ Another said: ‘She’s sick! Definitely file a complaint. They should’ve put her off.’

Tiarra followed up her first post with another lengthy post, as well as a snippet of a video clip that briefly showed the woman who had refused to sit beside her ‘attempting’ to apologize. 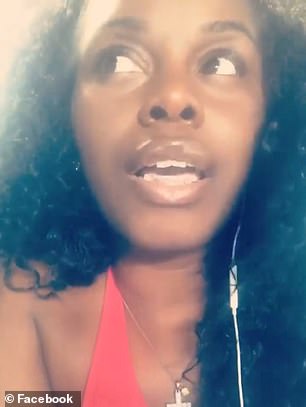 Defense: Although many have asked her why she didn’t physically harm the woman, she said she didn’t want to be remembered for hurting someone

She wrote: ‘Mind you she allowed the young white college student to sit next to her with no issue.

‘Immediately after we landed she rushed off requesting a supervisor to complain to because the passenger were booing her and calling her a racist.

‘She said her not letting me sit down had nothing to do with me being black but simply because she thought the seat was going to be empty,’ Tiarra added.

She went on to explain that she was unimpressed with the way the situation was handled by flight attendants on the flight.

Tiarra said she thinks the flight attendants ‘should have made her move’ after the woman refused to sit beside her.

‘I shouldn’t have needed to switch seats to accommodate her choice of what race she wanted next to her and her husband. I had to ask someone to switch seats with me because she didn’t want to sit by a black woman in 2019!!!!

‘The attendants thanked me multiple times for being a team player… I said why do I have to be a team player to someone who is obviously putting her racist cards on the table. 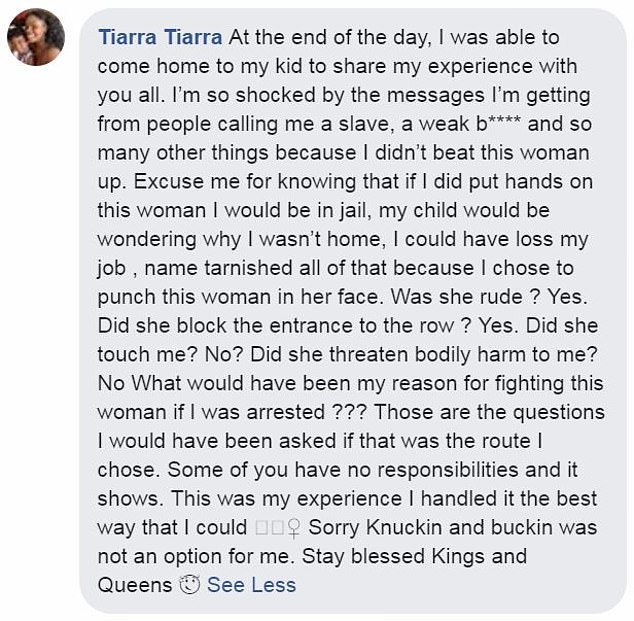 Experience: In a comment on her video, Tiarra said she handled the situation ‘the best way’ that she could, adding that she knew if she ‘put hands’ on the woman, she would ‘be in jail’

‘Them allowing her to block the seat should have been enough for them to escort her off the plane.

‘But obviously her being comfortable was more important, maybe I was asking for too much,’ she added, before jokingly ‘thanking’ Spirit Airlines for the ‘worst experience ever’.

Tiarra later shared a video that saw her talking to her camera. In the clip, she thanked fellow Facebook users for supporting her through the experience.

‘I definitely want to thank you guys for being so supportive,’ she said. ‘That was definitely one of the worst experiences I have ever, ever went through. ‘I’m definitely filing a complaint with corporate,’ she added, as she stressed the fact that she was unhappy with the way staff on the flight handled the situation.

She said that, although many have asked her why she didn’t physically harm the woman, she said she didn’t want to be remembered for hurting someone.

‘When you’re really just put in that position and you have 150 people watching you, waiting for you to react, to be that angry black woman, I felt like I couldn’t defend myself because that’s exactly what I was going to be regardless of what she did,’ she said.

Tiarra went on to explain that she thought that if she became aggressive with the woman, it would have been what the people on the flight would remember her for.

In a statement to Yahoo Lifestyle, Spirit Airlines said it has taken action to remedy the incident, as the airline has a ‘zero tolerance for discrimination of any kind on our flights’

‘[Spirit Airlines has] launched an investigation into this incident and we have reached out directly to the Guest to address her concerns,’ a statement from Spirit Airlines media relation manager, Derek Dombrowski, read.

‘Spirit Airlines has zero tolerance for discrimination of any kind on our flights and we pride ourselves on providing an inclusive and safe environment for our Guests.’