Top Gun: Maverick has continued the resurgence of cinema-going and is already on the verge of overtaking Titanic and Star Wars: The Last Jedi inside the top 10 at the Australian box office.

In just 25 days, the long-delayed sequel to Top Gun has taken a stunning $56.4 million. Now expected to double initial cinema industry projections that it would take $30 million, it is closing in on the top five at the all-time box office.

Director Joseph Kosinski’s movie has become the second biggest hit since cinemas reopened earlier in the pandemic, behind only Spider-Man: No Way Home, which has taken $81.1 million since opening just before Christmas.

Data from Numero, a box-office analysis provider, shows that Maverick returned to top position on the Australian box office chart on the weekend, taking $6.9 million, after being briefly surpassed when Jurassic World: Dominion opened the previous weekend.

While it was heavily promoted, its success reflects positive reviews and excellent “word of mouth” – the industry term for recommendations to friends and family.

The movie, which has Tom Cruise’s Maverick training a new generation of fighter pilots for a high-risk mission, has already reached number nine in Australian box office history after overtaking The Avengers ($53.5 million) and Bohemian Rhapsody ($55.4 million).

It has been credited with drawing back both older viewers who are fans of the original Top Gun and those who only go to cinemas rarely.

Globally, Maverick has taken $US887 million ($1.27 billion) and is expected to break $1 billion despite not being released in China.

While it should overtake Titanic’s $57.7 million any day now, Screen Australia data shows tickets when James Cameron’s hit was released cost an average of $7.47. By last year, the average had more than doubled to $15.24. 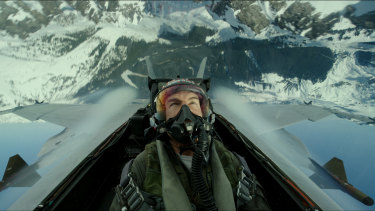 The biggest hit at the Australian box office is still Avatar, which took a phenomenal $116 million in 2009, when tickets averaged $11.99.

The cinema-going revival is positive news for Baz Luhrmann’s Elvis which opens this week.