Beyoncé Is The Star Of The Night, Dripping In Diamonds In Newest Tiffany & Co. Campaign

American singer-songwriter and actress who achieved fame in the late 1990s as the lead singer of the R&B group Destiny’s Child and then launched a hugely successful solo career Beyoncé’s Renaissance has felt (unsurprisingly) flawless, from the irresistible energy of its dance-focused tracks to the ultra-stylish imagery that’s been released since the earliest teases of this seventh solo album. A master class in high fashion, both the still images and teaser videos connected to Renaissance have featured Beyoncé wearing custom looks from coveted labels that range from Gucci and Alaïa to Schiaparelli and Mugler, as well as Los Angeles-based artist Nusi Quero, who crafted the piece the superstar wears while poised atop a holographic horse on the album’s cover, an image meant to evoke thoughts of Lady Godiva.

But beyond those teaser videos, plus the official “Renaissance” lyric videos, there have been no full music videos yet released in support of the album. Today, fans who have been waiting to see more of Beyoncé in action have something new to watch, per The Hollywood Reporter.

Beyoncé — whose year-old partnership with Tiffany & Co. includes starring in its just-released ad campaign “Lose Yourself in Love” — has now released a film with the jewelry house for the finale song on Renaissance, “Summer Renaissance.” The black-and-white film was directed by Grammy Award winner Mark Romanek (“Scream,” “Got til It’s Gone,” “Hurt”); a 30-second version of the video can be seen below.

Sampling Donna Summer’s 1977 megahit “I Feel Love,” the film for “Summer Renaissance” is infused with a Studio 54 vibe throughout, with both Beyoncé and several of the 90 dancers who surround her wearing signature Tiffany & Co. jewels. Fashion photographer Mason Poole lensed the still images of the campaign, while Beyoncé’s longtime stylist, Marni Senofonte, who also worked on the artist’s 2016 Lemonade, worked with stylist and Vogue Italia editor-at-large Patti Wilson on the campaign. Fatima Robinson, whose work includes Pharrell Williams’s “Happy” and Meghan Trainor’s “All About the Bass,” was the choreographer on “Summer Renaissance.”

On Tuesday (October 4), guests attended Club Renaissance in celebration of Beyoncé’s globally lauded album ‘Renaissance,’ which started with the launch of the ‘Lose Yourself In Love’ Tiffany & Co. campaign anthem film, featuring Beyoncé.

This seems like a lot of bling, but I have a feeling that her jewels aren’t the first thing you see when you look at this picture.

I have a feeling that some will feel too much is on display, but I’m absolute​ly​ in a trance​ because I think she looks beautiful.

The dress is hugging her in all the right places. I adore this color at this time of year, and it is looking particularly scrumptious on Mrs Carter, according to the Red Carpet Fashion Awards. In the film, shot by Grammy winner Mark Romanek, Beyoncé, 41, is wearing head-to-toe custom creations alongside Tiffany & Co. jewelry. One of the pieces Beyoncé is rocking is a Tiffany & Co. engagement ring in platinum with an internally flawless, round brilliant diamond of over 10 carats, as well as pieces by legendary Tiffany & Co. designer Jean Schlumberger. Beyoncé, who was styled by Marni Senofonte and Patti Wilson, is joined by a huge cast of supporting characters in the film, which is meant to look like a vintage New York City club from the 1970s, with a little bit of Beyoncé flair. The supporting cast — who bring life to the background of the film — are also outfitted with Tiffany jewels for a fully immersive experience. 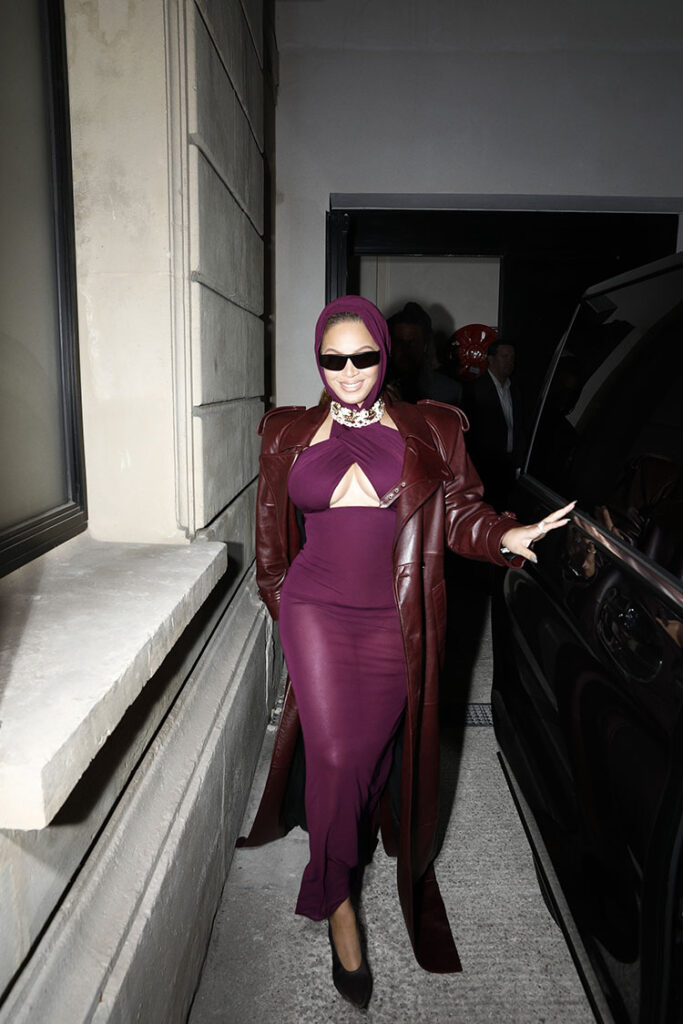 In fact, Beyoncé even finds herself perched atop a jewel-encrusted horse in this new campaign, taking the visual of these ads to a whole new level.

Tiffany & Co.’s Lose Yourself in Love campaign is part of the brand’s outreach for underrepresented communities. The jeweler also launched Tiffany Atrium, a social impact platform working alongside Beyoncé and husband JAY-Z to provide scholarships. According to a press release, in 2021, Tiffany & Co. pledged $2 million in scholarship funding for students in the arts and creative fields at HBCUs through 2024. That scholarship money has so far been awarded to more than 60 students.

The “Alien Superstar” singer has been working with Tiffany & Co. for years, starring in a number of campaigns, sometimes alongside her husband and even daughter Blue Ivy.

Romanek’s black-and-white film for Renaissance was shot using a rare 65mm camera and was conceptualized as an exploration of fearless creativity, says Alexandre Arnault, executive vp product and communications for Tiffany & Co. “‘Lose Yourself in Love’ embodies the beauty of self-love and empowered elegance,” he notes. “Beyoncé is an inspiration to so many because she embodies these qualities. We are honored to continue our partnership for the second year in a row and usher in an exciting new era of love.”