Australia’s defences stronger after 20 years of the war on terror: Howard

Australia has a stronger defence against extremist threats after 20 years of the war on terror, former prime minister John Howard has declared amid a warning from his successor Kevin Rudd about the growing danger from the Taliban’s victory in Afghanistan.

Mr Howard said Australians were safer from two decades of conflict after the terror attacks in New York and Washington on September 11, 2001, but he acknowledged a series of US strategic mistakes including the rushed retreat from Kabul in recent weeks. 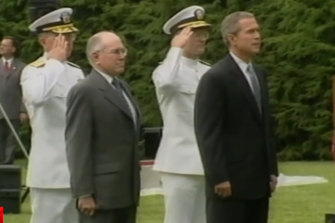 Former Australian prime minister John Howard was in the United States celebrating 50 years of the alliance with former US president George Bush during the September 11 attacks.Credit:Sky News

“I think because of what’s been done, it’s probably less likely that something like September 11 will happen again, but that’s very hard to answer,” Mr Howard said on whether the threat of Islamist terror was any smaller today.

“I can’t say other than that we are better prepared, we’re more alive, we have better mechanisms, our intelligence gathering arrangements, which are extremely valuable, are probably superior to what they were 20 years ago.”

The Watson Institute of International and Public Affairs at Brown University in the United States estimates the US wars since 2001 have cost $US6.4 trillion, led to 801,000 deaths as a direct result of fighting and displaced another 21 million people.

There is no equivalent Australian estimate but Mr Rudd told The Sydney Morning Herald and The Age that the war in Afghanistan had probably cost the nation $15 billion in direct military spending.

“The whole framing of these engagements as a war on terror was misplaced,” Mr Rudd said.

“Afghanistan was about removing a regime which gave succour to one terrorist organisation, al-Qaeda, but Iraq did not add up to a war on terrorists at all. In fact, it created a new breed of terrorists, who then brought mayhem across the entire Middle East.

“So in terms of that counter-terrorist objective in Iraq, it’s been a massive failure.”

Another former prime minister, Tony Abbott, said Australia’s response had helped make sure there was no further attack on the scale of September 11, but he said the fall of Kabul showed the extreme danger continued.

“The bursting into our lives of radical Islamism was a sign that history had not ended with the triumph of liberal democracy and the emergence of China has made these times the most dangerous since the height of the Cold War,” Mr Abbott said.

“I fear we are now called upon to maintain a level of military readiness not seen for at least a generation and for which we are mentally ill-prepared.”

One challenge, Mr Abbott added, was the “collapse of self-confidence” and the “culturally corrosive woke movement” in the West.

Mr Howard was in Washington DC for talks with George W Bush, then US President, when terrorists hijacked four aircraft and flew two of them into the World Trade Centre in Manhattan and the third into the Pentagon in Washington DC. Investigators believe the passengers on the fourth plane, UA93, overcame the hijackers before it crashed. The attacks killed 2977 people and injured more than 6000.

Speaking ahead of the anniversary of those attacks, Mr Howard said his government had been right to invoke the ANZUS treaty with the US and join its ally in the war in Afghanistan weeks after the attacks, as well as joining the invasion of Iraq in 2003.

Mr Howard faulted the US, however, for mistakes such as dismantling the Iraqi army and purging the Iraqi government in a “de-Ba’athification” program that fuelled resistance to the US and its allies.

Asked if Australians should be more reluctant to follow the US into battle after the cost of the conflict over two decades, Mr Howard said he was confident in the strength of the ANZUS alliance because of the shared values between the US and Australia.

“It is very important arising out of this that we don’t lose faith in the value of the American alliance as the ultimate security guarantor,” he said.

“It doesn’t mean we shouldn’t spend a lot of money on our own defence – when I was in government I always gave a higher priority to defence spending than just about anything else, and I continue with that view.

“But I think it would be very foolish to see any realignment of the American alliance – that would be a huge mistake.”

Mr Howard has criticised the Biden administration for its retreat from Afghanistan including the decision to name a date for the withdrawal, emboldening the Taliban, but he said it was wrong to see the events as proof of American decline alongside the rise of China.

‘I think because of what’s been done, it’s probably less likely that something like September 11 will happen again.’

“Well, I don’t think it confirms the rise of China, unless you argue that it’s been an American retreat and therefore automatically China has filled the void. That’s always a pretty precarious sort of argument to mount,” he said.

“I think the strengths and weaknesses of China vis-a-vis America are still there, irrespective of what’s happened. There’s no strategic link between what’s happened in Afghanistan and what may or may not happen in relation to China and Taiwan, none whatsoever.

“I think the big change in China has been for a period of close to 15-plus years China was governed by people who believe in cooperating with the West, it’s now governed by somebody who has become very belligerent towards the West.

“I don’t think that’s the fault of the Americans or any American administration.”

Mr Rudd cautioned that the US retreat from Afghanistan could lead to another safe haven for terrorists, increasing the threat, but he agreed with Mr Howard that this did not mean the US was weakened in its dealings with China.

“Were the Chinese, in particular, to be tempted to use this, in my judgement, strategic error of the US to withdraw from Afghanistan and the way in which it’s been done, to test American mettle in East Asia somewhere, that would be a deeply flawed decision,” Mr Rudd said.

“The politics in Washington now, informed by the political backlash against what happened in Kabul, will be to double down in reaction to any provocation either by the Russians or the Chinese. I would hope the hard-heads in Beijing understood that.”

In the longer term, however, there would be a debate about American “staying power” and this meant Australia had to rely on its own strengths rather than the ANZUS Treaty.

“It would be unwise for any Australian government, or alternative government, to assume that in a decade’s time our national security interests can be predicated on the alliance alone,” Mr Rudd said.

“Prudent national security planning should cause us to factor in the possibility, or the probability, of a growing level of American global reluctance.”

On the central question about the war on terror – whether it had made Australians any safer – Mr Rudd said the US strategy had been unclear throughout much of the period.

Mr Rudd said defence chiefs told him soon after he became prime minister in 2007 that the rationale for the commitment to Afghanistan was “alliance maintenance” but that there was no certainty from the US on the strategic endpoint for the mission.

He said his response to this was to limit the Australian military commitment to one province, Uruzgan, and to set a timetable to remove those troops. They withdrew in 2013.

While the Bush administration put “forensic and formidable” pressure on Labor to support the invasion of Iraq in 2003, Mr Rudd said the war had increased the dangers from terrorism.

“We never had any doubts about our decision not to support the military invasion of Iraq. History proved us right and Howard should hang his head in shame for that decision, not least because of the impact in terms of number of Iraqi deaths but the subsequent destabilisation of the wider Middle East,” he said.

Mr Rudd said the invasion had increased Iranian power, sparked the rise of Islamic State, fuelled the civil war in Syria, led to millions of refugees seeking entry to Europe, which in turn had destabilised European politics and contributed to support for the British exit from the European Union.