Australia is taking its push for practical climate action to the world with Prime Minister Scott Morrison arguing that achievement counts more than ambition and Energy Minister Angus Taylor calling for international collaboration on decarbonisation.

Mr Morrison spoke with United States Special Presidential Envoy for Climate John Kerry on Wednesday morning and emphasised his ambition to reach net-zero emissions as soon as possible, preferably by 2050, but did not commit Australia to a specific deadline. 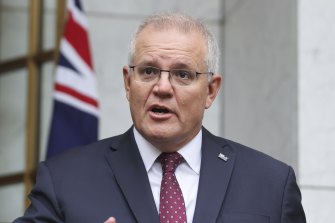 The Prime Minister emphasised Australia has already achieved a 19 per cent reduction in greenhouse gases since 2005 and told Mr Kerry that climate discussions must focus on nations’ achievements to date and not just their ambitions.

Separately, Energy and Emissions Reduction Minister Angus Taylor will promote Australia’s strategy for practical climate action at an international forum for energy ministers and officials and encourage other countries to collaborate on scaling up emissions reduction technologies.

Mr Taylor will be the first Australian Minister to represent Australia at the Berlin Energy Transition Dialogue, where 50 foreign and energy ministers and state secretaries are attending this year including Mr Kerry and European Commission President Ursula Von Der Leyen.

“Our technology-led plan will see Australia supporting global efforts to reduce emissions as we recover from the global pandemic,” Mr Taylor will say in his address on Wednesday night. “But Australia also recognises that we won’t be able to make these technologies globally scalable and commercially viable all on our own.”

Australia’s climate policy has faced scrutiny from countries that have committed to net-zero by 2050.

Mr Morrison has stopped short of committing to a deadline, arguing Australia’s climate policy would not be “set in any part of the world other than here”.

The European Union is threatening to levy carbon tariffs on Australian exports, and last month Mr Kerry flagged the US has “not been able to get on the same page” as Australia on climate policy.

Mr Taylor’s speech will map out Australia’s technology-focused climate strategy and encourage other countries to help scale up emissions reduction.

“We welcome ambition, but practical action and achievement are what actually matter,” Mr Taylor will say.

“Australia is already collaborating with our trading and strategic partners, including Germany, Japan, Korea, Singapore, the UK and the US. This year, ahead of (United Nations climate conference in November) COP26, we want to ramp up that collaboration.”

The Morrison government released its Technology Roadmap last year, which committed to spend $18 billion over the next decade to drive down the cost of hydrogen fuel production and low emissions technologies. It aims to attract more than $50 billion of private co-investment into targeted technology: soil carbon, carbon capture and storage, low emissions steel and aluminium, hydrogen fuel as well as energy storage for the electricity grid.

Australia’s new Chief Scientist Cathy Foley in her first speech in the role endorsed the roadmap, which she said the government had “every indication of implementing”. While the rollout of low emissions technology had been slow in past decades, Dr Foley said, the pace of developments like renewable energy growth in recent years was optimistic.

“We have begun to see in the last five years, the lifting up, and I hope we will be able to take that further so we’re looking back at the previous 20 years as something that was lessons learned as opposed to the beginning of a dark future,” she said.